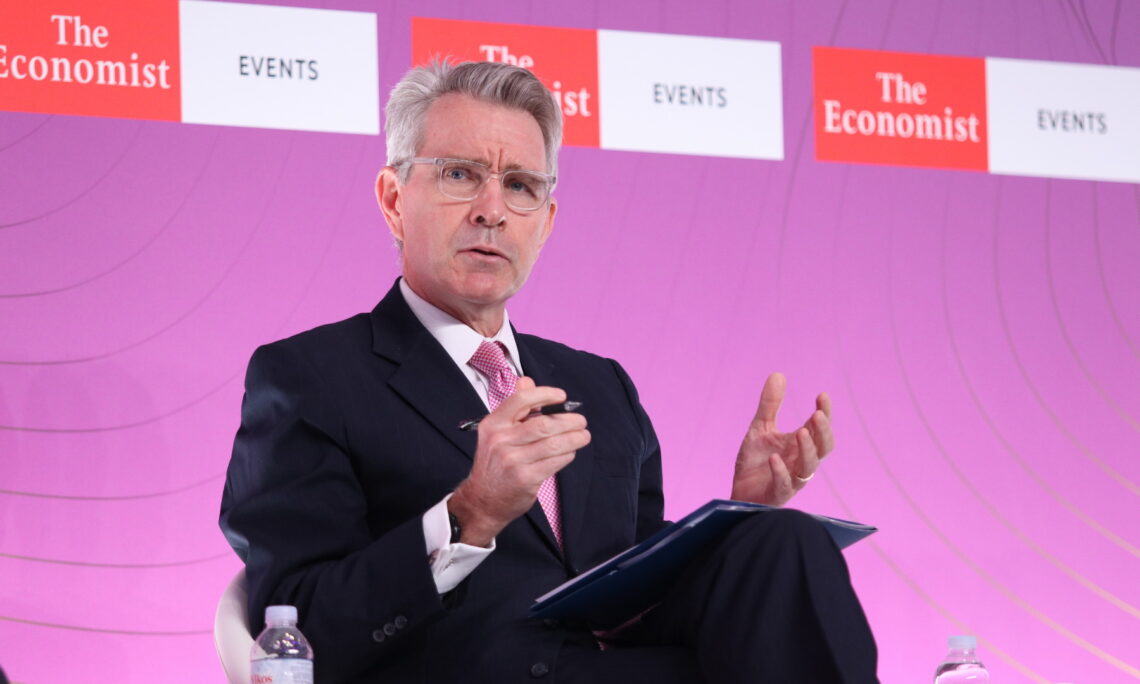 Thank you, Markos and let me start by saying thanks to The Economist for having me back.  This is my fifth government roundtable, but most importantly it’s my third time having the honor of appearing with Minister Panagiotopoulos.

In preparation for today, I did something I don’t often do, which is I went back and I looked at what did I say two years ago?  That was just a couple of days after the Mitsotakis government came to office.  My headline there was that we, the United States, are committed to taking the already strong U.S.-Greece relationship to the next level.

Then, when the Minister and I were together last year, I talked about how we were committed to working jointly to fill the opportunities that our expanded MDCA of October 2019 had provided.  And if I could have one message today, it’s to underline the high degree to which on both sides we really have delivered on that vision.  But not only have we delivered, but as President Biden has made very clear, we are committed now to working even harder and further deepening and strengthening our bilateral relationship, including, as the Minister referred to, the imminent expansion and deepening of our MDCA agreement.

I thought former Minister Ben-Ami did a brilliant job at describing all of the destabilizing forces that are swirling around the East Med.  The same of course could be said for the Western Balkans, for the Black Sea region.  What’s really impressive to me is how Greece has come to be seen in the United States as a stabilizing source of solutions across this 270 degree arc.

The United States looks to Greece as an essential partner.  Whether it’s working to support the countries of the Western Balkans continuing to move towards Euro-Atlantic institutions, stabilizing the Eastern Mediterranean and leveraging the opportunities for energy, for economic cooperation, building on the vision which lies behind our 3+1 cooperation — and I want to underline both the Biden Administration’s commitment to sustaining that project, but also since he is in the audience, the foundational role of David Harris in helping to enunciate that vision and setting us on that course.

I want to spend just a minute or two on our military cooperation, and to emphasize first and foremost that this is cooperation which is grounded in shared interests.  To a remarkable degree, we have arrived at a moment when the governments of Greece and the United States share a common vision for how this region should deploy itself.  And it’s that convergence of regional interests that has facilitated a dramatic deepening of our military cooperation.

I want to salute General Floros and all the service chiefs who are here today because I cannot overstate how important the partnership is that they have forged with their American counterparts. A couple of weeks ago General Floros, Minister Stefanis and the Army leadership and I were together up in Petrochori with General Cavoli.  For me, as somebody who’s spent 32 years working with U.S. military counterparts, to hear the way General Cavoli described both the opportunities existing in Petrochori, but also his profound respect for the professionalism and capacity of the Hellenic Armed Forces, was really impressive.

And Markos, you talked about your visits to Chania. The other thing that will be different the next time you go there is that now Souda Bay is the home port for U.S. Navy’s new expeditionary platform ship, the Hershel “Woody” Williams.  And really across the board, you look at where we are exercising and working together.  We have an American presence in Alexandroupoli.  We’ll  actually have three major rotations through the port of Alexandroupoli this month, and have made dramatic progress in bringing that asset back together.  We’re working together in Petrochori. We’re working together in Stefanovikeio, in Volos, and Andravida.  General Blioumis and I were together in this spectacularly impressive Iniohos exercise this year.

And then I should also say a special word about the Hellenic Navy, because I talked about our regional cooperation. What’s important to me now is that cooperation is going beyond Greece’s immediate periphery.  I would point, for instance, to the recent visit of Indian Foreign Minister Jaishankar and the exercise between the Hellenic Navy and the Indian Navy south of Crete, just a few days thereafter.  It is a reflection of how Greece is developing a more strategic and more ambitious foreign and security policy, which the U.S. government strongly supports.  Because we are two democracies, as President Biden has emphasized, we have a common outlook on the world, common values and common interests.

The last point I’ll make since my time is up is just to emphasize how important it is that we have sustained the progress of this relationship and this agenda through three U.S. presidential administrations.  I was sent here by President Obama, and I am proudly serving today under President Biden.  We made dramatic progress under President Trump, and also in Congress where there is strong bipartisan support that’s reflected including in the recent East Med bill introduced by Senator Menendez and Senator Rubio. I was on the phone with Congressman Bilirakis, a Republican leader in the House, Hellenic Caucus, just a few days ago. And we’ll be hearing from him later today.  He too emphasized the very strong Washington commitment to taking this relationship, continuing to leverage it and continuing to address our common interests.