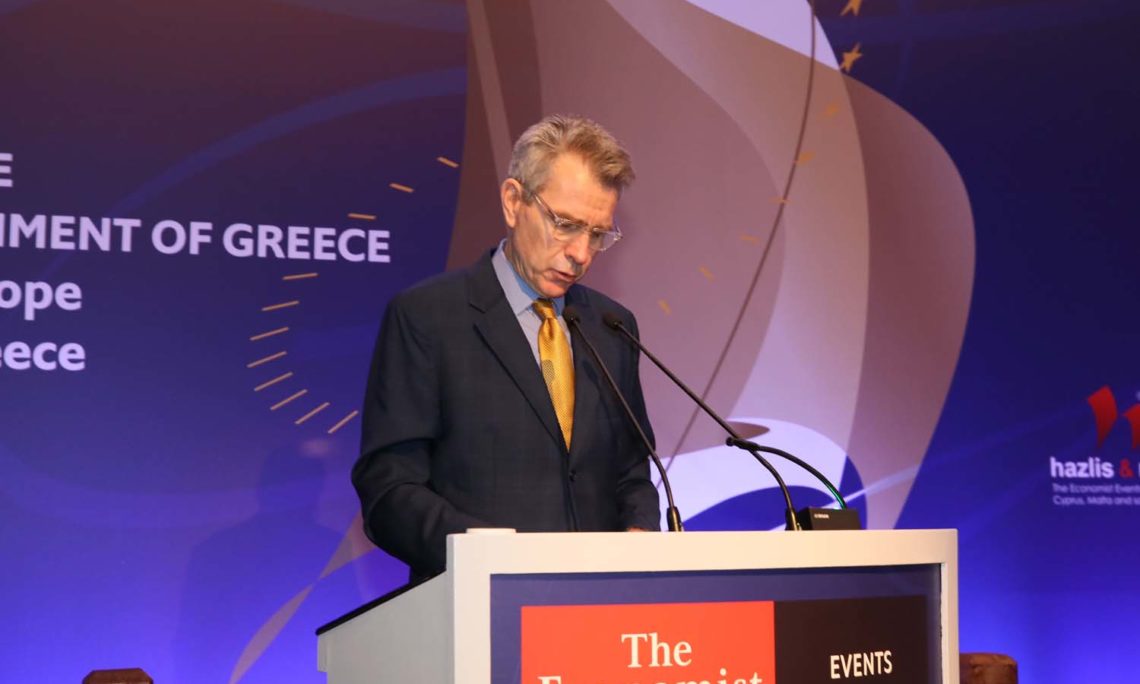 Καλημέρα. Thank you to The Economist for inviting me to speak and for the platform this conference provides to take a deeper look at Greece’s economy. Much of the discussion so far has focused on finance, and the challenges and opportunities around the end of the Greek bailout this summer, but I welcome this panel as a chance to focus on geopolitics, at a moment when strategic competition has reasserted itself in the Balkan, Black Sea and Eastern Mediterranean region, where I’ve served as Ambassador for the past five years.

Let me start with a few words about the U.S.-Greece alliance, as this is central to how both our countries look at the topics before this panel.
We see Greece as a key ally in a volatile region; a pillar of stability that we are investing in as part of the U.S. strategy to anchor the western alliance.

And that alliance remains a foundation stone of U.S. global engagement. It’s worth remembering that Secretary of State Pompeo’s first trip abroad was to the NATO Ministerial, sending a clear message of U.S. commitment to the alliance.

Our Assistant Secretary for Europe and Eurasia Wess Mitchell reiterated this point in a speech last week at the Heritage Foundation. He emphasized that, “There is nothing more precious to us as societies, more valuable to our long-term economic prosperity, or more necessary for our mutual defense, than the bonds of history, culture, commerce and security that exist between the United States and the countries of Europe.”

The United States has spent the last 70 years working with our European allies and friends to build peace, security, and prosperity on the foundation of a close and effective transatlantic partnership. Our relationship is rooted in enduring economic, political, and social ties – which together have ushered in a period of unprecedented peace.

The transatlantic market is one of the world’s largest and wealthiest – accounting for one third of global GDP and generating over $1 trillion in bilateral trade and $5.5 trillion in total commercial sales annually.

The transatlantic relationship and the era of peace it has established has led to unparalleled prosperity for our citizens – supporting 15 million jobs on both sides of the Atlantic. American companies are the largest source of employment in foreign-owned firms in Europe, while European companies are the largest source of jobs in foreign-owned businesses in the U.S.

So I would urge people not to be distracted by the headlines of the day. Despite any differences, over the past 70 years we have always remained in dialogue – and we will work through today’s challenges. The transatlantic relationship is larger and more important than any one of us, and the democratic values that bind us are more important today than ever before.

So what about Greece? Of course, every time I walk past the Athenian Agora I am reminded of the debt that our society – and our community of values — owes to Athenian democracy. And Greece, with its strategic location and strong commitment to spending at least 2% of GDP on defense has a key role to play in a U.S. strategy for Europe that seeks to stabilize the south eastern frontier.

Towards that end, NATO and the EU, over the past two years, have achieved an unprecedented level of cooperation and now are cooperating on maritime operations in the Central Mediterranean and the Aegean Sea.

Meanwhile, we are working to ensure that another NATO ally in the region, Turkey, retains a Western orientation.

As we work with Greece as a pillar of stability in the Eastern Mediterranean, we are also aware of the challenges faced by Cyprus and continue to work towards a bi-zonal, bi-communal federation.

Especially on Europe’s southern frontier, we collaborate closely to counter terrorist threats. The Greek government is a strong, reliable law enforcement partner, particularly in counterterrorism and border security, which enhances our collective security.

On migration, we have worked with Greece, as one of the frontier states most directly affected by the largest movement of people in recent history.

I’ve spoken many times in the past on the role that Greece has in bolstering the region’s energy security – Greece is poised to serve as an energy transit hub, including with the TAP Pipeline, IGB, and the Alexandroupoli FSRU, and the United States is eager to support that effort. And I was glad to hear Deputy Minister Kraleva saying the same thing.

The United States, in the realm of defense and security, continues to strengthen and deepen ties with Greece. Our shared naval and air facility in Souda Bay, Crete, is busier than ever, reflecting a high level of security operations across the Eastern Mediterranean. For instance, Greece recently hosted the USS Harry Truman Strike Group, with four ships in four ports across Greece: Souda Bay, Rhodes, Santorini, and Piraeus; and separately a visit by the USS New York to Corfu. These ship visits, as well as the recent deployment of MQ-9s to Larissa, are a reflection of the deepening defense relationship between our two countries, and manifest our shared commitment to maintaining stability in the wider region.

We also appreciate Greece’s efforts to deepen relationships with other key regional players, including Egypt and Israel. And just recently, Greece and Italy began NATO air patrols over Montenegro. Greece’s leadership in developing these regional relationships directly supports NATO’s goal of increasing and improving cooperation between NATO and the Mediterranean Dialogue countries. This is also a key priority of the United States as we seek ways to address shared security concerns. And I expect the partnership between NATO and its neighbors in the Middle East and North Africa will be a growing Alliance priority as Assistant Secretary General Alvargonzalez just alluded to.

NATO’s capacity-building expertise and the longstanding relationships that Greece enjoys with these southern partners can play an important role in combatting regional instability, weapons trafficking, terrorism, illegal migration, and the destabilizing behavior of malign actors. This approach helps with burden-sharing in international security: the more effective NATO’s southern neighbors are in combatting threats at home, the safer we all are. And the same applies to Greece’s enhanced engagement with its neighbors in the Western Balkans.

Greece’s role as a regional pillar of stability is one of the reasons why I’ve spent so much time and energy promoting this year’s Thessaloniki International Fair, where the U.S. will be the honored country. The Fair will provide a compelling platform to highlight Thessaloniki and northern Greece’s strategic role in building bridges with the Balkan countries, while also showcasing our close bilateral cooperation and Greece’s enormous potential as the economy emerges from economic crisis.

So, as you can see, there is an important role for Greece in our strategy for supporting a strong and prosperous Europe. I look forward to hearing from my fellow panelists and to the discussion that follows.