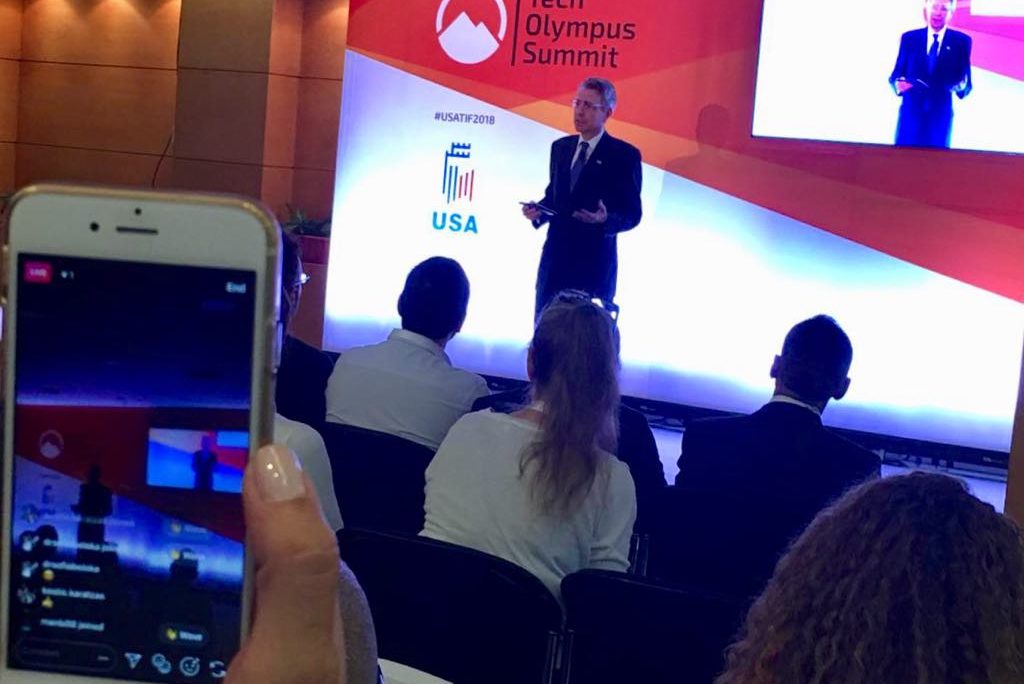 First of all, let me say it’s incredibly exciting for us as we kick off a whole week of programs associated with the United States’ role as the Honored Country at this year’s Thessaloniki International Fair.

I’m especially proud of what we’re doing with our partners and the Found.ation and TEDxAthens with this Tech.Olympus Summit. I’ve seen a lot of traveling around Greece and learned of great [untold] success stories of the Greek economy right now with the startup sector. I’ve seen it everywhere. I’ve seen it here in Thessaloniki, I’ve seen it in Athens, I’ve seen it in Patras, the city of Ioannina, and obviously, this is something very new in the Greek economy. But if you look at simple things like the numbers of registered startups and what’s happening, it’s no surprise to anybody who knows the knowledge-based economy in the United States. You see lots of Greeks who are successfully thriving in the U.S. startup sector. But what’s exciting now is you see people coming back to Greece, trying to build companies here, immigrate here.

This program is part of the embassy’s effort to support that, to share experiences. Our U.S. innovators and I’m delighted that we’ve got people from the U.S. today, and also to reinforce what’s happening organically. I’m very excited about the fact that we have such a strong presence of U.S. knowledge economy companies at the American Pavilion. I hope everybody will get a chance to spend some time with Google, Facebook, and Cisco and everybody else that we have over in the U.S. Pavilion.

And it’s not an accident that right across the street from the U.S. Pavilion is the Greek government’s Startup Pavilion. So clearly, there’s something new here.

I was asking one of our participants today, has anything like this ever happened at the Thessaloniki Fair? I was surprised, the answer was no. And what I can say is, on the part of the U.S. government we’re going to do everything that we can to sustain this and to reinforce it, to share experiences and build bridges with the knowledge-based economy in the United States.

In that regard, we’re especially pleased, we’ve got Michael Kratsios with us here today. Michael is part of Secretary of Commerce Ross’ delegation, the senior delegation from the United States for the opening weekend of TIF, but he’s here today to share some of his experiences with the knowledge economy, what the Trump administration is doing to support the most innovative and dynamic part of the U.S. economy today.

[Inaudible], first of all, a huge thank you to all of our partners — Dimitris, Filippos and Efi — and to say how much I look forward to seeing the results of these efforts, and to stay in touch with all of you in the weeks and months ahead as we continue to create, innovate and build the Greek economy of the future.