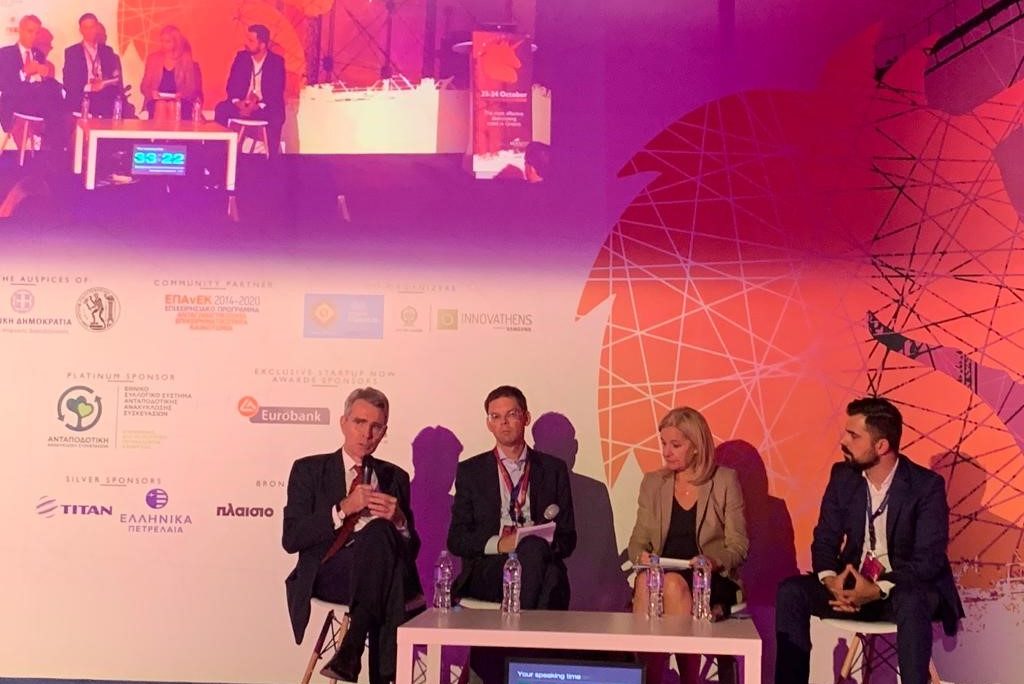 First of all, let me say what a pleasure it is to be here.  I always find it enormously encouraging to see how much is happening in the Greek startup space, and it’s a real pleasure for me to be here with my Dutch and Norwegian counterparts and to talk about a little bit about what we can do to help.

I’ve been focused on these issues since my first days in Greece.  When I arrived three years ago I made the point I come from California, the home of Silicon Valley.  My whole upbringing has been shaped by the transformation in the technology industry in the United States.  I’m a powerful believer in the transformative power of this sector.

I’m very proud of the work that the U.S. Embassy has done in this area, and I’ll talk a little bit about it in the next few minutes.  But I think what I would also emphasize is how impressive it has been for me to see over the past three years the really dramatic growth in this startup community in Greece, the way in which Greek entrepreneurs have been able to leverage some of the opportunities that the U.S. Embassy has created with mentors, with South by Southwest, our partnerships with The Hellenic Initiative, and also with the Ministry of Digital Policy.

I also want to note our new appreciation for the work that the Ministry, the Minister has personally been doing in this area.  I would say the same of the Ministry of Economy.  It’s been — it’s fantastic to see how quickly the new team in the Mitsotakis government is moving ahead to leverage these opportunities.

I was especially proud this year at the Thessaloniki International Fair, building on the experiment that we conducted in 2018 when the United States was Honored Country and I worked with Minister Pappas to have a startup pavilion across the street from the American pavilion at the Thessaloniki Fair.  Like the best angel investors we were able to walk away and see that idea prosper with a Greek government pavilion at the Thessaloniki Fair providing a platform for networking and collaboration among Greek startups.  It’s fantastic to see how much energy was in that room.  And I was very proud of the fact that we were able to act as tenants of the Ministry of Digital Policy pavilion in a small Agora where American speakers and some of our companies talked about what they’re doing.

I would be remiss if I didn’t emphasize how strongly committed the American private sector is to partnership with Greece in this area.  That’s why innovation and technology was the focus of the American pavilion at the Thessaloniki International Fair.  And all of our knowledge-based companies from Cisco, IBM, Microsoft, Facebook, Pfizer — they all were there, and I’ve left out a bunch of them.  What’s really encouraging to me is how those companies — Google and others — have built on the learnings that they took from the 2018 Thessaloniki Fair to further grow their presence here: the work that Google, for instance, has done on the growth of Greek tourism; the work that Microsoft has done on artificial intelligence and empowering Greek entrepreneurs; the decisions that a number of our major companies have made to increase their presence in Greece, specifically to leverage the human capital in the knowledge and technology sectors here.  So the flagship example is Pfizer, which I’m very proud of because it followed directly on the role that Pfizer had at the Thessaloniki Fair; Cisco’s new technology center in Thessaloniki; the soon to be inaugurated technology center at Dimokritos here in Athens.  So there’s a lot of this happening.

I think in many ways one of the challenges for this sector is to get the word out about how much is happening in Greece.  I visited Greek startups and Greek technology parks in Athens, in Thessaloniki, of course, but also in Patras and Ioannina.  I’m constantly impressed to see how much is happening in these areas.  And in cities that are not on the American technology map, but where you have very important innovative work being done, oftentimes in partnership with American companies in Boston or in Silicon Valley or someplace else.

The last two points I’ll make quickly, especially since Antoni is here.  I’m very proud of what we’ve done in the area of women in entrepreneurship, of our flagship project, which — I’m really proud to have been associated with over three years now — is Code Girls, launched in Kalamata.  My first Code Girls was in Trikala three years ago.  I was delighted last week to see my friend Mayor Papastergiou who told me that coding has now been incorporated into the primary school curriculum in Trikala, building on the Code Girls experience.  I’ve been to Code Girls in Ioannina.  My colleague, Cindy Harvey, our new public affairs officer was just up in Alexandroupolis for Code Girls.  Later this year we will launch Code Girls in Lamia which builds directly on my visit to Lamia earlier this year with now Mayor Bakoyannis and the team in central Greece.

So we’re going to continue to invest in this area as well because it’s one that shows great promise.  It builds bridges between Greece and the United States.  And by these bridges, it leverages that aspect of Greece’s human capital base.

The last point I’ll make to wind up — we’re obviously in a very busy and optimistic time in U.S.-Greece relations.  Since the elections in Greece I’ve hosted visits by two of our Cabinet officials: our Secretary of Commerce Wilbur Ross, equivalent to Minister Georgiadis, Minister of Development; and then my boss, our Secretary of State, Secretary Pompeo.

Secretary Pompeo’s visit and the Strategic Dialogue he conducted as part of that had a big focus on our collaboration in the areas of technology and entrepreneurship, so this is very much a part of the core U.S.-Greece agenda now.

I’m very glad that we have a prominent Greek-American, my friend and colleague Michael Kratsios, who came from Silicon Valley but is now at the White House as the head of the President’s Office of Science and Technology.  Michael has met with Minister Pierrakakis.  He met last week with an AmCham delegation.  He is strongly committed to reinforcing the efforts that we’re doing here at the embassy.

That’s just a quick sketch of some of the areas that we’re working together in, and I’m really hoping when we get to the dialogue, aside from good questions, you can also offer suggestions about where the program work we do at the embassy can be most helpful to you both in terms of developing your own innovative ideas and developing the startup ecosystem of Greece, but also in terms of deepening ties with your counterparts in America.