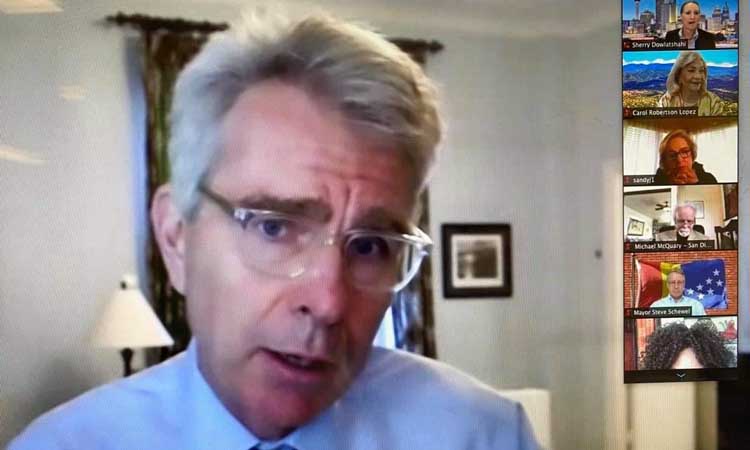 Thank you, Helene. Thanks for having me on. It’s really exciting to have so many elected local officials online today. I’m also especially glad that we’ve got a strong California contingent, including a couple of folks from Santa Barbara, which is really truly one of my favorite cities in the whole world and part of the United States and my home state. It reminds me an awful lot of the climate and everything else here in Athens, Greece.

You will also be glad to know we have a really strong California contingent here at the U.S. Embassy in Greece. Our Consul General In Thessaloniki is from San Francisco. And fortuitously, Thessaloniki’s sister city, or one of its sister cities in the U.S., is San Francisco. Liz Lee, our Consul General, had the opportunity to visit with Mayor London Breed when she was back at home last month and we’re very excited about the fact that we may get Mayor Breed to come to Thessaloniki later this year or next. And then I’m looking forward very much to hosting my friend and former colleague, Lieutenant Governor Eleni Kounalakis of California.

I am, as you described in that much too long biography, a career Foreign Service Officer, but I will say through my 32-plus years as an American diplomat, including eight years as American Ambassador, one of the things that I’ve learned over and over again is how important people-to-people relations are to shaping the environment in which we conduct our diplomacy. I’m a fantastic believer in the work of programs like Sister Cities that help to create bonds between our peoples and also help to humanize, put a human face on the official diplomatic work that I do.

I’m also a great believer in mayors, probably the most famous elected politician, at least the most famous Member of Congress in Greece today is Senator Bob Menendez of New Jersey. I will tell you every time I have Senator Menendez here in Greece and when he’s meeting with Greek politicians, he talks about how the most challenging job he had was actually getting his start as a mayor and how important that work is to how our democracy functions.

I think it’s also a terrific time to be having this conversation about citizen diplomacy as we all start thinking about the hopeful end of the pandemic. In the case of Greece, Greece came out of its hard lockdown at the end of May, and the Greek government has put a huge emphasis on attracting American tourists to come back to Greece for the summer. Our airlines have responded. We actually have nine direct flights from the United States to Greece now, and if I can remember them all – Atlanta; Washington, DC; Philadelphia; New York; Chicago – which is more than we’ve had in 30 or 40 years coming here. So that’s very exciting. And every time I’m traveling outside of Athens on the weekends I hear more American accents than I’ve heard in a long time.

My hometown, of course, is San Diego. I’m delighted we’ve got some San Diego city representatives online today. But I’m even more excited that since the last time we did one of these conversations. San Diego has signed up to a sister city relationship with the city of Chania in Crete. And I’m very excited about how that’s going to evolve.

Both are big Navy towns. We have a U.S. Navy base which is one of our most important facilities in the Mediterranean Sea in the city of Chania, and of course San Diego, especially when I was growing up there in the ‘60s and ‘70s, was all about the U.S. Navy. And every time I’m on board an American ship visiting us here in Greece I’ll find at least a couple of Navy officers who spent some of their favorite years in San Diego.

And you’ll be glad to know, Mayor Nirenberg, that when I’m trying to explain the island of Crete to visiting Americans, I basically say it’s the Texas of Greece because everything is just a little bit bigger and a little bit louder in Crete than it is in the rest of the country. I hope we might get you here at some point also.

Listening to Mayor Nirenberg’s characterization and description of how everything sort of stood still for a little bit when the pandemic first struck back in March of last year, I’m reminded that one of the last in real-life events that I did was actually a visit by the Mayor of Olympia, Washington, Cheryl Selby. Mayor Selby was here because she was trying to rekindle the sister city relationship between her Olympia and Olympia, Greece, which is where the Olympic flame begins.

I remember how Mayor Selby and her daughter were so excited that they were part of the Olympic torch relay that had started out in Olympia, Greece, and was on its way to Tokyo at a point when we all thought there was going to be a summer Olympics in 2020. So hopefully that story is going to finally complete itself in the weeks ahead, and I hope they’ve managed to keep the flame lit ever since Mayor Selby carried it here in Greece a year and a half ago.

I’m also really glad that we continue to see a further expansion of sister city relationships here. I’d love to do as much as we can in that area. These are great success stories for us. I was really glad to hear that Mayor Alahouzos of Tarpon Springs who I’ve gotten to know in this job, has concluded a sister city relationship with Mayor Koukoudakis on the island of Hydra. That’s especially timely this year because Greece is in 2021 celebrating the bicentennial of the Greek War of Independence which was 200 years ago.

I’ve really been struck as I’ve been in Greece through this bicentennial year how much it reminds me of my own childhood in 1976 with the American bicentennial. There are some very, very deep links between our two revolutions. The Greek revolution was very much inspired by the success of the American revolutionaries, and of course our founders – Jefferson and all the rest of them – were profoundly influenced by the experience of Athenian democracy, and they cited the experience of Athens’ democracy then 2,300 years prior, in laying out our own constitution.

This has been a tremendous opportunity for us to rekindle memories of those ties and the small group of American philhellenes from places like Philadelphia and Boston, New York, who traveled to Greece in the 1820s in order to support the Greek War of Independence because they saw it as both their intellectual duty but also the best way to reinforce our own young democracy.

And one of the real pivotal islands in that story of the Greek War of Independence was Hydra. It’s terrific that we’ve got this new relationship with Tarpon Springs happening in this bicentennial year. In fact, I was out on Hydra just a couple of weeks ago to join the mayor as he renamed one of the main streets in Hydra after two American philhellenes, William Washington, a nephew of our founding father, and George Jarvis, both of whom fought on Hydra in connection with the Greek War of Independence.

We’ve got a lot of good stuff going on but we’re definitely not finished. President Biden has spoken very strongly about his commitment to further deepen and improve U.S.-Greece relations and he’s typical of the many, many American political leaders who have been involved with Greece over the years. I expect many of you have Greek-American communities in your cities.

But I’m also very eager to work with, Helene, with your team of Sister Cities International, so that we can continue to identify other pairing opportunities. This is a time of great growth in the U.S.-Greece trade and business relationship. We have a lot of companies like Microsoft, Cisco, Pfizer, Amazon Web Services, Google that are growing their presence in Greece and growing their relationships here.

And I will say also, when I go out of Athens and I try to do that as often as possible, and whenever I’m out of Athens I meet with the local mayors. I’m really struck when I talk to them, so many of the problems that they express to me I’m guessing are very similar to what fills all of your inboxes every day — managing traffic, laying out digital services, dealing with problems like migration and homelessness. My favorite, how to regulate e-scooters, which has been a real challenge in some of the cities here in Greece. And especially in Athens and on some of the islands, the challenges over-tourism and how to manage and regulate and tap new platforms like Airbnb which are changing the way people travel, including the millions of Americans and Europeans who visit this country every summer for all that it offers.

I’ll finish up there and just say I look forward to the rest of the conversation this morning from all of you. I also hope you will feel that you have an open door here at the embassy and my team would be delighted to work either with Sister Cities or directly with any of you who are looking to identify strong partners here in Greece. I have a long list of mayors who have said to me I would love to find a sister city relationship in the United States. My experience on these things has been that that’s what makes them successful. They can’t be promulgated from here at the embassy. They really have to come bottom up. But I’m excited about the prospect of that. It’s very much something that I and my team here at the embassy are committed to support.

Thanks a lot. And again, Helen, I’ll look forward to seeing you in Santa Barbara hopefully at some point in the future, or even better, we’ll get you here to Athens and you can see how much it reminds you of home.