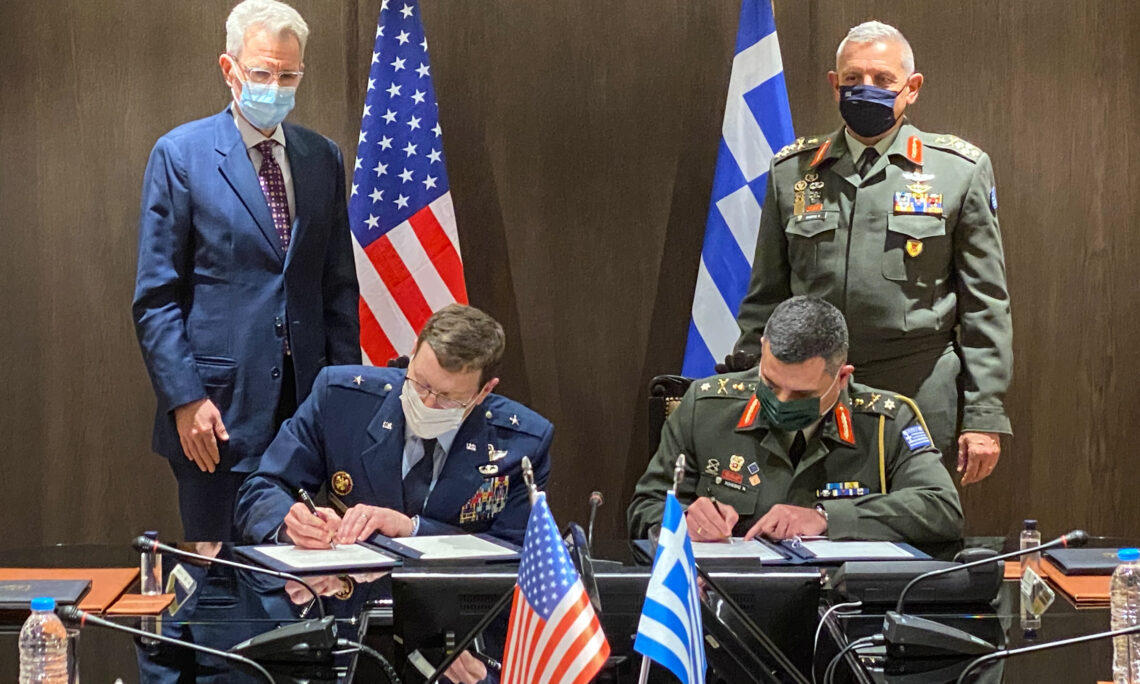 Thank you very much General Floros. Let me start by saying what a huge honor it is for me personally to be here today for this signing ceremony. I also want to say thank you to Brigadier General Gentile and all of our partners at European Command who have been indispensable to the deepening and strengthening of our bilateral defense relationship throughout the five years that I’ve been engaged in this effort.  I was reminding Mike just this morning that it was almost exactly five years ago that I did my first reception in Greece on board the USS Mount Whitney in Piraeus.  It’s quite remarkable to think about the distance that we’ve traveled since then.

I also want to say a huge thank you, with your presence sir, both to Captain Biery and to Colonel MacDonald, for all of the work that they and their teams have put into building this relationship and specifically concluding the negotiations on the expanded Mutual Defense Cooperation Agreement (MDCA) and this implementing agreement.  I count myself very fortunate to have such a strong U.S. military team at the embassy, and I know we all keep them very busy and I want to acknowledge both the sacrifices and the work that they’ve been engaged in, but also the significant progress.

As you said General, this implementing agreement really is a milestone in terms of the strengthening and deepening of our defense relationship.  I would emphasize two points.  One, the message that the United States underlined in Washington on the 14th of October when Foreign Minister Dendias led the team for our Strategic Dialogue, and the clear signal from the U.S. side that our defense relations are at a peak but not yet at the summit, that we will continue building and expanding those relations, and that this is recognized by the United States government, by President Biden’s Administration, as one of the real bright spots of a strong and comprehensive bilateral relationship.

I would also emphasize one thing that has become very clear to me over these years, which is the degree to which the deepening of this cooperation is not only good for us, it’s good for our bilateral defense relationship, it’s also good for NATO.  It helps to reinforce the credibility and the capability of our Alliance in a neighborhood that is not always friendly, and in a region where Greece has come to be seen by all as a true pillar of stability, a reliable NATO Ally, and a net provider of security, a country which is part of the solution to building the kind of democratic stable region that our citizens want and deserve.

Finally, I would affirm your characterization of today’s signing ceremony as a vote of confidence in that relationship.  I’m very proud of the confidence that this has engendered in the United States among Republicans and Democrats.  It’s significant that so much of the work that begun under the four years of the Trump Administration is now being accelerated by President Biden, with strong support from Republicans and Democrats in the United States.  And I hope very much that as Greek democracy engages in the final ratification of the updated MDCA that that same spirit of bipartisan democratic support will prevail.

General, thank you to you, thank you to all of your team who have worked with our team on this side of the table.  And I very much look forward to seeing the results in the weeks and months ahead of even greater cooperation.