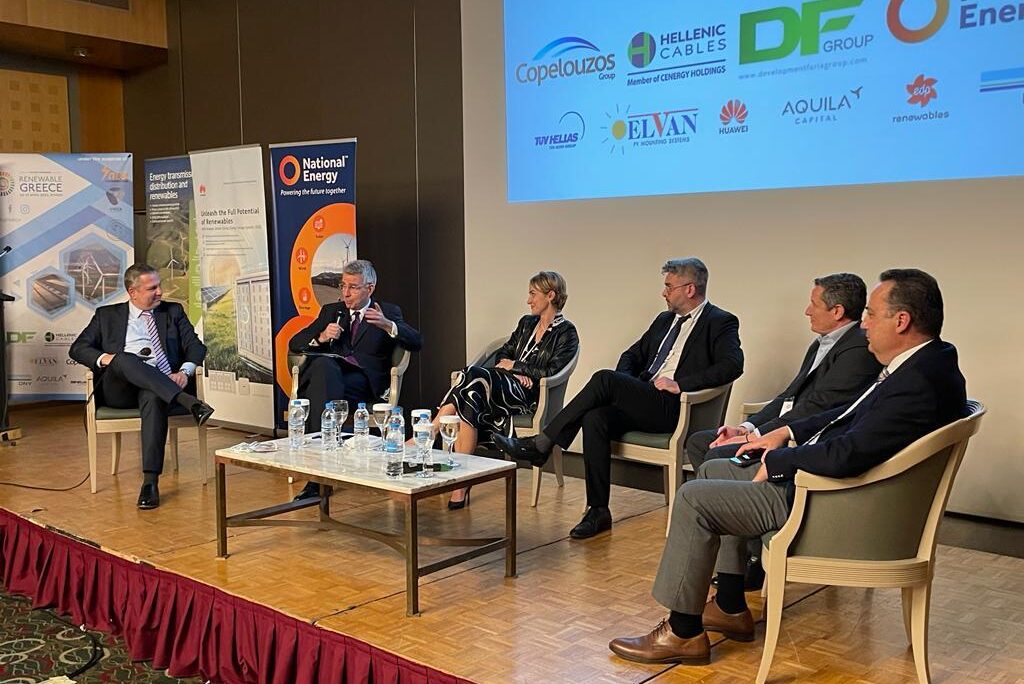 Question: You have been quite many years in Greece, and you might have learned that we consider our country one of the most beautiful and most important with the most fantastic spots, the center of the Earth in the energy ecosystem, in the tourism ecosystem, etc. So what is your perspective [and predictions] for the next decade [on energy and renewable energy in Greece]?

Ambassador Pyatt: Let me say what a pleasure it is to be here on this topic, especially with my friend and colleague, Alexandra. And if I had to make one prediction about the next decade, it would be that at some point, and I hope, that this will be the next Minister of Energy of Greece.

Obviously, as the American Ambassador, my number one wish as I look out a decade from now is that we continue to see further growth and deepening of the U.S.-Greece energy partnership. And, in particular, U.S. investment and U.S. technology in the Greek energy space.

A lot of that involves projects like you’ve been working on with 547 for the Vermio project. And I’ve said to Minister Skrekas that the only farewell gift I want when I leave Greece three weeks from now is the final license approval for Vermio, because that will be a game changer in terms of the recognition of Greece as a true European leader on these issues of climate, but also in terms of the evolving and improving investment atmosphere on these issues.

Right now, as Alexandra alluded to, of course, huge focus is on the immediate crisis in the European gas market. And, quite understandably, everybody is focused on the requirement to get more gas and non-Russian gas into European markets as quickly as possible.

We all can agree that what families pay for their utilities, or what it costs to put petrol in your automobile, should not hinge on the actions of one man who chose to invade and brutalize another country. And we are working very closely together, as the United States and the European Union, to advance our shared interests in that area.

At the same time, we have to continue to accelerate the energy transition. I do not see these as contradictory goals. In fact, one of the many ways in which President Putin’s action in Ukraine is going to disadvantage Russia is that it’s going to incentivize Europe to move even faster on energy transition. And the United States strongly supports that.

Greece is already an emerging leader on energy transition and renewables. Just in my five and a half, six years here, you’ve seen steady growth in Greece’s position relative to others in the European Union in terms of the percentages provided by renewable energy.

And the Prime Minister made the point last week at Delphi, that there were a few days the week before where Greece was actually producing a surplus of renewable electricity because the weather was favorable. Winds were high, the skies were clear, but that, of course, is not always the case. So building these robust energy networks is important.

I’m also very interested and hope very much that we will continue to see over the next decade, continued growth in the role of American technology companies in this space on issues like smart grids, smart cities. I was actually up in Thessaloniki earlier this week with Cisco and the mayors of Thessaloniki, Athens, Trikala, and cities all over southeastern Europe that are focused on precisely this issue, how to use energy more efficiently through smart technology.

And I I’m a big fan of the eco-islands initiative. And I know that a number of our big tech-companies are very interested as well in the idea of using some of the Greek islands as testbed for these connected grid and smart grid ideas.

Another issue that we all want to keep focusing on is how to accelerate the renewable energy transition. And in this regard, I really want to congratulate Secretary General Sdoukou and the whole team at the Ministry of Energy for what you have done to make the Greek system work more efficiently.

We face a lot of the same issues in the United States. I’m from California. I was actually with a congressman from Santa Barbara yesterday, which is one of the most beautiful parts of my home state, but it’s also a place where you have the same issues in terms of regulatory approval, coastal commission, how to find the right balance on these issues in the context of a democracy.

I’m optimistic that this transition is going to accelerate in Greece in part because of the Prime Minister’s wise decision to prioritize renewable energy as part of your ERF project. And I think that’s a real wise approach.

I’m also very excited about some of these frontier technologies. The one everybody talks about, of course, is hydrogen. I’m very interested in the White Dragon project and seeing how that’s going to unfold in Greece with the principal role that is being played, among others, by a Greek American company Advent Energy, based in Boston and in Patras, and how they’re working with big fossil fuel companies in Greece to accelerate that transition.

We see Greece as a really important hub for energy across southeastern Europe. Both the rule that has already carved out on gas, with IGB, the Revithousa terminal, the FSRU in Alexandroupoli, the IGB interconnector, but also everything that can be done in the electricity space.

One of my legacies in this job that I’m very proud of is the 3+1 process between Greece, Israel, Cyprus and the United States. And the United States will be hosting in the next couple of weeks before, my departure, another renewable energy working group under that umbrella. And we’re going to continue to invest in that space as well.

Finally, I would highlight the importance of the investment bonds that are emerging. I know this conference is sponsored, among others, by Hellenic Cables. I had the opportunity, just a couple of weeks ago, to visit the Hellenic Cables manufacturing facility in Corinthos. That facility is among, other things, providing the cable for the first offshore wind park in the United States off the coast of Virginia.

And even more important, Hellenic Cables is investing $350 million in the United States to create a new cable manufacturing facility in the state of Maryland that we’ll be aiming to take advantage of what we think will be a huge boom in offshore wind in the United States. So this illustrates the kind of synergy that can emerge there. There are lots of other companies that are doing the same. We’ve been very supportive of the renewed engagement here in Greece from American companies like GE Wind, Blink, Tesla and, of course, 547.

And we will continue to see expansion in this area, building on the unique role that Greece can play as a market that’s manageable in size, but allows American companies to accommodate their technology and their approach to European regulatory structures. So I’m very optimistic about this as well.

And lastly, I would just say I hope very much, as I hand off the reins on this basket of issues, that we will continue to see energy being one of the real bright spots of the U.S.-Greece relationship overall. This is an issue where Greece is on the map in the United States. It is one of the pillars of our Strategic Dialogue chaired by Secretary of State Blinken and Foreign Minister Dendias. And it’s an area where there’s great enthusiasm for continuing to invest and build our ties.

Question: Mr. Ambassador, I would like to focus a little bit on the bureaucracy of Greece, let’s put it this way. You know that our country is struggling, although we have ambition and we have huge targets. We have good companies, we have very capable people focusing on developing projects. We see that we are struggling to produce the necessary amount of licenses and approvals. And foreign companies are also struggling and projects are delaying, etc. After all these years in Greece, what would be your best advice on how to overcome these problems and find solutions?

Ambassador Pyatt: The fact that the Secretary General herself raised this issue in her comments and talked about how they are committed to moving faster on these issues shows that everybody knows what needs to be done.

And, of course, these are issues that all of our democracies grapple with. We have the same issues in the United States. My home state of California, to talk about it a little bit more. California would be the fifth largest economy in the world if we were an independent country. Our Lieutenant Governor, my Lieutenant Governor, so the number two elected official in the state, is Eleni Kounalakis, a dear friend who is also the most senior Greek-American politician in the United States today.

California has done extraordinarily well in tackling the two requirements. One is to have very bold goals. And Prime Minister Mitsotakis, as I talked about earlier, has already satisfied that requirement. But California is really pushing the envelope in terms of electric vehicle adaptation, off-grid solar storage, smart grids, incentivizing enormous new investments in wind and solar.

But one of the things that California has also done, for instance, is to automate the vocal approval of solar projects. I know the Greek government, Prime Minister Mitsotakis’s government, has an outstanding record in terms of digital governance and using the tools that the Ministry of Digital Policy has set up to make government more streamlined, more accountable, and more responsive to its citizens. And this is an area that cries out for that sort of thing. And I actually don’t know what the Ministry has done in terms of trying to adopt these automated, bot-based kinds of applications to process and adjudicate licenses. The other thing that these applications do, of course, is it removes the incentive for bureaucratic delay.

But that’s critically the number one issue that I hear about from American investors who are looking at this sector, how quickly can they move? And I know that the government, as reflected in the Secretary General’s remarks, is well focused on this, and I expect to see continued progress.