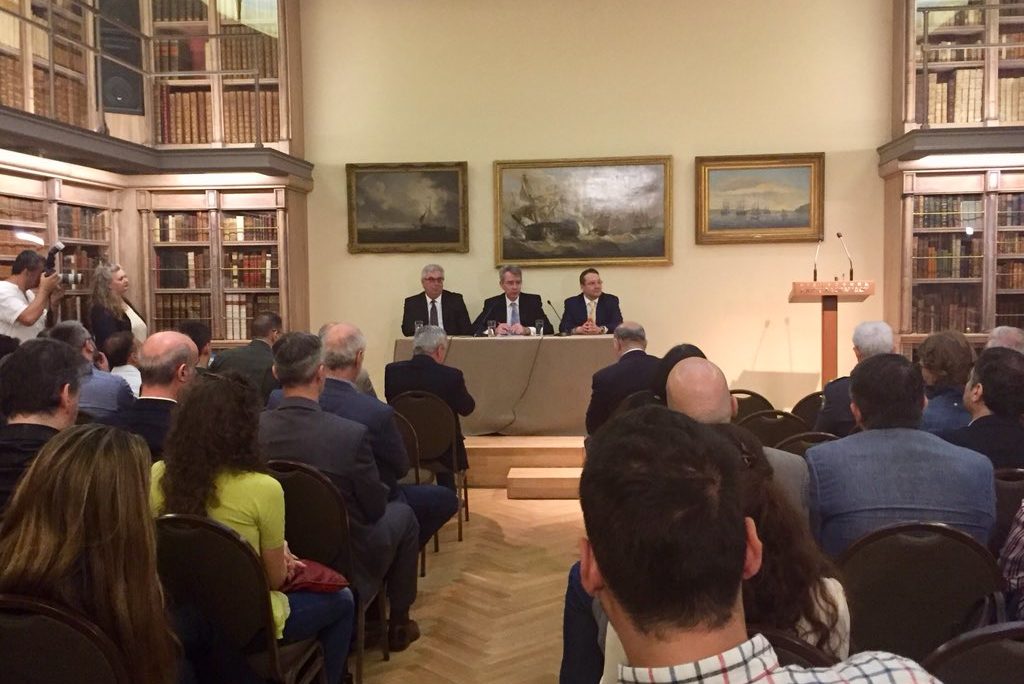 Good evening, everyone. Thank you General Stefanis, Ambassador Paraskevopoulos and Former Minister Maniatis for honoring me with your presence here this evening. I want to say a special thank you to Rector Kotios, and the Dean of the School of Economics, Business and International Studies Professor Sfakianakis for inviting me to speak today.

I would also like to express my special thanks to our friend Prof. Aristotle Tziampiris – Aris is a prominent academic, distinguished scholar, a notorious New York Yankees fan, and a close friend to me, to the U.S. Mission in Greece and to the U.S. in general. Thank you Aris, for your ongoing collaboration and support!

You all have built a phenomenal educational institution. The University of Piraeus is one of the oldest, largest and most distinguished Greek universities, and its Department of International and European Studies is properly recognized as one of the leading departments of International Relations in Greece.

In particular, I believe the University has shown tremendous foresight in creating its Master’s in Energy program. So my hat goes off to Professor Farantouris and Aris for pressing ahead in creating and sustaining this innovative program that places the University of Piraeus at the forefront of this sector which is so critically important for European security in the decades ahead.

I am particularly proud that our U.S. Embassy enjoys such an excellent relationship with Piraeus University and collaborates with its faculty members on a range of significant programming. And given how often you host distinguished academics, decision-makers and prominent experts from Greece and abroad, I am deeply honored by your invitation to be the inaugural speaker at the inaugural Prometheus Annual Energy Lecture. My only condition is that I get invited to speak at Paros Summer School.

Actually, this idea was planted back in January when I was speaking to some students from Piraeus University. And I’ve been looking forward to being here with you all – the current and future leaders of the Greek energy sector, and being back here at this fantastic Laskaridis Foundation library, so thank you Mr. Mazarakis for having us here this evening.

On the topic of discussion tonight, I recently participated in a panel on energy issues at the Hellenic Association for Energy Economics forum including several of my fellow Ambassadors from EU countries. I was struck then how our respective visions on key issues for European energy security converged, and how we all emphasized the importance of Greece’s role as a regional energy hub, and our respective strategies to enhance investment in this sector.

First and foremost, we all want to establish a steady, uninterruptible supply of energy to Europe and the wider region as the foundation for economic growth and a basic pre-requisite for political and economic stability.
We agreed that ensuring diversification in energy supply provides the surest path to this goal, and therefore we must all support the various energy infrastructure projects the Greek government has advocated, leading with the TAP pipeline.

The Trans-Adriatic Pipeline, through Greece and Albania to Italy, will allow Azeri gas to flow directly into the European market reducing the EU’s reliance on Russian gas. The support which Greece has shown for TAP, which is now 95% cleared and 75% of the pipeline is in the ground through Greece and Albania, further illustrates Athens’ commitment, not just to its own energy security, but that of Greece’s neighbors.

The Greece-Bulgaria Interconnector, which the United States also supports, would allow TAP gas to reach not only the countries on the pipeline’s route but also countries further north in the Balkans, bolstering regional energy security.

The expansion of the Revithoussa LNG terminal provides Greece already with flexibility for importing natural gas from multiple sources – including the eastern Mediterranean – into Europe. A future floating storage and regasification terminal near Alexandroupoli would enhance that resilience. We believe it should be a high priority in the next few months to complete financing and participation for the FSRU, which hopefully will include an American share.

And this brings me to another clear point of consensus between me and my colleague EU Ambassadors, namely the transformative impact that LNG imports, including from the United States, will have in deeper diversification of Greece’s and Europe’s energy supply. The arrival of the first U.S. LNG exports to Lithuania not long ago signified the tectonic shift that is occurring in the natural gas markets as U.S. LNG begins to come online. And that is just the start of the changes to come as America emerges as a significant energy exporter.

And so Prime Minister Tsipras’ announcement in Washington last October that Greece intends to join several other EU States in importing U.S. LNG is a very significant development.

While we are keen to see American exporters succeed in finding new markets for LNG, the real winners will be the consumers, as the European gas market begins to experience true competition. That is the reason why the EU has welcomed additional LNG exports from the United States.

I should also note here that the Baltic States and several Central European countries are developing their own regasification terminals and interconnections that are further transforming European energy markets, so Greece’s actions are not isolated.

All of these Greek energy infrastructure projects are massive in scale, with TAP constituting by many measures the largest foreign investment in Greece since the crisis began. Having visited TAP’s construction site, I saw firsthand how the project has the potential to reshape the energy landscape of Southeastern Europe. But the Southern Gas Corridor is not the only “transformation project” in this neighborhood. There are others in various stages of development. The Prime Minister Tsipras recently visited Cyprus, to meet with his Israeli and Cypriot counterparts and discuss the future of energy in the Eastern Mediterranean, including the East Med pipeline project, which is another step toward establishing Greece as a regional energy hub.

I’ve often said, but it bears repeating, that the United States views Greece as a pillar of stability in the region. As such, the U.S. and Greece share a compelling interest in supporting these energy infrastructure projects. We must ensure that no country from outside Europe’s Energy Union has the ability to manipulate its resources or leverage its position in the global energy market to extort other nations.

In this context, the United States views the development of pipelines like Nord Stream 2 and the multiline TurkStream as unwise, as they would only increase market dominance from a single supplier to Europe. If completed, these projects would bypass Ukraine as a transit country, heighten the vulnerability of Poland and the Balkans, and deepen European dependence on the Russian gas monopoly. None of these outcomes is desirable.

These large pipeline projects would give Russia new leverage to force Europe to accept political demands in exchange for supplying a basic human need, stable access to energy supplies. We have seen a growing recognition in the capitals of Europe, including in Berlin, that Nordstream II is a political project. The U.S. will continue to encourage the EU in this context to abide by its own commitments to diversification under instruments like the third energy package.

Of course, there is no expectation that U.S. LNG or other sources of gas will entirely supplant Russian gas, which will continue to supply a significant percentage of European energy demand. However, it must do so in a competitive market. And more importantly, European countries must no longer face the specter of Russia “turning off the spigot” for political purposes.

As President Trump made clear when he visited Poland last year, “The United States will never use energy to coerce your nations, and we cannot allow others to do so.”

Instead of using energy supplies to coerce, American companies have been working in cooperation with European firms to unlock potential in this sector – both upstream and downstream, as well as in renewables. We’ve seen how Energean, a Greek company, partnered with a U.S. investment firm to upgrade its operations and expand production in the Prinos basin and beyond. Energean has now also developed its operations outside Greece and is playing a significant role in the development of the eastern Mediterranean’s upstream energy potential.

U.S. investors are also looking at opportunities in energy privatization, including at Hellenic Petroleum. ExxonMobil has expressed its interest in partnership with Total and Hellenic to explore production possibilities in Greek waters. Also, General Electric has expressed its confidence in the wind market, which it sees expanding not only in Greece, but throughout Europe.

Other energy projects also have the potential to bring in billions of dollars in foreign direct investment and create thousands of jobs in Greece. Not to mention the benefit they would bring by further building Greece’s central position in the regional energy market.

We also look forward to the privatization of DESFA, which the SNAM-led consortium just won, which will lead to further investment in the Greek system and create new opportunities for diversifying and strengthening resilience.

Energy is a sector that allows Greek companies to expand worldwide, including to the U.S. For example, Greece has been a leader in building its renewable energy sources, creating expertise that has allowed Greek companies to succeed around the world, including in the United States, where Greek company TERNA has successfully built wind farms. GE has also collaborated with Mytilineos on the construction of a major power plant in Libya.
So in closing, before we get to questions, I would say that the friendship between Greece and United States has never been stronger, and energy issues – and energy diplomacy – has never loomed as large in its relationship as it does today. The United States will continue to partner with Greece, with the European Commission, and all of our European Allies and partners to advance European energy security, which benefits our shared security and prosperity.

Thank you all for joining me tonight and thank you Aris, and the University of Piraeus for the great hospitality and the honor of kicking off your lecture series. And warmest congratulations on your foresight in launching the Prometheus Energy Lecture. See you next time. Thank you.