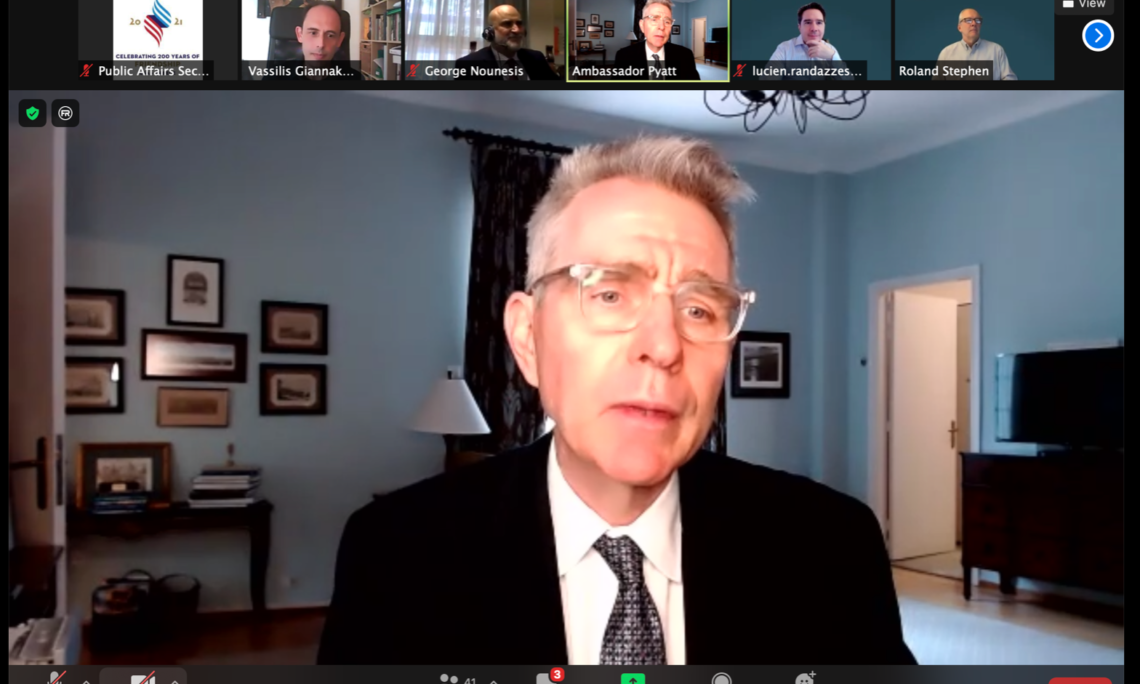 Thank you, Vassilis, and thank you so much for giving me the opportunity to join the launch of this Embassy-supported project.  And I really want to congratulate you and all of your colleagues at SciFi for organizing this program, keeping it on track through the pandemic and then moving it from real life to the virtual platform and all your work jointly with our partners at Demokritos here in Athens, and at FORTH in Heraklion, both of which I’ve visited.

I also want to say a huge thanks to the team from SRI, Roland and Lucien for getting up really early and for being part of this exercise over the next few days.  I want to share with you also, I’ve had multiple conversations with Greece’s fantastic Minister of Digital Governance, Kyriakos Pierrakakis, who I know at the very top of his travel list has a trip out to the Bay Area and Stanford, so we will continue to be focused on building these academic and also policy and business bridges.

And I want to say, George, also, thank you for your really well-put remarks.  It’s great to see you and Sofia.  It’s been too long since I’ve been out at Demokritos, and I really want to applaud everything that you’ve been doing to help build this innovation and entrepreneurship ecosystem here in Greece.

I love the fact, Vassilis, that you’ve named this project after Prometheus.  You described the mythology, but I think the other aspect that’s important to me is that of course, the fire that Prometheus delivered was really the first technology, so it played an essential role in sparking human civilization, and so from that standpoint, it’s a good reminder to us at the “discovery of fire” moment that I think Greece has arrived at.  I’m very confident that the digital revolution that we’re starting to see in Greece, in government and academia, is going to have a similarly wide-reaching effect on how the Greek economy is organized.

This is a sector that I’ve been really proud to focus on through nearly five years here as the American ambassador.  It’s one that I grew up around.  I know George knows this, but my alma mater, University of California, has really led the way in building these kind of lab-to-market partnerships.  And my part of California, San Diego, was really one of the hotspots, even as I was growing up as a child half a century ago, in terms of this kind of innovation.

I’m absolutely convinced that as Greece emerges from the economic crisis, that one of its great competitive advantages is going to be its human capital, its skilled workforce.  We see American companies responding to that — the kind of investments that you’re seeing from top-tier American firms like Pfizer, Cisco, Deloitte, Microsoft, Digital Realty, AWS.  They’re all coming to Greece because of the human talents that they see here.  And they’re bringing to Greece their knowledge of the markets, their technologies, their desire to work with Greece, see the Greek market grow, and create opportunities for both our societies.

The laboratory-academia connection plays a key role in this.  George, I know you’ll remember our former State Department Science and Technology Adviser, Dr. Mung Chiang, who visited Demokritos last November, and how impressed he was to see and meet the researchers out there and the entrepreneurs, including American technology companies like Tesla and EY, that are helping to grow this space in Greece.

So we’re going to continue at the Embassy to plant our flag on these issues.  I will continue to talk up the story of the Greek innovation ecosystem and encourage American companies to look for opportunities here and to build the kind of partnerships that create prosperity on both sides of the Atlantic.

We’re very proud that this project is happening under the umbrella of our Greek bicentennial campaign, “USA & Greece: Celebrating 200 Years of Friendship,” which is intended as our contribution to honoring the Greek bicentennial, but also a way to highlight and reaffirm the people-to-people ties that are so important to this relationship.  So we’re going to continue to have programs in the science and technology area: support to the Athens Science Festival, support to The Hellenic Initiative in the entrepreneurial space.

So we’re very excited about all of this.  I love how you’ve framed the project.  I’m very excited to see the results.  And I want to assure everybody here that technology and innovation are going to continue to be a featured aspect of the work that we do at the Embassy.  So, thank you Vassilis, and good luck with the discussions.