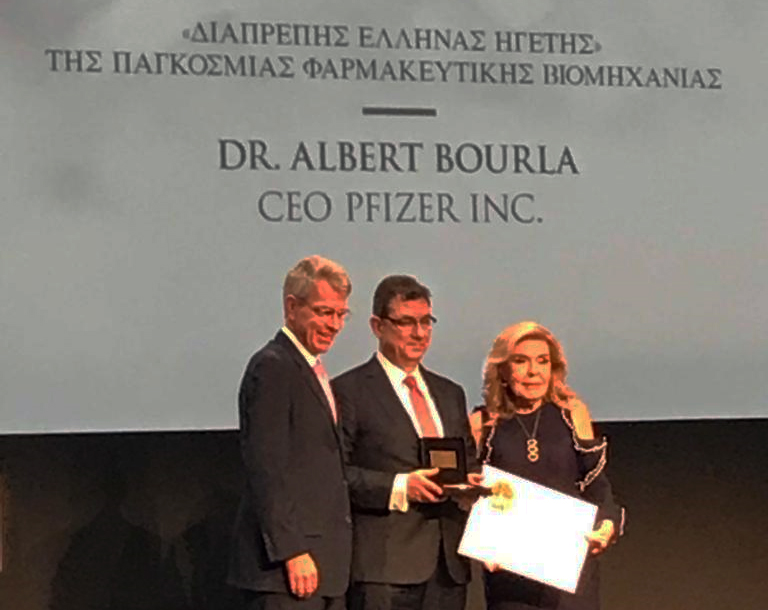 Καλησπέρα σας! Thank you Jenny, for inviting me to present this award with Mrs. Vardinoyiannis.

It’s a great honor to attend another Prix Galien, an event which celebrates both millennia of Greek contributions as well as these modern pioneers of the pharmaceutical industry, who represent the tremendous strength of Greece’s human capital.

In this regard, I’m especially pleased to see your recognition of Andreas Drakopoulos and the team of Stavros Niarchos Foundation, a good partner of the U.S. Embassy, who has done so much to help Greece but also to build bridges between our two countries

Their focus tonight here is the Global CEO of Pfizer, Dr. Albert Bourla somebody who embodies the cooperation I’ve tried to encourage between the U.S. and Greece in this industry. A son of Salonika, educated at Aristotle University, Dr. Bourla has over 25 years of experience with the company and previously served as Chief Operating Officer. When I first met him at Pfizer headquarters in Manhattan on one of my trips to recruit participation for the Thessaloniki International Fair, Dr. Bourla impressed me as someone smart, focused and humane. He also struck me with his deep commitment to his family roots here in Greece.  Pfizer of course became a flagship exhibitor in the American pavilion at TIF, reflecting the important role that the company has played in Greece for almost 60 years and our focus at TIF at the best of American technology and innovation.

Pfizer employs over 300 people and contributes 137 million euros per year to the Greek economy. And each year, 4 million units of Pfizer products are produced locally with Greek partners.

Pfizer’s respect and care for its employees has also earned the company recognition as Best Workplace in Greece for three years.Pfizer stood with Greece during the difficult years of the crisis by donating 1 million euros in medicine to partially cover the unmet pharmaceutical needs of uninsured patients, 2,000 doses of vaccines to support the immunization of people on the islands and in Northern Greece, and a mix of 8,300 medicines to meet refugees’ needs.

Dr. Bourla, too, has the human touch that I’ve seen among so many Greeks I’ve met during my time here.

He introduced the “Patient First” approach for Pfizer globally, and his focus on patients complements the company’s dedication to Greece and the country’s economic recovery.

His leadership embodies the real and enduring ties between our two nations.

And so it is my great honor to be part of this presentation to Dr. Albert Bourla with the award for “Preeminent Greek Leader” of the global pharmaceutical industry.

So Albert συγχαρητήρια and I know you will forgive me as I depart early this evening as I rush to catch a flight for a program in your beloved Thessaloniki.
Συγχαρητήρια…