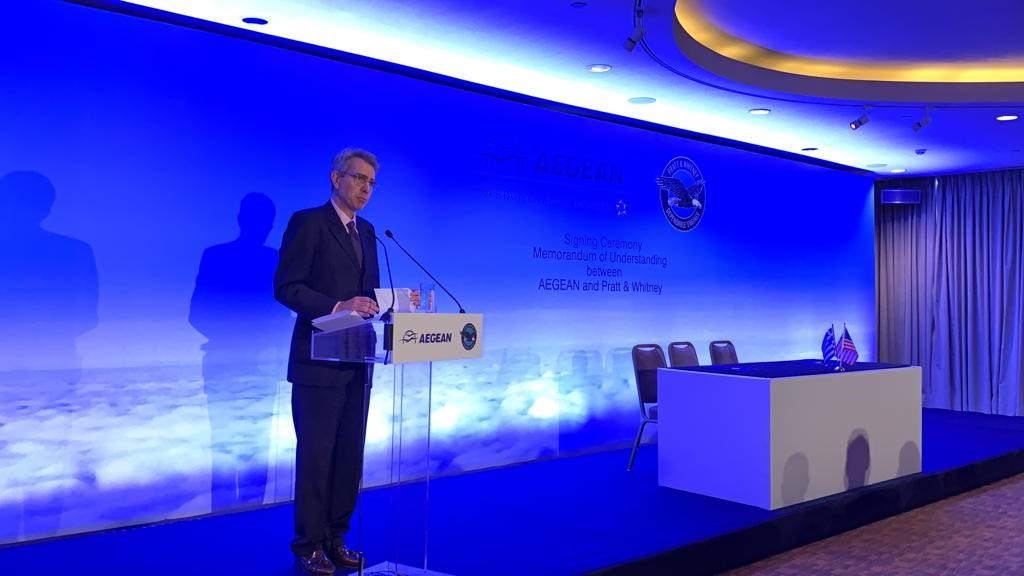 Καλησπέρα σας. Eftychios, Dimitri, Rick, it is a real pleasure for me to join you here today in celebrating this agreement between two outstanding companies – Aegean Airlines and Pratt & Whitney. This is a strategic agreement that grows the U.S.-Greece commercial relationship and provides a great example of what we highlighted in September at the Thessaloniki International Fair, namely U.S.-Greece cooperation on advanced technology and innovative solutions. This topic will also be an important part of the discussions next week in Washington, D.C. as we launch the first ever U.S.-Greece Strategic Dialogue.

During my years as American Ambassador in Greece, I’ve logged a lot of distance on Aegean Airlines, and I’ve come to take for granted both their tremendous on-time record, which I really appreciate, but also the exceptional service of the crews, and it is no surprise that Aegean – a Star Alliance partner of United Airlines – was honored for the 9th time again this year with the Skytrax World Airline Award as the Best European Regional Airline.

As Greece emerges from its economic crisis, Aegean continues to play a vitally important role in facilitating new business and tourism growth, which will ultimately help Greece to get back on its feet.

As part of the U.S. support for Greece’s economic recovery and Greece’s ability to attract foreign investment, I always point to America’s competitive edge in transparency and high technology, and this agreement is a great illustration of that.

Aircraft require large capital investments, and factors such as downtime for service and expenditures on fuel can be the difference between an airline being profitable or not. So, choosing the right engine is the biggest decision an airline has to make after deciding on a new aircraft.

Aegean has shown great confidence in the American company Pratt & Whitney, which is based in Connecticut, and its parent company United Technologies. It’s powered its fleet for many years, as Eftychios pointed out, and the 49 Aegean Airlines Airbus already have Pratt & Whitney engines.

The new aircraft that Aegean has ordered will have much more fuel efficient and technically advanced Pratt & Whitney GTF engines, exactly the kind of American innovation that we celebrated at our TIF pavilion this year.

And I also want to thank both Aegean and Pratt & Whitney for their tributes to the former President Bush, somebody who devoted so much to the construction of our transatlantic relationship today.

And with that, I will put the spotlight back on Aegean and on Pratt-Whitney for this major transaction, which pairs industry leaders in the United States and Greece that can help move both of our countries forward. Thank you very much for letting me be part of your event, and I wish you both the very best of success. Ευχαριστώ πολύ.