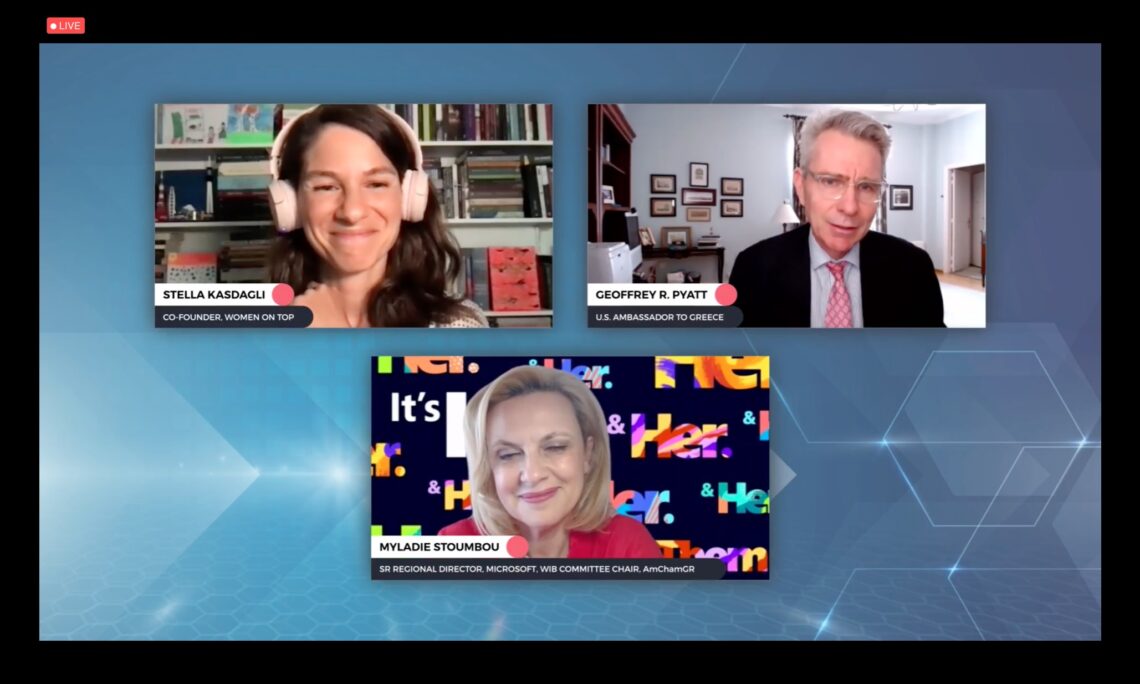 Thank you so much, Stella.  It’s great to see you, great to see Myladie.  Let me also say huge thanks to all of our partners at Women on Top and at AmCham for putting this together.  You did a great job, Stella, in your opening of describing what the POWER initiative is all about.  But I would also emphasize the fantastic synergy between what you have been doing, what AmCham has been doing in terms of trying to advance our shared agenda of women’s economic and entrepreneurial empowerment, but also the transformation that’s underway in Greece right now.

When President Biden spoke to Prime Minister Mitsotakis a couple of months ago, one of his messages was to underline the U.S. commitment to partner with Greece as we all work together to recover from the pandemic and begin the process of sustainable economic recovery.  If there’s one silver lining from this very difficult year and a half that we’ve all lived through, it’s the fantastic growth that we’ve seen in the Greek digital economy.

We’ve seen a leading role by American companies Microsoft, Cisco, Pfizer, Applied Materials, and many others who have doubled down on their investments and their commitments here in Greece, recognizing the fantastic human capital, but also acknowledging the significant progress that Prime Minister Mitsotakis’sgovernment has made even during this pandemic period on issues like digital governance, distance education, deploying technology to help Greek democracy work better and smarter.  It’s something that I know American businesses and investors have taken notice of.  And you see it also in the continued growth of this Greek entrepreneurial sector, which is something that I’ve been working on, really from my very first days here in Greece five years ago, but where we’re now really entering the take-off phase.  And I am committed, the U.S. Embassy and the U.S. government are committed to ensuring that the women entrepreneurship story is an important part of this take-off phase.

I was up in Thessaloniki and in Patras about two weeks ago, and had the opportunity to meet and visit with several technology companies at that time, including Pfizer at their impressive new campus in Thessaloniki and also Advent Technologies in Patras and SoftoMotive, which was recently acquired.  And I was really encouraged at both Advent and at Pfizer to see the number of women in senior leadership roles as both technologists and also as senior managers as these two American companies are scaling up their investment in the Greek tech sector.

This POWER initiative and the forum over the next two days is about reinforcing those networks, about sharing best practices—and I really want to thank all of the American women tech entrepreneurs and experts who are joining us over the next two days to be part of this and to share their experiences—but also, reinforcing networks here in Greece.  One of the things that I’ve found the Embassy is able to do well is to create a space either physically or digitally, as we’re doing in this case, for Greek entrepreneurs, for Greek women technology folks to get together to share experiences, to recognize each other’s talents, and to identify a policy agenda.  Because it’s clear that this is an area where we can’t just sit on our laurels, where invention continues every day.  And I’m committed to seeing that the technology space remains one where the United States is Greece’s leading partner, and where American companies continue to play a forward-leaning role in helping to bring best practices, innovative structures and technologies, and the capital that is part of growing our technology relationship.

So the goal of this initiative, as I see it, is to help increase the number of women tech entrepreneurs in Greece, including those who have access to U.S. venture capital and the U.S. market; and second, to strengthen those connections.  I see those connections every time I visit an American technology company in Greece, and again, I was just with Advent in Patras.  You find a Greek American story which goes back to somebody’s educational experience or a visiting professorship, but now it’s begun to acquire a momentum of its own, and that’s very exciting and very encouraging to me.

We’re going to keep working in this area, from the lowest level up to the highest.  My colleague Cindy Harvey will be in Ioannina in just a couple of days for another round of our Code Girls program, which is aimed at encouraging young Greek women to become interested in areas of science, technology, and mathematics.  We’re going to keep working on women’s political empowerment with our partners at Women Act.  We’re working on women in tourism with MeXoXo.  And Women on Top is going to remain a key partner for us.

We’re going to keep focusing on these areas.  I’m excited about the fact that we’re going back to the Thessaloniki International Fair in September to launch our TechCamp in Thessaloniki in real life with our partners from Social Innovation, with a particular focus this year on women startuppers.

I want to close by first of all thanking our partners at AmCham and Women on Top, underlining how proud I am of the work that the American Embassy has done in this area, and saying how eager I am to see the results of your conversations over the next two days, but also where you all continue to grow the Greek economy in the months and years ahead.  Thank you very much, and I hope you have a terrific discussion.