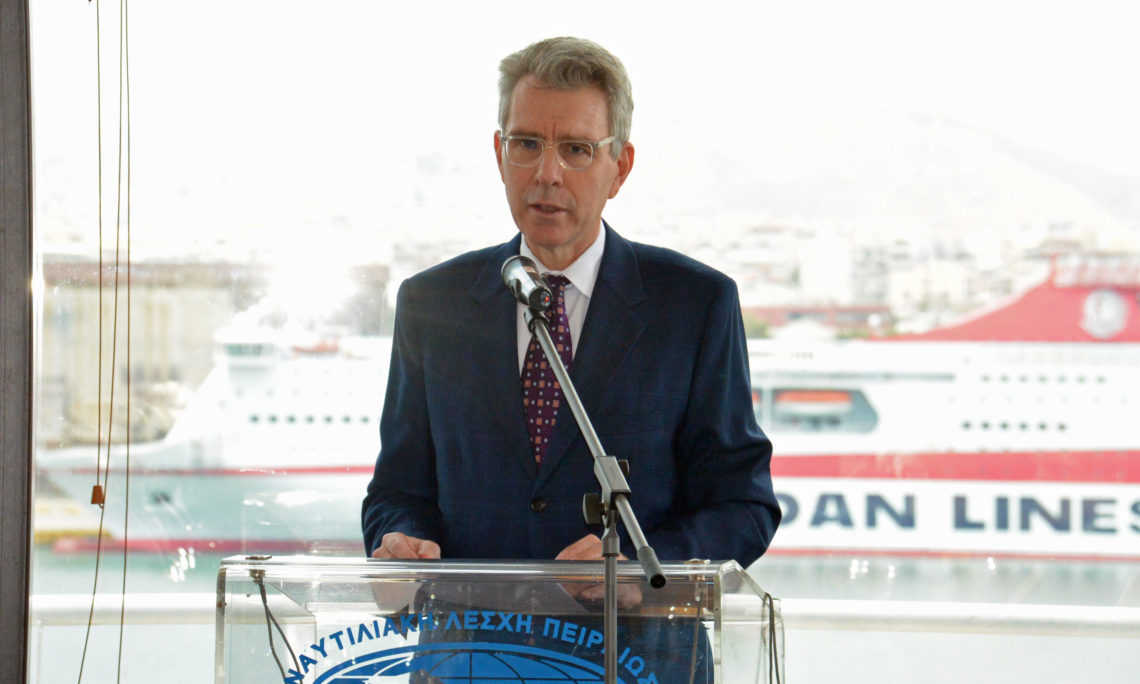 Thank you Irene, both for the invitation but also for the opportunity to come down here to see so many friends from the Greek shipping community, to see Piraeus on a beautiful afternoon at the early beginning of the summer. I really want this to be as much of a dialogue as possible so we can talk a little bit about what I anticipate to be a particularly intensive period of U.S. – Greece economic and commercial engagement that will culminate with our role as the honored country at the Thessaloniki International Fair in September.

But before I get to that, I want to add a personal note as well. I was reminded, as I was stuck in traffic, that summer is coming, here in Piraeus. But summer for the State Department and for Embassies around the world is also the season of transitions. And we have a couple of important transitions on the economic side of the Embassy. One of which actually starts this week. So, I want to just single out Brian Hoyt, who I know many of you know because he has the funnest portfolio in the Embassy as the person who works with the Greek shipping community. But Brian has been a fantastic part of our Embassy team, he’s worked intensively with all of you. We’ve had some fun together, including a famous trip to Syros in connection with the hopefully, soon to be concluded sale of the Syros Shipyard to an American group. Brian has been doing his own version of China’s belt and  road, his wife has been serving in China while he’s been here. And they get to come together now for a tour in Pakistan. Brian, I know I speak for all your friends in saying how much we’ve appreciated your good humor, your intelligence, your creativity in working on a portfolio that’s really vital to the U.S.-Greece relationship – and that is shipping and the maritime sector.

Of course, Greek shipping is a big part of the U.S.-Greece economic story. The size and scale of the Greek shipping industry, represented by so many of you in the room today, is a tremendous achievement, for which the Greek people are justifiably proud.

And I always highlight the role the United States has played in helping to revitalize the Greek shipping industry following the devastation of the Second World War. It’s great to be able to look over my shoulder – we have the Hellas Liberty there as a reminder of how the United States facilitated the sale of hundreds of Liberty Ships to Greek ship-owners, it really helped to revitalize and facilitate the rebirth of Greek shipping after the Second World War.

Today, from where I stand, your community symbolizes the unlimited potential of the Greek people and the real stirrings of recovery that we’re starting to see here. The work you do helps to keep the world economy open, dynamic, and free; just as the strength and resolve of the Greek people helps bring peace, prosperity, and stability to Greece’s neighborhood.

I look forward to seeing even stronger cooperation between Greece and the United States in the upcoming months, and I am truly confident that 2018 will be a groundbreaking year for our bilateral relationship.

This engagement will include intensive cooperation between our two governments, like we’ve seen during the dozens of important visits we’ve held in the past few months, as we sought to build on the momentum from the Prime Minister’s trip to the United States last fall and the recent visits of high-level congressional delegations to Greece.

In this regard, and especially relevant to the maritime sector, I’m very glad we will be welcoming later this week Admiral James Foggo, who is the Commander of NAVEUR, so the Senior U.S. Naval Officer in the European theater and he will have an opportunity to spend time with some of our key counterparts including Admiral Apostolakis, Admiral Tsounis and others of the Hellenic Navy.

This also is going to be a very important year and a very important summer for the Greek economy. And the next 100 days are especially critical for the country, as you emerge from bailout programs and set course on the path that we all hope will lead to recovery and sustained economic reform.

There are several ways in which the United States and Greece intend to work together to ensure that Greece enters 2019 on the strongest economic footing it has been on in about a decade.

One important area is energy. The United States hopes and expects to see enhanced bilateral energy investment cooperation between our countries, including an overall energy strategy where Greece serves as a regional hub bringing diverse sources of energy into Europe and helping to build resilience and strategic stability.

And, clearly, the Greek shipping community plays a key role in this energy strategy, by facilitating the delivery of LNG around the world. Your investments in LNG tankers help advance our priories in ensuring that Greek and European energy markets have a diverse array of supply options.

Your tankers also facilitate the growth of US natural gas and petroleum exports, a strategic priority for the United States. It is impossible to overstate the importance at a strategic level of the United States’ emergence as a major energy exporter – and this is a trend is likely to only accelerate in the years ahead.

Another significant opportunity for enhancing U.S.- Greek economic relations is the upcoming Posidonia trade show. The U.S. Embassy’s Commercial Section has once again organized a U.S. Pavilion showcasing U.S. companies that will exhibit products and services with maritime applications. The large US presence at Posidonia highlights the strong interest that our firms have in bringing the latest knowledge and technology to the growth and modernization of Greek shipping.

Posidonia is also an opportunity for the Greek private sector, and so many of you in the room today and especially in the shipping industry, to present to the world Greece’s dynamic human capital and economic potential.

After Posidonia, I’ll be travelling to Washington at the head of what I expect to be another very strong delegation of Greek companies for the U.S. Government’s SelectUSA program. Through this program, we offer Greek companies interested in expanding in the United States the opportunity to meet with regional economic development organizations, who can explain firsthand the specific tax and investment incentives their cities and states can provide to foreign investors.

I encourage you all to consider making the trip with me to SelectUSA next month.

In June, I will also travel to New York with our partners from AmCham and the Athens Stock Exchange for a roadshow intended to get the word out on Greek economic recovery and the real opportunities here.

Finally, as I hope all of you are aware the U.S. will be the honored country at the Thessaloniki International Fair in September. President Trump has called this an opportunity for us to highlight, on the world stage, American enterprise, innovation and entrepreneurship, and he promised to send a high-level delegation to represent the United States. But the Thessaloniki Fair will also give us the opportunity to highlight our strong bilateral relationship in all the areas I mentioned earlier, whether economic, defense and security, or people to people ties.

Our Embassy team, in cooperation with the American-Hellenic Chamber of Commerce, is working on a series of events around the TIF, especially in northern Greece, to ensure participation of the highest level business delegations. I encourage you all to plan on attending some of these events and, of course, to visit the American Pavilion itself. But TIF will also be a very important opportunity for Greek leaders to get the message out to the international audience, including the United States, that Greece is back, that Greece is open for business, that the economy has started to turn around, that there are real opportunities here in terms of American and international investment.

In conclusion, I want to reiterate how proud I am to say that the friendship between Greece and United States has never been stronger. We have reached a very special moment in our bilateral relationship, and on both sides there is a commitment to continue and to build on this momentum.

Greece and the United States will continue to profit from strengthening the ties between our people, businesses, and governments, which will also benefit Europe and the wider Mediterranean and Balkans regions. As President Trump told Prime Minister Tsipras in the White House Rose Garden in October: “America’s friendship with the Greek people has been long and enduring.”

I look forward to continuing along this path of friendship to which so many of you have contributed. Together, we can ensure that 2018 is remembered as a year of economic recovery in Greece, but also as a milestone year in Greek-American cooperation.

Now, I look forward to your questions, if I’m allowed, and I also look forward to seeing many of you at Posidonia, in New York with AmCham and the Athens Stock Exchange, in Washington for SelectUSA, and in particular in Thessaloniki and at TIF this September.