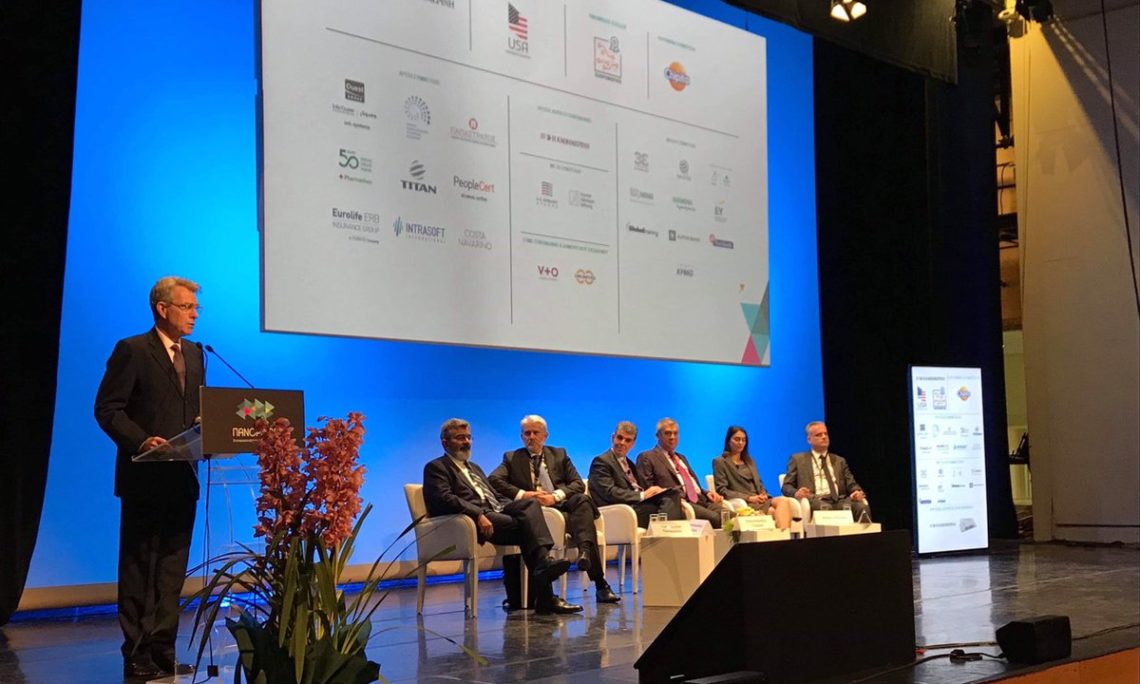 Καλησπέρα. Thank you Professor Ladopoule for that introduction, but most importantly for inviting me to speak this evening before the Panorama of Entrepreneurship and Career Development and to say some words aimed at the next generation of Greek business leaders.

There’s a lot of talent on the stage tonight, so I’m going to make this relatively short, but I want to start with a big idea, which is that, for me, it’s good news that we are able to have a discussion tonight that focuses not on the past but on lessons of the crisis that Greece is now leaving behind, and the opportunities for the future.

I’m going to focus on the second part of that topic and share some personal thoughts about where Greece is today and the opportunities that lay ahead from the perspective of someone who has had the good fortune to live in Athens over the past three years.

I want to say also that I was able to spend some time walking around the exposition this evening and seeing some of the companies that are represented here. I was really delighted to see such a strong showing from American companies, including our partners like KPMG, but I was also really inspired by the level of energy in the room. And I think that says something very hopeful and positive about Greece.

Greece’s exit now from its series of international bailout programs marked a welcome step in the return to economic normalcy. And this is a development that my government, the United States, strongly supports.

Looking ahead, I see four sectors of the Greek economy that offer particular opportunities for growth.  And I should say, these are all sectors that have attracted significant interest from American investors.

The first I’ll mention is the energy sector.  We are seeing in Greece today the truly historic completion of the Trans-Adriatic Pipeline, the successful completed expansion of the Revythoussa gas terminal and the emergence of Greece as a significant European energy hub, and irreversible progress on the Greece-Bulgaria Interconnector, the IGB pipeline. All these projects have helped to put Greece on the world energy map as a significant contributor to the diversity of energy sources and as an energy hub.

And as the recent participation of my boss Secretary of State Pompeo in the Israel-Greece-Cyprus trilateral summit in Jerusalem indicated, the official cooperation between the U.S. and Greece on these energy issues has never been stronger.

I should note that we also have a keen interest in the renewable sector, with strong moves recently from American companies in the fields of wind, solar and electrical power storage. These, too, offer great prospects for the future.

Transport and logistics is another area where the Greek economy is growing and is attracting international investments, including from U.S. companies.  In one example, since last April, the Greek-American company Onex has serviced and repaired 38 ships in the shipyards at Syros, creating more than 300 jobs in the process and helping revive this important economic asset that was, literally, rusting away when I first visited Syros in 2017.

Of course, the largest driver of growth in Greece in recent years has been the tourism sector.  U.S. investors ranging from Marriott and Hyatt to Airbnb are benefitting from and helping drive the rapid expansion of international visitors to Greece.

Continued growth in this sector will come from expanding the season and in diversifying the places in Greece that tourists are able to visit.

And lastly, there’s food and agriculture.   Greece has some amazing and unique food products that are loved by consumers all over the world.  There is great potential for exports in this field, especially in the U.S. market.

And these are all opportunities for Greece’s economic development and for strengthening U.S.-Greece economic cooperation, which were highlighted at the Thessaloniki International Fair last September, where the U.S. was honored country. And I’m delighted that we’ve been able to carry that tradition through to having the U.S. be the honored country this year at the Panorama of Entrepreneurship.

For U.S. companies and officials based in Washington, the TIF experience demonstrated the enormous potential of Greece and northern Greece in particular. It brought home that Greece is not simply a market of 11 million people but can serve as a gateway to the wider Balkans region.

And the commitment of the Greek government to take positive steps to unlock this potential creates significant new opportunities for international firms seeking to expand activities across a dynamic and growing market, where we stand ready to help.

Following our presence at the Thessaloniki Fair, the U.S. and Greece launched our Strategic Dialogue in December.  This initiative reflects a U.S. decision to make a significant investment in our relationship with Greece, to lock in and expand the important gains in our bilateral relationship – including on economic collaboration in areas like energy, trade and investment.  So, as I hope you can tell, I am optimistic about Greece’s economic future.

However, there are some lessons from the crisis that will also determine if those economic opportunities will bear fruit. A lot will depend on how the country carries forth the important work of implementing reforms to improve Greece’s competitiveness and ensure transparent business activities.  Policies to promote innovation, including the protection of intellectual property rights, are important so that Greece can compete in knowledge-based economy of the future and make the most of its tremendous human capital.

The government’s audio-visual incentive program and the new copyright committee aimed at reducing internet piracy are very positive first steps in this regard.

At the Thessaloniki Fair I was especially struck by the energy and enthusiasm of young people, local innovators, and entrepreneurs, not only at the U.S. Embassy’s Innovation Hub, but also in the Greek government’s ‘Digital Greece’ pavilion and among the young students at the Academic pavilion.

The growing number of Greek entrepreneurs is making a difference in building innovative companies and generating new jobs.  This is an under-told success story.  And building entrepreneurial skills among the young generation will be critical to sustaining this success.

That’s why the U.S. Embassy continues to work with local partners to bring U.S. models in entrepreneurship, education and skills development to Greece.

We partner with a lot of local entrepreneurship groups – the MIT Enterprise Forum, Mindspace, Endeavor, Found.ation, and Orange Grove, to name just a few – because we firmly believe that sharing American experiences can spark amazing innovation successes.  And we are expanding our collaboration with business leadership events like this Panorama of Entrepreneurship.

In that framework, I was very happy to welcome Cheryl Edison to Greece.  She’s been leading several discussions and workshops on entrepreneurship here at the Panorama and was already a big hit at the Orange Grove this morning. Like me, Cheryl comes from California, a state that has been defined by imagination, innovation, and the diversity that is America’s greatest strength.

We are also helping Greek businesses and startups expand their networks in the U.S. and build connections with their American counterparts.   For instance, we recently partnered with the Ministry of Digital Policy and the Hellenic Initiative to send a Greek delegation of startups to South by Southwest, one of the top global innovation, technology and investment summits.

So, in closing, I want to underscore how deeply invested the United States is in Greece’s economic success.  A strong, dynamic economy in Greece will lead to a stronger bilateral partnership between our two countries, and a greater ability to work side-by-side to advance our shared regional goals.  And you, the young people of Greece who are here tonight are key to building this more prosperous future.  And speaking for America, we look forward to being your partners, and sharing in your success.  Ευχαριστώ πολύ.