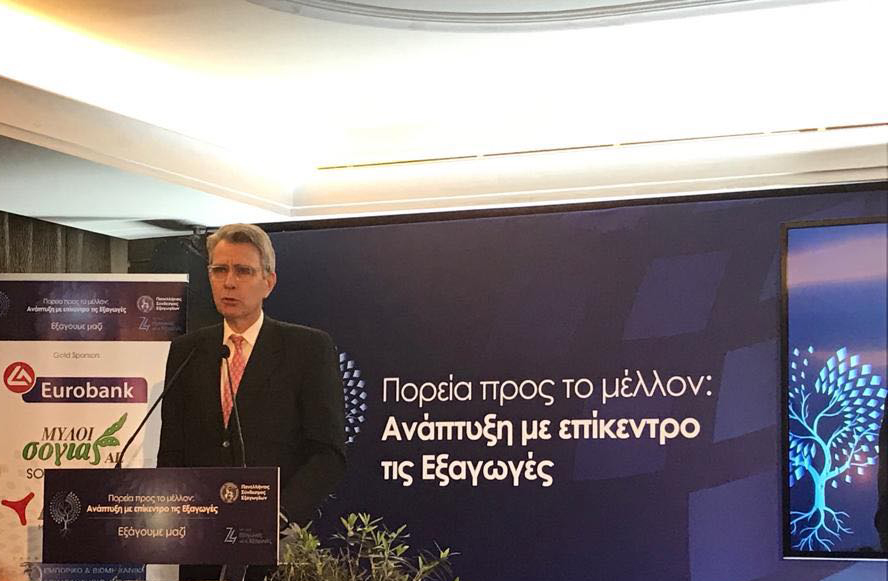 Καλημέρα σας. Thank you especially to Christina for inviting me to address this annual conference of the Panhellenic Exporters Association. I want to say it is a special honor to be here speaking in front of President Pavlopoulos who has done so much during my tenure to build and deepen the people-to-people relations between our two countries. Of course I want to acknowledge Minister Tzanakopoulos, especially Minister Pitsiolas, who has been a very strong advocate of our trade investment ties which are growing, and my friend George Koumoutsakos, who was recently in Washington D.C. where I think he heard a clear message of American commitment to our alliance with Greece and a commitment which transcends Greek politics and the political season that Greece finds itself in.

I saw Christina about a week ago at a discussion I hosted with Greek business leaders and startups at my residence to discuss the upcoming SelectUSA conference, which is an event that helps Greek businesses to expand their presence to the U.S. market. I remember looking around the room last week and realizing that there were about three times as many Greek companies in the audience as there were when I did my first SelectUSA in 2017. I think this is a very hopeful testament to the progress Greece has made in successfully exiting its series of international bailouts, and a signal that Greek recovery now is real. I look forward very much to again leading a group of Greek business representatives to the SelectUSA Investment Summit in Washington, DC, from June 10 until 12, and I think on all of your tables, you will find brochures that lay out some of the details on that event.

And following SelectUSA, I will join my colleagues from AmCham and the Athens Stock Exchange for a roadshow of Greek companies in New York. As the best performing stock market in the world so far this year, Athex and its listed companies have a very compelling story to tell about the dramatic changes taking place in Greece today following its exit from the bailout. These back-to-back events — SelectUSA in Washington and the Road Show in New York – demonstrate both the breadth of opportunities for investment in both directions and more broadly the opportunities for expanding US-Greek trade and investment ties.

The United States, I want to emphasize, sees Greece as a hub for trade, energy, and infrastructure developments in Southeast Europe and the Eastern Mediterranean.

And in this regard, I particularly want to congratulate Prime Minister Tsipras on yesterday’s very successful visit to Skopje with a large delegation of Greek companies. That visit sent a message of hope to all of Europe, but also helped to validate the investment that the United States has made in our relationship with Greece as a pillar of regional stability and a driver of prosperity throughout the Western Balkans.

I understand that most of you are interested in learning how to tap into new export markets including in the United States, and AmCham, through its TradeUSA program, is working intensively with Greek companies to develop export expertise and understanding. In fact, TradeUSA held workshops just this week in Patra yesterday and Kalamata on Monday. And I should say having spent a lot of time in the Peloponnese including Patra last week, I am very pleased to see AMCHAM focusing on that region, and I certainly know how much potential there is to expand the region’s exports to the United States.

Besides having the world’s largest economy, the United States is also home to the largest Greek diaspora outside of the Hellenic Republic. This diaspora is one of the great strengths of the U.S.-Greece relationship – our people-to-people ties – and it’s an invaluable asset for those looking to export to the United States, especially entrepreneurs. And we’re gonna keep working on this.

Over the weekend, for instance, I was pleased to join the Panorama of Entrepreneurship, where I met with Greek CEOs and with Greece’s next generation of business leaders. We brought an American expert here to help with Greece’s growing startup community to help build networking and presentation skills.

I highlight the startup sector because we’re fast approaching the Global Entrepreneurship Summit, which will happen in the Netherlands in June, with a focus on agro-tech and food startups. This is the first time that the Global Entrepreneurship Summit will happen in Europe, and it’s an important opportunity for Greece’s entrepreneurship sector to share its story on the world stage. Our Embassy, along with our good partners at the Dutch Embassy, is supporting a strong slate of Greek participants in this event.

And I’ve also been very pleased to be working in this regard with our partners at the American Farm School in Thessaloniki and also with the very impressive program that the Stavros Niarchos Foundation supports to build Greek agro-technology capacity with the facilitation of Rutgers University.

Entrepreneurship is thriving in Greece’s food and beverage sector, and through cooperation with AmCham, the Specialty Foods Association, and Enterprise Greece, our Embassy has been training Greek producers on how to enter the U.S. market. For instance, recent seminars with the president of the Specialty Foods Association, Phil Kafarakis – and here again, you see that diaspora factor – have helped Greek entrepreneurs in the food sector to understand how to better navigate U.S. import rules, U.S. distributors, and other logistical challenges. But progress is being made.

And there are many other sectors of relevance: energy, tourism, agriculture, telecommunications, smart cities, and much more. American exports of goods and services complement the digital development of the Greece’s economy. This provides new job opportunities, promotes entrepreneurship, and reverses the brain drain of so many highly educated and talented Greek professionals.

This phenomenon was vividly illustrated by the complementarity at the Thessaloniki International Fair between the American Pavilion and the Ministry of Digital Policy Pavilion on the other side of the road. And we’re working now with our partners at AmCham and HelExpo to sustain that partnership in the years ahead.

The final point I want to make is that trade is a two-way street. There are many, many examples of how U.S. exports of goods and services to Greece along with our bilateral investment flows are a win-win for both of our countries, and I will tell you frankly, my job is made a lot easier by the fact that our trade account and our investment relationship today is both growing and balanced.

So, I want to first of all congratulate the association on today’s event. I look forward to hearing from my colleagues on this morning’s panel, and I wish you all a very productive conference and a successful 2019. Ευχαριστώ πολύ.