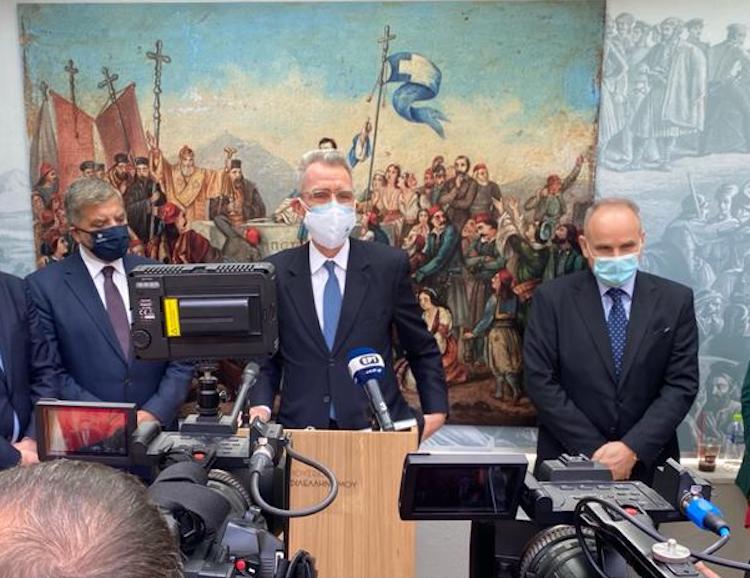 Kalimera sas.  Minister Vlassis, Minister Stefanis, my dear friend Governor Patoulis, colleagues, and friends, it is a great pleasure for me to join you here today for the special opening of the Society for Hellenism and Philhellenism’s Museum on Philhellenism.  I hope it’s easier to say in Greek!

Our Embassy is very proud to support the museum’s exhibition on “American Philhellenism” as part of our year-long campaign to commemorate the Greek bicentennial and the two hundred years of friendship between our great democracies.

We’re very proud to welcome the museum to the Greek cultural scene, and we’re excited by how this exhibit highlights the historic ties between Greece and the United States as part of its debut.

I really want to say a special thank you to our close partners at the Society for Hellenism and Philhellenism, Constantinos Velentzas and Fotis Papathanasiou.  I especially want to recognize Constantinos, since he’s really the heart of the museum, and the museum largely features his unique collection.

I also want to acknowledge the Embassy’s continuing partnership with the Greece 2021 Committee and the really important work that the Committee is doing to educate citizens about the importance and the symbolism of this bicentennial.  I can remember very well the emotion surrounding the American bicentennial in 1976, and it was really inspiring for me to see so many of those same feelings last March 25th around the launch of the Greek bicentennial.

I had the special opportunity to preview the museum a few weeks ago, and I know it has a very important story to tell about the far-reaching impact of the Greek Revolution not just on the United States but throughout the world.

Ancient Athenian ideals are a source of inspiration and pride for everyone who enjoys the rights and freedoms of democracy.  This was made very clear on Greek Independence Day when buildings around the United States and indeed around the world were turned blue and white, as leaders celebrated Greek independence.  President Biden, a very close friend of Greece throughout his political career, and Secretary of State Blinken sent strong messages honoring the day and expressing their commitment to our shared future.

As President Biden said in his address to the Greek people last month, “I’m incredibly proud to be the American president who will help launch the next 200 years of our close cooperation and friendship.”

Though European philhellenism is well known, I’m really delighted that the museum does such a good job of shedding light on a topic that does not get enough attention: the brave efforts of American women and men who 200 years ago stood shoulder to shoulder with Greeks to help Greece reclaim its birthright of democracy and independence.

The Greek and American revolutions are uniquely intertwined, inspired by the same democratic ideals and values.  And American philhellenes had an important impact on the early development of U.S.-Greece relations, which I am proud to say today are at an all-time high.

We are delighted to include the “American Philhellenism” exhibition in the Embassy’s celebration, “USA and Greece: Celebrating 200 Years of Friendship.”  In partnership with cultural and educational institutions around the country, cities, and individual citizens, we will seek to reaffirm and honor the unwavering bond between our democracies and strengthen the cooperation between our peoples that will be so important to the future of both our countries.

I also want to take a minute today to thank the Society for Hellenism and Philhellenism for honoring Special Presidential Envoy for Climate John Kerry with the inaugural Lord Byron Prize later this month.  I owe a special debt of gratitude to Secretary Kerry, since it’s under his tenure that Mary and I first came to Greece.  So I was delighted to learn that Special Envoy Kerry is in fact a direct descendant of the American philhellene Thomas Lindall Winthrop, who chaired the Philhellenic Committee of Boston, and of course, Secretary Kerry has continued Winthrop’s legacy of supporting Greece throughout his career.

I want to underline that American society has been enriched from its earliest days by our relationship with Greece and the Greek people.  And I’m extremely confident that even two hundred years from now, the United States will continue to stand by Greece as our trusted ally and partner.  So as we celebrate Greece’s bicentennial and look towards the future of our alliance, I’m proud to reaffirm the cry, Zito i Ellada.  Zito i Ameriki.  Efcharisto poli.