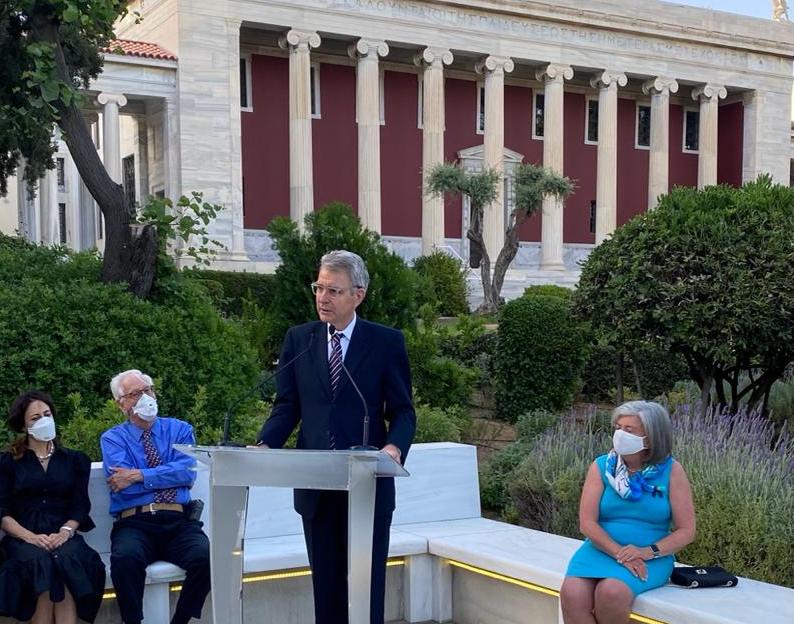 Thank you very much Jennifer.  And before I get to my remarks, let me just say what an enormous pleasure it is to be in this beautiful garden of the American School of Classical Studies in Athens on this beautiful Athenian early summer evening.  Nature is healing.  It’s something we can all applaud.

Let me say how happy I am to be able to join everybody this evening as we commemorate the opening of the Gennadius Library exhibition, “The Free and the Brave: American Philhellenes and the Glorious Struggle of the Greeks.”

The U.S. Embassy is extremely proud to support this exhibition as part of our year-long campaign, “USA and Greece: Celebrating 200 Years of Friendship,” which commemorates the Greek bicentennial and demonstrates how our nations’ revolutions were intimately linked, rooted as we are now in our deeply held democratic values.

The Embassy’s support for “The Free and the Brave” builds on our longstanding partnership with the American School of Classical Studies.  We are very proud of this relationship, and we hope and are confident it will continue to flourish in the future.

The Greek Revolution is a dominant theme in the Gennadius Library collection.  When we became aware that the topic of American philhellenism was not as well covered, we were delighted to be asked to help the American School continue the research that Johannes Gennadius began a hundred years ago to mark the centennial of the Greek Revolution and highlight this important aspect of our shared history.

I find it particularly fitting that this exhibit is being hosted in the Library’s Makriyiannis Wing, named in honor of national hero Ioannis Makriyannis, who fought in the Greek War of Independence and was later instrumental in establishing Greece’s first constitution.  The new wing is an ideal showcase for the School’s vast collections and a monument to its strong network of support in the United States.

In this regard, I would be remiss if I did not also mention my predecessor, friend, mentor, colleague, Ambassador Nick Burns who proudly serves on the board.  And I had the wonderful privilege just a short while ago to be on a video discussion with Ambassador Burns and Ambassador Alexander Philon, demonstrating that we are perfectly blending the worlds of the virtual and the physical in this transitionary pandemic environment.

I also want to say a special thank you to Dr. Maria Georgopoulou for so thoughtfully curating this exhibit, and to Constantinos Velentzas for contributing artefacts from his unique collection of philhellenic memorabilia.

I also want to acknowledge the Embassy’s ongoing partnership with the Greece 2021 Committee and the significant work that the Committee is doing, under the leadership of Gianna Angelopoulou, to help educate citizens about the importance of this bicentennial, including its U.S.-Greece dimensions.

Ancient Athenian ideals are a source of inspiration and pride for everyone who enjoys the rights and freedoms of democracy.  Early Americans recognized that they carried the torch passed to them by the ancient Athenians, and this special bond fed enthusiasm for the Greek cause.

Newspapers at the time called the outpouring of sympathy in America and our support for the Greek Revolution “The Greek Fire,” because it was “spreading like wild-fire through the country.”

We are delighted this exhibition will shed light on the brave efforts of American women and men who stood shoulder to shoulder with the Greek people to help Greece reclaim its birthright of democracy and independence.

In the two centuries since Greece’s independence movement began, our countries have learned and benefitted from our close cooperation rooted in shared democratic values.

Not only did American citizens come to the aid the Greeks during the 1821 Revolution, but American society was enriched from its earliest days by our relationship with Greece and the Greek people.

The philhellenism movement in the United States brought Americans together, increasing civic engagement, inspiring grassroots organizations to deliver our young country’s first foreign aid, and creating a shared call for liberty and equality which helped to advance the abolitionist and women’s suffrage movements in the United States.

This can be seen most clearly in the popular reception of one of the most iconic statues of the 19th century, Hiram Powers’ The Greek Slave, a model of which appears in this exhibition.

American philhellenes like Samuel Gridley Howe, James Williams, and Emma Willard knew that democracy is an ongoing project, and that the United States’ commitment to democracy abroad strengthens and deepens our commitment to democracy at home.  By participating in the Greek struggle for independence, these Americans helped the United States build on its own promise of “life, liberty, and the pursuit of happiness” for all.

Furthermore, American philhellenes had an important impact on the early development of U.S.-Greece relations, which I am proud to say today are at an all-time high.

We are thrilled to be able to include “The Free and the Brave” in our Embassy’s yearlong series of programs to commemorate the Greek bicentennial.  In partnership with cultural and educational institutions, cities, and individual citizens across this country, we are reaffirming and honoring the unwavering bond between our democracies and strengthening the people-to-people ties that will be so important to the future of both our countries.

President Biden put it well in his address to the Greek people in a message on March 25 when he said that he is, “incredibly proud to be the American president who will help launch the next 200 years of our close cooperation and friendship.”

The monument to the American philhellenes outside my residence in Ampelokipoi serves as a daily reminder of the longstanding alliance between our nations.  I’m extremely confident that two hundred years from now, the United States will continue to stand by Greece as our trusted friend and partner.

So as we celebrate Greece’s bicentennial and look towards the next 200 years of our alliance, I’m proud to reaffirm the cry, Zito i Ellada.  Zito i Ameriki.  Efcharisto poli.