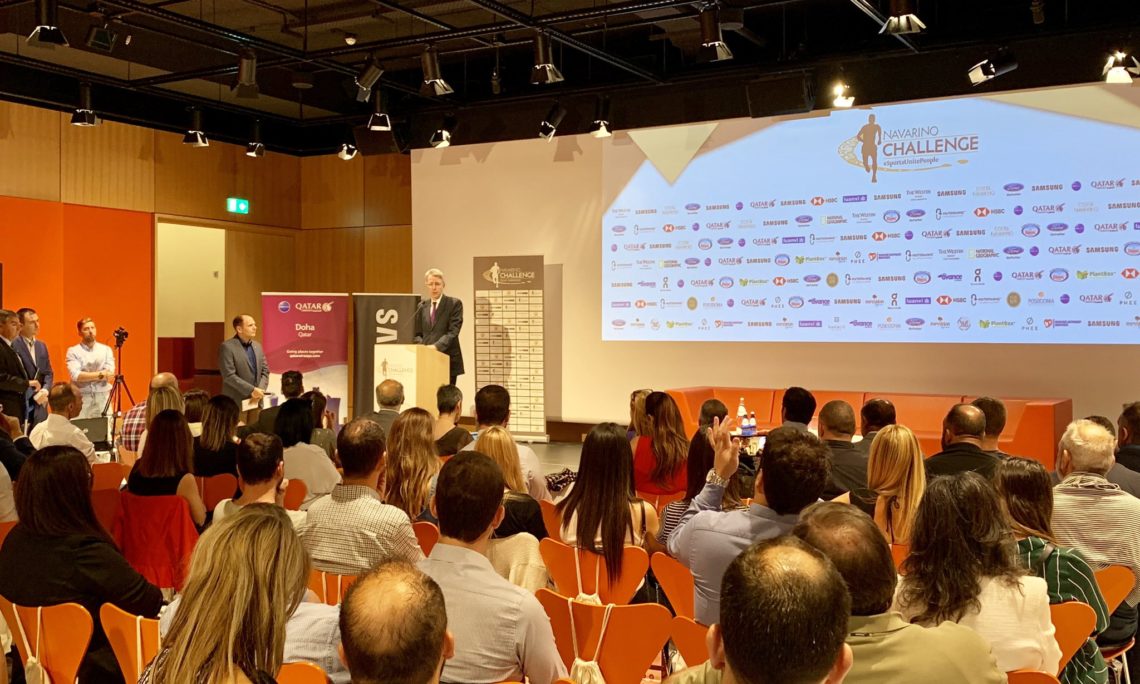 First of all, let me say what a pleasure it is to have my friend Dean Karnazes back here, someone who is a great ambassador for the U.S.-Greece relationship and especially our important diaspora.

This event, the Navarino Challenge, has many connections to the United States, starting with its location at Costa Navarino, a Marriott Westin resort, which has been an innovator in finding ways to grow the Greek tourism season.

This is a topic I had the opportunity to discuss just last week with Minister of Tourism Theoharis, and we agreed that it is a positive area for cooperation between our two governments.

I’ve had the opportunity to visit Costa Navarino on a number of occasions, but more importantly have traveled all over the Peloponnese. I had the opportunity with the Governor of Western Greece on Friday in Patra to talk about the prospects for growing the tourism offerings across the Peloponnese region. If you look just at the region of Messenia, you have Nestor’s Palace, you have Methoni, you have ancient Mycenae, you have Kalamata, you have Pylos, Navarino Bay, and not that far away, Monemvasia, ancient Olympia, so many deeply significant cultural and historic sites, but also the fantastic natural offerings and the food.

I also want to say just a few words about my friend Dean. Dean has been a sports envoy for the Department of State’s Bureau of Educational and Cultural Affairs around the world. He’s been generous whenever he is here in Greece, meeting with the Marines and others at the Embassy. He is a world-renowned American athlete, who is also very proud of his Greek identity and family roots, including coming back to Greece last winter, I guess it was, when he carried the the torch from ancient Olympia in the run up to the Pyeong Chang Winter Games. And like his colleague Nick, he’s somebody who has very much demonstrated the power of the Greek American diaspora to reinforce the bilateral relationship that I am here to build.

I have not done the Navarino Challenge, but my deputy, Kate Byrnes, who is now Ambassador in Skopje, participated last year. But I consider myself lucky over the past three years to have discovered a lot of the sports potential of this country, from hiking the spectacular gorges of Crete to exploring the ski slopes in the winter to cycling many thousands of kilometers around the country, including my completion last year of the Spartakiada from Athens to Sparti, and having done it on a bicycle, I have no idea how Dean did it running. Let me just say, it’s the most difficult thing I’ve ever done on a bicycle, and I was very glad when I finished after about six hours.

But I want to underline that we are hoping to see much more U.S. investment and involvement in the Greek tourism sector. We have great expectations for the Hellenikon project here in Athens, the investment that Minister Georgiadis announced on Friday of more than $300 million by the American investment group Blackstone in Greek hotel products. And, of course, Costa Navarino has been at the forefront in this effort to grow Greek tourism, to do so in a sustainable way that’s respectful of Greek culture and leverages all the fantastic aspects of this country.

So I wish good luck to all the athletes and a successful competition again this year.