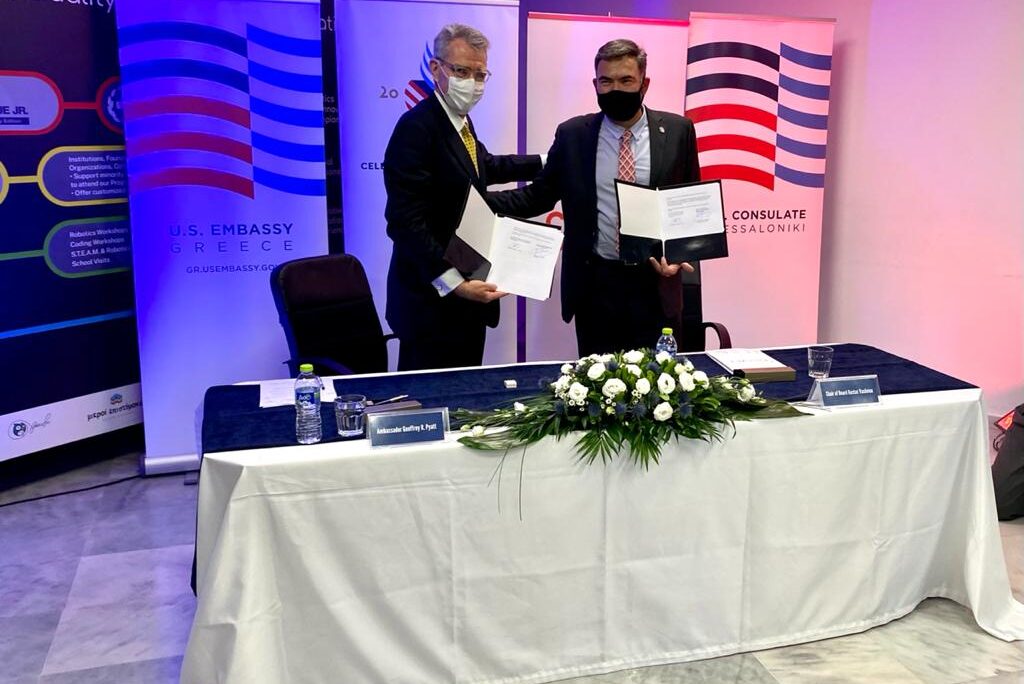 Kalimera everybody.  This is a fantastic day for the U.S.-Greece relationship and for especially our partnership with the city of Thessaloniki.

I want to start by acknowledging the various folks who have joined us here today, including the rectors of both Aristotle and Macedonia University and the Deputy Governor for Innovation.  We are very, very proud of the American partnership with northern Greece and especially with the city of Thessaloniki.

Today’s signing is the culmination of an effort that began in 2018 around the Thessaloniki International Fair.  Some of you will remember that at that time, we had as part of the very large U.S. delegation for the Thessaloniki Fair, Marie Royce, who was our Assistant Secretary of State for Educational and Cultural Affairs, and I did everything that I could with Marie to say, I wasn’t going to allow her to leave Thessaloniki until we had an agreement to establish a TechLab here in this second city of Greece.  It’s taken a little while, and I especially want to congratulate Ioanna, Cindy, and the folks from my team who worked so hard with the State Department team to bring this together.

This is our sixth American Space in Greece, but in many ways, for me it is the most exciting, because it compliments everything that we have been doing, building on the foundation of the Thessaloniki International Fair to support the emergence of this city as a significant technology hub in southeastern Europe.  We’re very grateful for our partnership with Kosta and with EduACT at all of our American Spaces around Greece.  And it was wonderful today to see the backstage for what we’ve already done together in Athens and in Xanthi and in Corfu and in Sparta.

But there’s a very special opportunity today in Thessaloniki because of the way in which American companies are investing here, helping to build the technology ecosystem, and the support that they have received both from the regional government, from the city government, Mayor Zervas, but also from Prime Minister Mitsotakis and his team.

I also want to acknowledge the really productive and important partnership we have with Minister Kerameus, who has been such a great champion of our educational partnerships, with Minister Georgiadis, who really believes in the technology relationship between our countries, and with Minister Pierrakakis and the Ministry of Digital Governance.

When I think back on 2018, one of the things I remember well is how much energy there was in the Ministry of Digital Policy Startup Pavilion, and all of those young people there who were bringing their ideas forward.  And I said to somebody yesterday, of those 200 or 300 companies, the majority have probably failed by now, but there are also some who have survived, and all of them are moving forward.  And it’s a reflection of the entrepreneurial DNA, which Greece shares with the United States, but also the opportunities for an even closer partnership between our technology companies and Greece’s.

So this project here for the TechLab Thessaloniki is about setting the foundation.  It’s about building skills in science, technology, engineering, and mathematics for young people.  It’s about encouraging people to experiment.  And as we say in Silicon Valley in California, to fail fast, to experiment and then move forward.

I’ve been so impressed by what EduACT has done with the other American Spaces, the other TechLabs.  But I think this one in particular has the prospect of having a strategic impact because of the synergy with the university community, but also the synergies that we are building through our new Science and Technology Agreement with universities in the United States, and the relationship that this provides in terms of creating the human capital to support the further growth of companies like Cisco and Pfizer, Deloitte, IBM, who have put down roots here in northern Greece.

So thank you all for joining today.  I am very excited.  The hope is that by November the TechLab will be operating in the space where we’re all sitting now.  And based on what I have seen of the work that EduACT has done with the other TechLabs, I’m very confident that this is going to be a space that will be full of energy but also a source of inspiration for the young people of Thessaloniki.  So thank you very much.  Efcharisto poli.