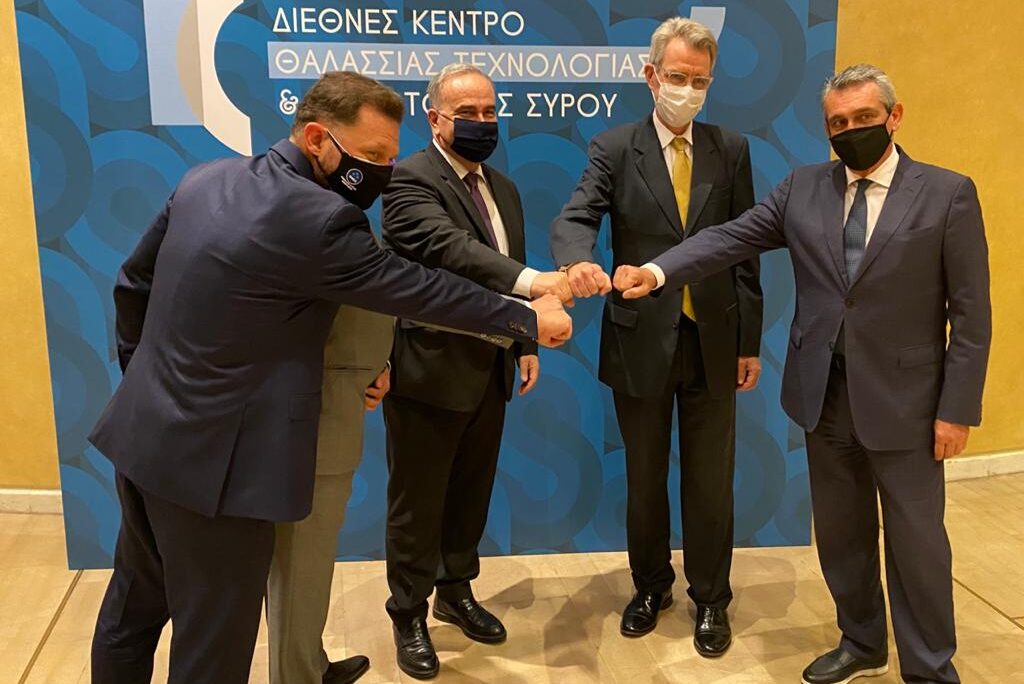 Kalispera sas.  It’s nice to see some friends live and in person after much too long. Minister Papathanasis, Governor Hatzimarkos, Metropolitan Dorotheos, Antonis, Panos, I’m thrilled to join you for the signing of this MOU, which will make the region of the South Aegean a co-founder and key partner in the ONEX-Cisco International Maritime Technology and Innovation Center in Syros.

This year, as we celebrate the Greek bicentennial and 200 years of maritime partnership between the United States and Greece, the ONEX-Cisco MOU will help to reinforce cooperation and digital interconnection in the Aegean.

Specifically, today’s MOU will build on the new high-tech partnership between ONEX and Cisco, to ensure that the entire South Aegean region benefits.

Having the Cyclades just a few hours away is one of the best parts of living in Athens and serving here in Greece.  And it’s no secret that Syros is one of my favorite places, an island that has played an important role in Greece’s past and now is helping to shape the country’s future.

As Greece 2021 President Gianna Angelopoulou noted during her visit to Syros in the fall, the people of that island offered shelter to refugees from Chios, Samos, Crete and other islands, who were uprooted during the Greek revolution.  Syros financed the Greek revolutionaries and built even then a unique commercial and industrial center in Ermoupoli that paved the way for Greece’s reconstruction after the war of Independence.

Two centuries later, the noble lady of the Cyclades is once again contributing to Greece’s economic growth.

We are very proud also that the U.S. Navy has now certified the Syros shipyard to conduct maintenance of U.S. military vessels, and I am confident that as the partnership between our navies continues to grow, ONEX and Syros will reap the benefits.

Earlier this week, the head of the U.S. Navy’s International Program Office Admiral Morley and his team visited Athens to present our proposal for the Hellenic Navy’s Future Frigate program to Minister Panagiotopoulos and Vice Admiral Petrakis.

Our proposal is backed by a government-to-government agreement that emphasizes local co-production in Greece, and it is informed by the U.S. Navy’s assessment of the capacity at Elefsina and Scaramangas to construct the frigates that we are offering.  This in turn would boost the Greek shipbuilding industry and create hundreds of new jobs and synergies across the Greek maritime sector.

This major investment and the rebirth of Elefsina and Scaramangas will spur further the revival of Greece’s long maritime traditions and enhance interoperability and collective security in this strategic region, serving American interests and strengthening the NATO Alliance.

Meanwhile, U.S. technology companies like Cisco are expanding their footprint in Greece, assisting Greece in its efforts to become the technology and innovation hub of southeastern Europe.

Minister Pierrakakis and his team at the Ministry of Digital Policy deserve great credit for the fantastic progress we have seen in Greece’s digital infrastructure during the past year and a half of the pandemic, including Greece’s cutting-edge vaccine appointment system.  And now, after strong leadership from the Greek government, the European Parliament is moving forward with the EU Digital COVID Certificate, which will facilitate freedom of movement and economic recovery efforts.

A few months ago, I also had the opportunity to join Minister Pierrakakis at one of the DigiTalks events hosted by the Cisco Hub and the Digital Communication Network of Southeastern Europe in Thessaloniki.

I was very impressed by this program and look forward to supporting future events and partnerships hosted by Cisco in Thessaloniki—hopefully in person before too long.

And in the meantime, I’m delighted that the ONEX-Cisco Maritime Technology and Innovation Center is moving forward with support from the Government of the region of the South Aegean. And I want to congratulate my friend Governor Hatzimarkos on this accomplishment.

Powered by Cisco’s cutting-edge technology and located at the epicenter of Greece’s long shipbuilding traditions, the center is poised to transform Syros into a beacon for 21st century seafaring.

Working together, I’m confident that ONEX and Cisco will further unlock the ingenuity of Greek seafarers to bring prosperity to communities not just in Syros, but across the South Aegean.

And I’m sure that the beautiful islands of the South Aegean will see many American tourists this summer assisting with the economic recovery of the region after the pandemic. As that new great Tourism Organization video says, “All we want is Greece,” and this summer there are more direct flights connecting the United States and Greece than ever before.

I am proud also that American companies and the U.S. government are playing a central role in helping to reinvigorateGreece’s shipbuilding industry with next-generation technologies that will revolutionize Greek shipbuilding.

Our countries have supported each other at sea since Greek independence fighters first wrote to David Farragut, the first Admiral of the U.S. Navy, and the leader of America’s squadron in the Mediterranean protected private vessels delivering humanitarian relief and provisions from our philhellenic committees in the United States to the Greek freedom fighters.

Together, our countries are working together in doing powerful, transformative work to promote security and stability in this strategic region and usher in a new era of shared prosperity.

I wish you the best in this new undertaking and look forward to hearing the results of today’s conversations.