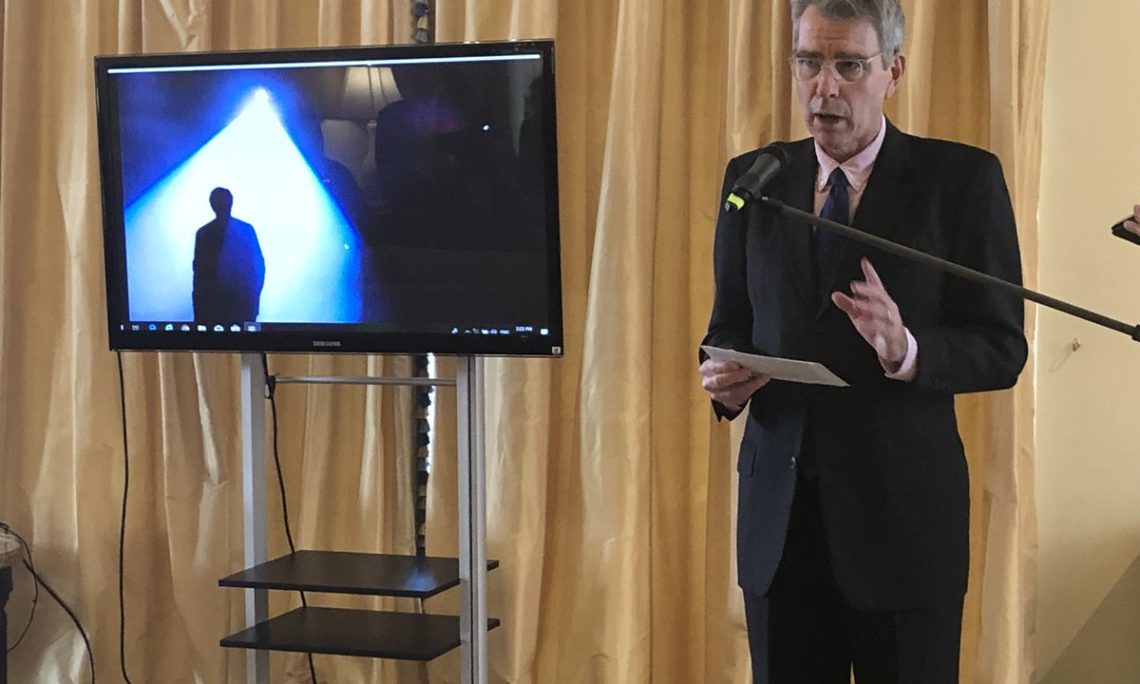 Celebrating the ‘Heroes’ at Launch of Public Awareness Campaign

The first thing I am going to do — except from thanking everybody for showing up this afternoon — is to apologize for the fact that we are doing this inside. And the only way I can apologize or make it up to you is to promise that as soon as we are done with this video portion and a couple of quick introductions, everybody is more than welcome to enjoy the garden. It’s definitely the best day of the year and probably one of the best days of all of 2019.

We are very excited to call everybody together this afternoon as part of the launch of a project which builds on an initiative that we began around the time of the Thessaloniki International Fair to lift up the U.S. – Greece bilateral relationship.

Some of you may recall the first phase of this campaign, which we ran up in Thessaloniki mainly in September around the TIF. There were buses; there were public billboards and also prints and television media, all of which was built around the theme of the U.S.- Greece people-to-people relationship. And I’m glad we got some of the folks who participated in that phase who were with us — Constantinos from TESLA, Danae who was part of that one as well,  Sotiris up here — I think that’s everybody and I apologize if I’ve missed anybody who was part of that first phase.

This is the second phase, which profiles in particular Greeks and Greek-Americans who embody the U.S.-Greece bilateral relationship – people who have taken the best practices from their studies or careers in the U.S. and have applied it to their work and lives here in Greece.  These are individuals who are leaders in culture, in civic society, in scientific research and in engineering.

I’ve often pointed out during my time as Ambassador to Greece, that the foundation of our bilateral relationship, is the people-to-people ties.  And now,  through this series of profiles that we’re going to be launching in Greek media starting tomorrow,  we aim to demonstrate our dedication to building bridges across the Atlantic that deepen our mutual respect and admirations of each other’s cultures and people.  This campaign is an opportunity for Greeks to learn more about the value of the engagement between our two countries.

At the inaugural session of the U.S.-Greece Strategic Dialogue last December in Washington, people-to-people ties were one of the six key pillars that Foreign Minister Katrougalos and Secretary of State Pompeo emphasized. We’ve worked with our partners at the Ministry of Education and Culture to focus on areas of cooperation for educational exchanges, sports diplomacy, and cultural cooperation.  And now with this series of profiles, we want to turn the spotlight on a few of the many individuals who went to the U.S. for work or education and returned to Greece to apply the expertise they gained in the United States.  Through their stories, these individuals provide testimony about the positive value of the networks between our two countries.

So, I’m going to take a quick minute now to introduce the next round of people-to-people heroes and I think we also have take-away materials for everybody so nobody has to take notes:

First, Konstantinos Arvanitakis – the President of the Hellenic Centre of the International Theatre Institute, who studied at New York University and UC Irvine.

Second, Zoe Cournia – who’s a researcher at the Biomedical Research Foundation Academy in Athens, and was a post-doc and lecturer at Yale.

So my two almae mater are represented in the first two, but that’s entirely coincidental.

Anastasia Kostaki – the first Greek woman to play professionally for the Women’s NBA in the U.S. and a professional player and coach in Greece as well as a member of the Greek Olympic Basketball Team.

Leontios Hadjileontiadis – a professor of Electrical and Computer engineering at Aristotle University, who received the Faculty Champion Award for the Microsoft Imagine Cup in 2012.

Evangelos Pappas and Dimitris Makris – the founders of RTsafe, a scientific research company recognized by the Hellenic Entrepreneurship Award in 2014 for their efforts to optimize the safety and effectiveness of radiotherapy for cancer patients, with support from the University of Texas.

Sofia Kounelaki – the Executive Director of the Home Project, an initiative supported by the Greek American Libra Group to provide shelter for unaccompanied minors, as well as a proud graduate of Brown University.

Haris Siabanis – the CEO of the Benaki Museum and alumni of Tufts and the Harvard Business School, who is of course also looking for ways to collaborate with U.S. cultural institutions.

Sophie Lambrou – Co-Founder and Managing Director of the Impact Hub Athens and lead for the renovation of the Kypseli Market, after participating in an International Visitors Leadership Program grant on Social Innovation and Change.

Alexandros Trimis, who is a Stanford Alumnus and the co-founder of Welcome Pickups, a travel tech startup that is forging new ground for comprehensive online bookings.

And Sotiris Bantas – the co-founder of Centaur Technologies, a startup aimed at perfecting food quality, enabling abundance and reducing waste.

And last, but definitely not least, Panos and Eva Kanellis – the President and Dean of the American Farm School in Thessaloniki, a model educational institution that shares best agricultural practices and is at the forefront in programs to encourage entrepreneurship for agro-business with their ongoing initiative with Rutgers University, which is supported by Stavros Niarchos Foundation.

And I will as a footnote on this one, I was in Thessaloniki with Panos about two weeks ago and had the opportunity to sit down with the team from the Rutgers’ project, and it deserves much more attention as a real example of how the private sector supported by civil society organizations is doing really transformative work to lift up entrepreneurship and grow the Greek economy.

So as you can see through all of these individuals, there is an energy and dynamism to the links between the U.S. and Greece that goes across many sectors.  It’s these layers of education and business and civic engagement that provide depth and richness to our bilateral relationship.

So I am very excited to share their stories with you and to showcase the depth of our ties.  We want to capture the momentum coming out of the Strategic Dialogue in Washington, and the growing constituency for the bilateral relationship in my country, but also to help people here understand and appreciate both the critical role that Greece plays, but also the way in which people-to-people ties between our two countries are contributing to the work that all of us diplomats do in support of it.