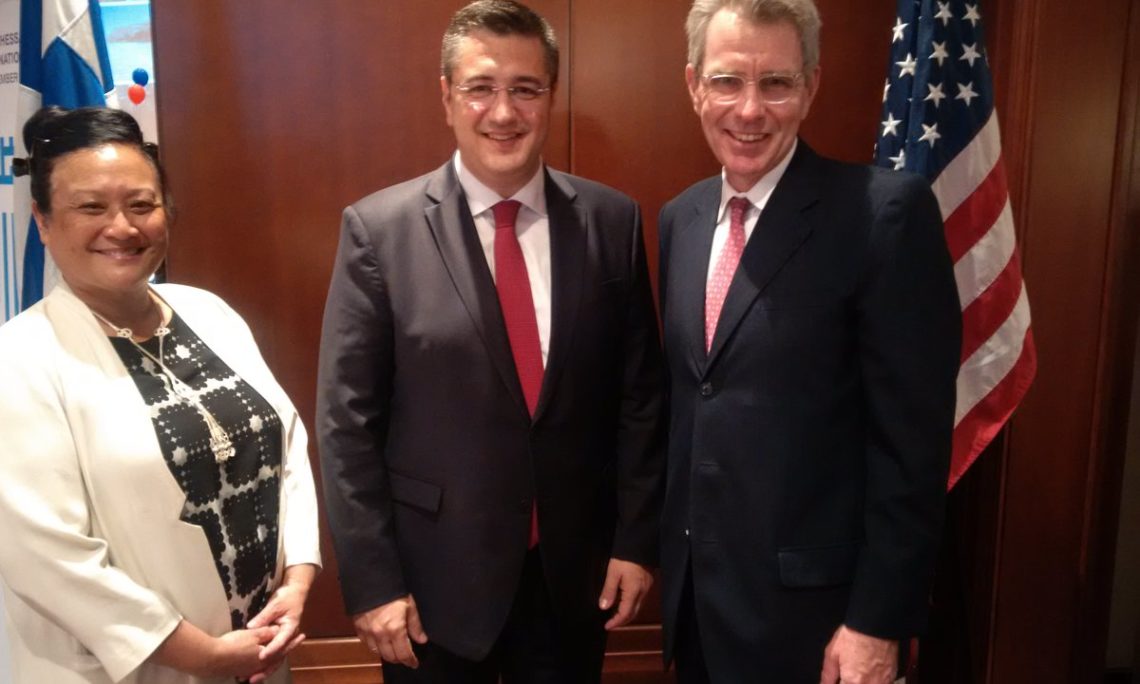 Good evening and welcome. Mary and I are delighted to be back in Thessaloniki amid a particularly important year for U.S. relations with Northern Greece.

And I know everyone in this room tonight, is aware that the United States will be the honored country at the Thessaloniki International Fair in September. And that’s one reason why I have made this city my second home in Greece over the past two years. But what you may not know is that the person who first imagined this TIF idea and thus drove the process to make it happen is our Consul General, Rebecca Fong.

So apart from this being the 242nd anniversary of American Independence, tonight is an opportunity for me to say a few words about our terrific Consul General.

As Rebecca just alluded to, in her remarks, she has had a terrific tour here in Greece. I know how highly she is held in regard by everyone in attendance, which is a tribute to the fantastic impact that she and her team have had over the past three years. She will be greatly missed.

But what has made such a big impact on me is Rebecca’s passion for her work here, and for the role of the United States in Northern Greece. For instance, she has been a stalwart advocate for refugee rights – she spent tireless hours working on these issues before and after the northern borders closed during the winters of 2015/16.

She always engaged passionately with students, supporting programs like Code Girls that inspire young women to pursue careers in science and technology. She was a fantastic advocate for our Camps to Campus Program with two of the great American institutions here in Thessaloniki—Anatolia College and the American Farm School. She spoke often with students on international relations, on diplomacy, the US Foreign Service, sharing her experiences from Syria to Iraq. She marched for Pride and for Holocaust victims, mentored students for Model UN, and travelled extensively through this beautiful region of Northern Greece. I think she might have even attended more pitta cutting than I have.

But Rebecca’s most important legacy here in Thessaloniki will be the upgrading of America’s presence in Northern Greece—something that she encouraged me to pursue from my first days in this country, usually with the partners that she’s introduced me to and who we are privileged to have with us here tonight. People like Governor Tzitzikostas, General Vikos, and many, many Mayors and Deputy Mayors from across this region of the country.

So Rebecca, I hope you’ll be tuning in on September 7 when we kick off TIF week, and I hope you will take justified pride in what you have launched.

But for tonight, we take this opportunity to celebrate the day that our Founding Fathers declared independence, and in doing so took the first step towards the creation of a nation based on democratic values and self-determination. It gives me tremendous pleasure to celebrate this day in Greece, the birthplace of our democratic values.

What the ancient Greeks inspired in our Founding Fathers 242 years ago, planted the seeds for the strong U.S.-Greece alliance that we celebrate today, and the role that Greece plays as a pillar of stability in a complicated region. This stability is important to the success of the wider American agenda in Europe. So it’s only fitting that on July 4th itself Prime Minister Tsipras will meet here, in Thessaloniki, with counterparts from Bulgaria, Serbia, Romania, reinforcing the pivotal role that Thessaloniki is again playing in the politics of the wider southeastern European region.

Greece’s role as a regional leader is one of the reasons why I’ve spent so much time and energy promoting this year’s Thessaloniki International Fair. What better way to celebrate the United States than to showcase the American spirit of enterprise, innovation and entrepreneurship.

But as I pointed out last week in New York and Washington, traveling with our partners from the American Chamber of Commerce, TIF will also provide a platform to highlight Thessaloniki and northern Greece’s strategic role in creating economic linkages to the Balkans. And I hope that we will all meet the high mark that Rebecca has set for us – and if we don’t, I know she’ll be in touch.

So, please join me now to raise your glasses in a toast to the 242nd anniversary of the Declaration of Independence of the United States of America, and also to our friendship, our freedom and our collective pursuits of happiness.