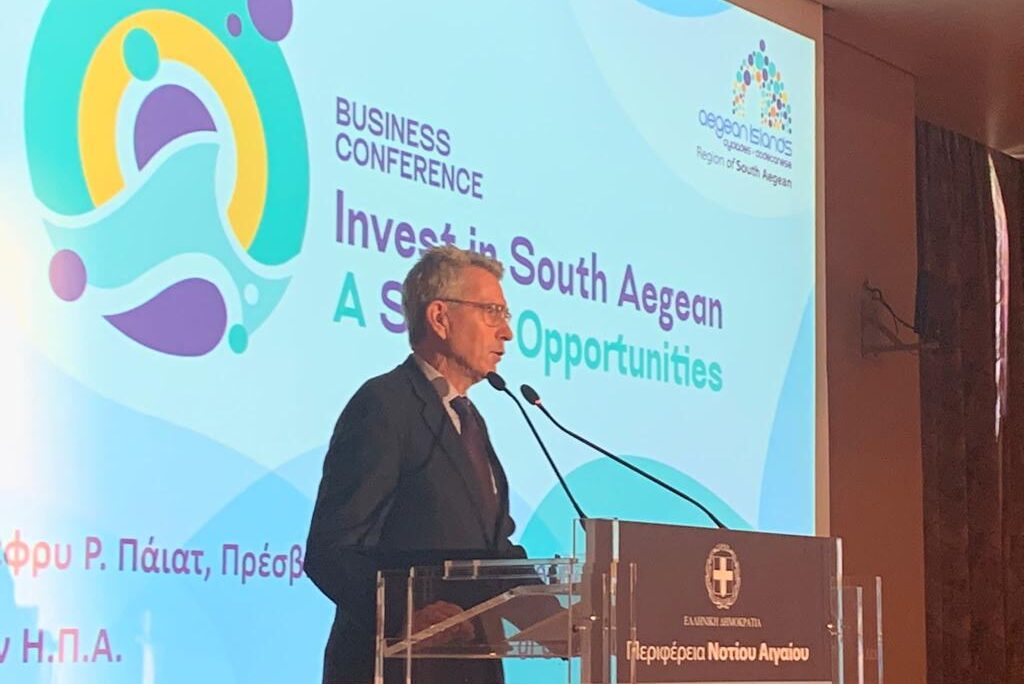 Kalimera sas. Governor Hatzimarkos, Minister Papathanasis, Secretary General Chrysoulakis, Lou, Senator Raptakis, my fellow Americans, thank you for having me here this morning.  I want to start by saying how great it is to be back on the island of Rodos, even in this difficult time with the fires.  I have traveled a lot around the South Aegean over the past five years, but I haven’t been back to Rodos since 2017, when I was here for a U.S. Navy ship visit.  So it really is terrific to be back and to see so many friends from around the region.

It’s also fantastic to see so many of my fellow Americans here in this part of Greece, and again, Lou, I want to thank you for your leadership in bringing this large delegation to Greece and making sure that they were able to see so much of the substance of our bilateral relationship, the critically important cooperation that happens every single day at NSA Souda Bay, the strategic frontier represented by the Greek island of Kastellorizo, which was very much in the news a year ago when tensions were very high between Greece and Turkey, and here in Rodos and in the South Aegean, which is a region that embraces so much of what Americans think of when they think of Greece.

This is very much the year of the Americans in Greece.  I was amazed when I was flying in to Rodos yesterday afternoon, my Aegean Airlines flight was full of American tourists, and I think it’s very important that we have those direct flights that Lou talked about.  I know that Tourism Minister Theoharis is very, very focused on continuing to build the Greek-U.S. tourism market.  In many ways, tourism is the heavy industry of the Greek economy, so it’s really significant that we have so many Americans coming this year.  We tend to be big spenders, we stay longer than European visitors.

It also provides reinforcement to another very significant development this year in particular, which is the large number of American cruise companies which, for the first time ever, are running direct Aegean-only routes.  So they’re starting and ending in Piraeus, which pumps much more money into the Greek economy than the traditional Mediterranean cruise, which starts in Spain or Italy and just stops by Santorini or Mykonos for a day or two.  So we’re very excited about all of this.

When we spoke on Friday at the Chief of Mission’s Residence in Athens, I didn’t get to say much about the economy, so I wanted to take a couple of minutes just to talk about some of the major trends that I see.  I should start by emphasizing how important the economic agenda is for Prime Minister Mitsotakis.  We have to remember that this is a country which experienced a severe, ten-year economic crisis, lost 25% of gross domestic product.  So, basically, the same amount of economic dislocation that we suffered in America during our Great Depression, and saw unemployment reaching as high as 50% among youth.  I was glad to read yesterday that Greek unemployment numbers just reached the lowest level they have seen since 2011, which is a sign of how far Greece has come in overcoming that burden.

But I will say, when I arrived here five years ago, that was by no means assured.  People worried even then about whether Greece might leave the Eurozone.  About whether one of the big systemic banks might collapse because of insolvency, and whether Greece would conform with the very severe conditions that were imposed by the European financial troika.

So it is a significant accomplishment that Greece has left that crisis period behind, and in fact, in many ways, Greece is positioned to emerge from the COVID shock much more strongly than others in the European Union.  Governor Hatzimarkos talked about the 32 billion euros that will be pumped into the Greek economy through the European recovery fund.  Prime Minister Mitsotakis has committed to prioritizing the green economy and technology and digital transformation in the allocation of those funds.  That of course is good news for America, it’s good news for our Embassy team, because that priority fits perfectly with the priorities of the U.S. government.

One thing that’s also important to note is that unlike so many other places in the world, the Mitsotakis government did not stand still during the pandemic.  In fact, the government continued to push ahead with economic reforms.  By far the most significant is the digital transformation, the application of technology to e-governance, again, much of that in partnership with American companies, with Microsoft, Amazon, Cisco, Google.

All of you would have gotten your QR code PLF, the Passenger Locator Form, before you arrived in Greece.  That runs on an Amazon architecture.  All of the Greek COVID vaccination process has been run on a cloud infrastructure.  Very, very targeted efforts to get vaccines out and to prioritize those, and then to make sure everybody has a digital vaccination certificate.  I actually have one myself.  So I have my little paper CDC card, but much more useful for getting into airports and things is my Greek government COVID vaccination certificate with the QR code on it, which allows authorities to confirm the validity of my vaccination.

I’m very excited about how this digital transformation is creating opportunities for American business.  We’ve seen a number of major new investments in Greece by American technology companies.  Microsoft committing hundreds of millions of dollars to a cloud computing center in Attika, Amazon Web Services following close behind, and I was able to congratulate Minister Papathanasis on a new cooperation agreement that the government and Amazon signed yesterday focused on space technology.

We have seen significant new investment in Thessaloniki by Pfizer.  I had the great pleasure of getting to know Albert Bourla, the CEO of Pfizer, long before he became the most famous pharmaceutical CEO in the world.  But Albert and his company have made a very successful major commitment to a digital innovation center in Thessaloniki which is now being expanded with the potential to grow up to a thousand headcount focused on things like artificial intelligence and digital applications.  So there are very, very exciting developments there.

A number of other American companies are deepening their roots in Greece.  Cisco is expanding here.  From California, Applied Materials has acquired a Patras-based chip design firm.  So there’s a lot going on.  And we at the Embassy have worked very hard to support that development and the opportunity that it creates to grow the ties between our knowledge-based economies.

Since I’m on knowledge, I should also say a quick word—and I’m delighted that the rector of the University of the Aegean, Professor Vitsilaki, is with us today.  I know that she’ll be speaking later on.  We’re very, very excited about the work that is being done to build ties between our universities.  I think I mentioned this briefly on Friday at the Residence, but the government, and in particular Education Minister Kerameus has made a major commitment to building institutional ties between university education in the United States and Greece.

That will create opportunities for more American students to come to Greece to do semester abroad, to learn about this part of the world, but most importantly to me, as the parent of two young people, both of whom are newly entered in the workforce, the importance of getting our young people to understand how the global economy works, and the different strands that contribute to the global economy and have made our culture what it is.  So I’m very excited about that, and as I said to Rector Vitsilaki, I think she won’t have a hard sell in pitching American students on the idea of a semester abroad on an Aegean island somewhere in Greece.  So we’re very excited about that.

I want to mention a couple of other sectors where we continue to see growth in U.S. engagement.  One project that I’ve worked on closely with Governor Hatzimarkos, which is of strategic importance to the United States, is the revival of the Greek shipbuilding industry.  Greece, of course, has a very long maritime tradition and one of the world’s largest merchant fleets.  Much of the world’s liquid natural gas bulk carriers are Greek-owned vessels sailing around the world.  But Greece, though the crisis years, lost most of its shipbuilding and ship repair infrastructure.

So I’ve been very proud that an American company, New York-based Onex, has led the way to the revival of the Syros shipyard.  Syros is a beautiful island if you have not been there, very distinctive, some of the best architecture you’ll find anywhere in the Mediterranean.  But it’s significant that now the shipyard has come back to life with American know-how, Onex has made a commitment also now to partnering with Cisco to develop, on Syros, a digital innovation center focused on the kind of technology upgradation that shipping is going to experience in the years ahead.  We’re very, very excited about the partnership there.  This also creates opportunities for the United States.  Among other things, the Syros shipyard has been certified by the U.S. Navy, by Sixth Fleet, to provide maintenance and repair to U.S. naval vessels.  So this is another illustration of how this is a win-win for the United States.

And finally, since we’re going to be hearing about the governor’s wonderful Aegean cuisine program, which I’ve enjoyed so greatly over the past five years at various restaurants around this region, I would not underestimate the importance of the food sector in terms of the Greek economy, Greek exports to the United States.  There’s a real renaissance of Greek winemaking underway right now, and there are a lot of very encouraging success stories of Greek startups that have gotten into the area of the Mediterranean diet, exported to the United States, and this is now starting to attract international capital as well.

I think everybody in the U.S. remembers the great feta cheese shortage of 2020 when everybody was cooking at home.  Not surprisingly, one of the big Greek feta cheese manufacturers has now been invested by an international fund and is looking to grow its market in the U.S. with huge customers like Costco.

So finally, let me just conclude by saying how much I’m looking forward to this conversation, how strongly your Embassy in Athens is committed to working with American business to support trade and investment opportunities between our two countries, but also to give you a sense of hope.  I think that’s one of the most important things I have seen in Greece over the past five years.  It’s very intangible, but the reacquisition among Greek young people, among Greek business, of confidence in themselves, their ability to complete in a global market, and to be very proud of what this country represents and what it offers to the world is one of the most important changes that I’ve seen over my tenure.

And I think it’s something of great importance obviously to the people of Greece, but also to the alliance between our countries at a time when President Biden has committed to Prime Minister Mitsotakis that we are going to continue to work as closely together as possible to ensure a sustainable recovery from the COVID pandemic and all of the disruption that has caused.  So again, Governor, thank you very much, it’s wonderful to be back, and I look forward to hearing the rest of the conversation this morning.