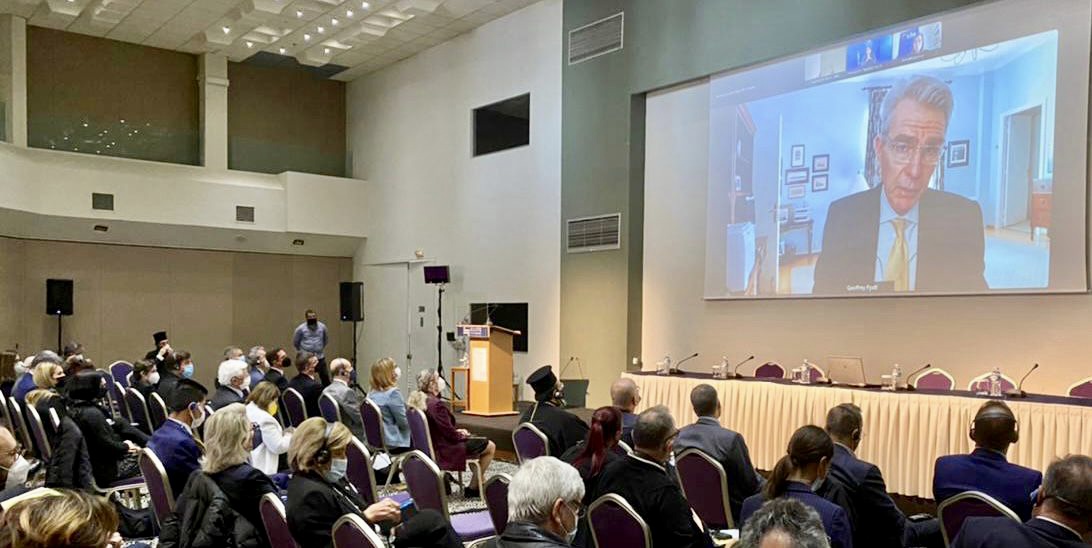 Efcharisto, kalispera sas everybody.  It’s a great honor for me to join you today.  And let me start by saying how deeply sorry I am that events in Ukraine and our work with our Greek allies prevent me from being with you there in person in Kalamata to engage on these important issues on a beautiful spring day in the Peloponnese.

I also want to start by thanking Minister Kerameus and his Eminence the Metropolitan of Messinia for working so closely with our team at the Embassy in Athens to organize this event.  Certainly, there could not be a more timely moment to have this conversation.

As Ambassador Amrani reminded us, just last weekend Minister Keremeus was in Xanthi for the unveiling of the new Holocaust Memorial there.  And I just want to say how fantastic it was to see the Minister and other Greek officials, the representative from the local Mufti and church leaders together with the Jewish community to celebrate this important day.

Obviously, northern Greece is a very important region for the U.S. Mission.  And we regularly engage there including through our presence at the American space, what we call our Xanthi Tech Lab.

So, Minister, I really want to applaud your efforts to stand against anti-semitism and intolerance, and to highlight the shared values that connect all of us.

And the reason why this event is so timely is, of course, what we’re all seeing unfold a few hundred kilometers to the north in Ukraine.

Early yesterday, we all saw the grotesque spectacle of Vladimir Putin justifying his bloody invasion of Ukraine by misappropriating history and claiming falsely that democratic Ukraine somehow needs to be de-nazified.  As someone who lived in Kyiv during the Revolution of Dignity, and worked closely with Rabbi Bleich and other leaders of that country’s Jewish community to understand Ukraine’s traumatic Holocaust history, I found President Putin’s assertion both painful and offensive to the millions of Ukrainians who perished in the Second World War.

I also want to welcome today there in Kalamata Ellen Germain, who is the State Department’s Special Envoy for Holocaust Issues, who made the trip from Washington D.C. particularly for this conference.  Of course, I also want to thank Mark Weitzman, the chief operating officer of the World Jewish Restitution Organization, and Dr. Laura Cohen, the Executive Director of the Harriet and Kenneth Kupferberg Holocaust Center of the Queensborough Community College.  They both worked closely with our Embassy to be here in Kalamata today and share their expertise with us.

I’m also very proud that we have so many other U.S. speakers in attendance today, experts joining virtually from the United States, including my U.S. Government colleagues from the Holocaust Memorial Museum in Washington D.C.

I also want to recognize my colleague, Ambassador Amrani, George Polydorakis, the Chairman of IHRA, and my dear friend David Harris, the CEO of the American Jewish Committee, for being here, along with Greece’s Member of the European Parliament Anna-Michelle Asimakopoulou, for all their participation today.

Thank you also to my other friends I see on the screen, Janet, David Saltiel, Makis.  Thank you all for joining this event.  We’re truly honored by your presence.

I want to say also how proud all of us at the U.S. Embassy are of the enormous efforts that Greece has made over the past couple of years to expand knowledge of the Holocaust, and educate the public, both about the Holocaust in general, but also its unique impact in Greece.

I’m very happy to see the progress that is being made, for instance, on the Holocaust Museum in Thessaloniki.  We very much hope that that museum will help not only to share the story of Thessaloniki’s vital Jewish community, but also to bring to light the reign of terror that this community suffered under Nazi occupation, and the almost 60,000 lives that were lost.

2021 was an important year.  We celebrated the Greek Bicentennial.  But it was also the year of the Greek Presidency of the International Holocaust Remembrance Alliance.  Over this year, Greece has helped lead the efforts of 34 nations, including the United States, seeking to combat Holocaust denial and anti-semitism around the world.  I really want to commend the Greek government again and publicly for its IHRA presidency, including in particular Deputy Prime Minister Pikrammenos, Foreign Minister Dendias, Ambassador Chris Lazaris, who led the Greek Government’s efforts on this front until just recently when he took on the even more challenging job with Ambassador to Ankara, and also George Polydorakis who took the reins after Ambassador Lazaris moved on.

As part of this year-long IHRA effort, our Embassy worked closely with Minister Kerameus and many others in the Education Ministry to make this conference today a reality.  We’re very proud of the results, bringing together government leaders, scholars, researchers, historians and students to share experiences and perspectives.

The Holocaust stands as horrific illustration of where unchecked hatred and intolerance can lead.  It’s one of the most shocking examples in history of humanity’s capacity to inflict needless cruelty.

But history also shows that if we all work together, we can build a better future.  And that’s why we’re here today.  We need to systematically counter Holocaust distortion and efforts to deny the Holocaust.  We need to stand together to combat anti-semitism and to educate present and future generations.

These are key policy priorities for President Biden and the entire U.S. government, including my boss Secretary Blinken, who himself is the stepson of a Holocaust survivor and a vocal advocate for the issues of memory and learning that Ambassador Amrani described.

Under President Biden and Secretary Blinken’s leadership, the United States has been taking important steps on this front as well.  Just last month, we co-sponsored a U.N. resolution that charged the international community with combating Holocaust denial through education.  In October, Secretary Blinken announced the inauguration of a series of leadership exchange programs that will help us to further advance our shared goals of countering Holocaust distortion and denial.

And, of course, we’re very proud of our work here in Greece to advance religious freedom and showcase how the United States and Greece stand united against hatred and intolerance.  That’s another reason why I’m so proud of the agreement that the U.S. Holocaust Memorial has signed with the Greek government to enable researchers to examine records of Nazi crimes in Greece from 1940 to 1945.

And this year, the U.S. Embassy is partnering with the Jewish Museum of Greece to support a special program on women in the Holocaust.  This is a program that will highlight the real stories of five women Holocaust survivors, and provide workshops and resources to educators and school children throughout Greece.

It’s up to us to keep the memory of the Holocaust alive, and to stand together against voices of hatred and intolerance that seek to undermine our democracies.

With that in mind, I’d like to close with a quote from Secretary of State Blinken who said that, “We remember that evil on a grand scale can and does happen, and we have a responsibility to do everything we can to stop it.”

Thank you very much, efcharisto poli.