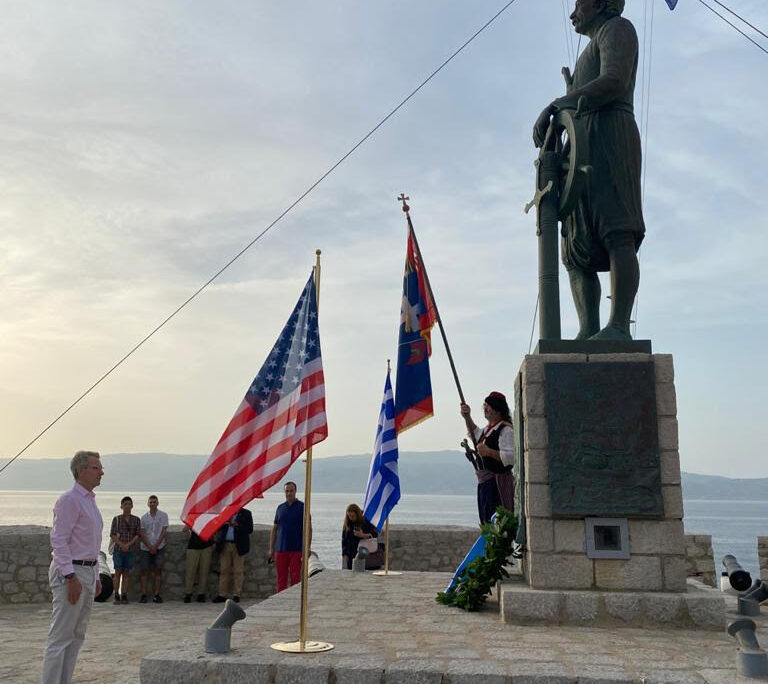 Mayor Koukoudákis, Vice Governor, friends, colleagues, it is a huge honor and a pleasure for me to join this special series of presentations to honor the American philhellenes who supported Greece in its fight for independence 200 years ago.

Thank you Mr. Mayor for the role you have played in helping to ensure that the remarkable history of Hydra remains at the center of Greece’s bicentennial, and we, the United States, get to play a small part in that story.

The contributions and the sacrifices of Hydriots – as individuals, families, and as a community – throughout the Greek struggle for independence were truly remarkable.

Two hundred years later, this island is rightly proud of the 150 ships, the formidable leadership and the immeasurable courage that your ancestors provided during the Greek fight for independence.

Mr. Mayor, congratulations also to you and all of the leadership of Hydra for successfully hosting the Miaoulia Festival this weekend – a very important symbol of Greece’s gradual return to normalcy from the global pandemic, but also a marvelous opportunity to mark 200 years of Greek independence just a few days before the American 4th of July independence holiday.  This successful festival speaks to your commitment to maintaining traditions and honoring one of Greece’s and this island’s most prominent citizens, Admiral Andreas Miaoulis.

It was for me an incredible, most magical moment to join the Army Band of the U.S. Army Europe and Africa, the Mayor, and other luminaries as the sun began to set over the Peloponnese this evening to post a wreath at his memorial.

I also want to convey again my appreciation to you and the Hydra Island Council for naming a street in memory of William Washington and George Jarvis, two American philhellenes who fought alongside the Greek people to help them reclaim their birthright of democracy and independence.

I’m grateful tonight to be joined by some true experts — Konstantínos Veléntzas, the Founder of the Society of Hellenism and Philhellenism; Chrístos Bartsókas, a collaborator of the U.S. Embassy over many years who also happens to be a member of the Society’s Advisory Committee; and Dr. Maria Georgopoulou, the Director of the Gennadius Library at the American School of Classical Studies in Athens.

Both Konstantinos and Maria have worked closely with the Embassy this year to launch exhibitions about the contributions of American philhellenes to the Greek Revolution.

The next time you’re in Athens, I would encourage everyone to visit both the new Museum of Philhellenism, particularly the third floor which focuses on American philhellenes, and the Gennadius Library special exhibit entitled, “The Free and the Brave: American Philhellenes and the Glorious Struggle of the Greeks.”

The Embassy is supporting both exhibits as part of our year-long campaign to commemorate the Greek bicentennial, but also to help educate Greeks and Americans about the ties that bind our two revolutions.

And I’ll share a small anecdote.  My friend George Xiradakis and I were speaking with a close friend and a very prominent Greek businessperson earlier this afternoon.  And even in her case, she was unaware of the history of George Jarvis and William Washington which reinforced in my mind the importance of the work we’re doing this year to recall these ties.

And we’re really grateful to Konstantinos, Christos, and Maria for travelling to Hydra for tonight’s event, in order to help us continue this educational mission.

I also want to acknowledge the American Embassy’s ongoing partnership with the Greece 2021 Committee and the really important work that the Committee is doing to educate all citizens about the importance and the symbolism of Greece’s bicentennial.

The Embassy’s bicentennial campaign is entitled, “USA and Greece: Celebrating 200 Years of Friendship.”  It’s designed to highlight the stories of brave American women and men who 200 years ago stood shoulder to shoulder with the Greek people.

American society has been enriched from its earliest days by our relationship with Greece and with the Greek people.  As we prepare to celebrate the 245th anniversary of American independence in just a few days’ time on July 4th, we’re also paying tribute to the ancient Athenian principles of democracy and rule of law that specifically inspired our founders as well as the far-reaching legacy of the philhellenism movement in the United States.

American support for Greek independence brought our young country together, increasing civic engagement, and leading Americans to deliver our country’s first foreign aid packages, some of which undoubtedly came to this harbor on this island.

This historic collaboration between our countries inspired the movement for liberty and equality in the United States that helped later lead to the success of the women’s suffrage and abolitionist movements, which forever changed American society for the better.

I’m very glad that tonight’s presentations will highlight further some of the brave and multi-talented American philhellenes who I’ve come to learn about in my exploration of Greece’s bicentennial.

Their names are memorialized on the monument to the American philhellenes constructed by colleagues of AHEPA outside my residence in Ampelokipoi.  Now, thanks to the vision of the Mayor and the Island Council, these individuals will be remembered, too, by future generations that walk through the port of Hydra.

Their stories demonstrate what American philhellenes knew well: that the foundation of our nations is uniquely intertwined, inspired by the same democratic ideals and values.

American philhellenes helped to strengthen the cooperation between our peoples and had an important impact on the early development of U.S.-Greece relations.

Newspapers in the United States called the outpouring of American sympathy and support for the Greek cause “The Greek Fire,” because it spread like wildfire throughout the country.

In the same way, the flame of democracy passed from ancient Athens to America, shaping our countries’ histories and our friendship and guiding us to where we are today.

I am very proud to say that the relationship between our countries today is at an all-time high.  And I am also confident that the flame that united and inspired our peoples two centuries ago will continue to bring our two nations together and light the way ahead as we continue to build and strengthen our remarkable alliance.

Efcharistó polí, and I look forward to the presentations.