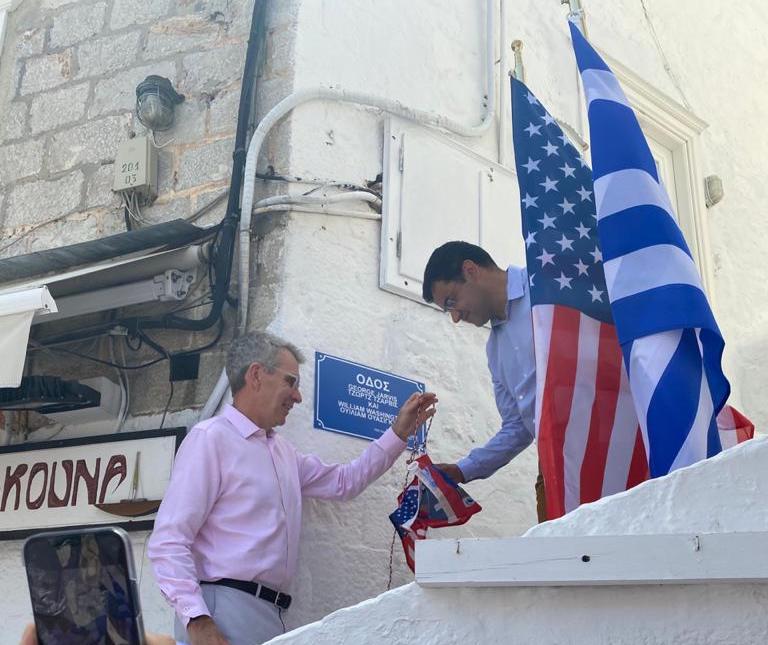 Thank you for welcoming us all today, but also for honoring our philhellenes in this way.

I want to start in particular by thanking the Municipal Council and the Council President for the Resolution which was passed.

I was on Hydra with my wife Mary about a year ago and the Mayor gave us a grand tour of the island and all of the history of the Greek War of Independence that was written on this small rock, and the enormous sacrifices of the community of Hydra for the cause of independence.  I was able to learn not only about the pivotal role that Hydra played, but also the real heroic support which was provided by young Americans who rallied to the cause of the Greek War of Independence.

So on this very special day for Hydra, but also for the United States, just a few days before our Fourth of July Independence holiday, I can’t think of any place better to be to celebrate the Greek bicentennial and the two hundred years of ties between our two countries.

I also want to say a very special thanks to the members of the U.S. Army Europe & Africa Band who have honored us by coming out here today, again demonstrating the strength of the ties between our two countries and our two armed forces.

I’ll have more to say about this this evening at the seminar, but I would just like to underline something that President Biden emphasized on the occasion of Greek Independence Day, which is the centrality of the democratic values that our two societies share in common.  There are many countries that contributed to the Greek Independence cause, many other great powers, but the United States was unique because our support for the Greek Revolution was founded not in great power politics, but in our shared democratic values.

So we had, as the Resolution of the Council describes, two American philhellenes William Washington and George Jarvis who came here to this island, who died in Greece in the cause of freedom. And I think it’s enormously significant that we are now able to commemorate this on the street.

I was talking to another American citizen, an American expat who lives here on Hydra, and she was asking what’s the story, why the street has been renamed.  I am very hopeful that many other people will come here, will walk down this street and they will learn the story of the American philhellenes, which is not well-known either in Greece or in the United States.

Two hundred years after William Washington and George Jarvis laid down their lives in the cause of Greek Independence, the ties between our countries are stronger than they’ve ever been.

I know that President Biden is deeply committed to further deepening that relationship and I am very proud that this small but historically important island plays a part in that story.

So Mr. Mayor thank you very much and thank you for honoring all of us.