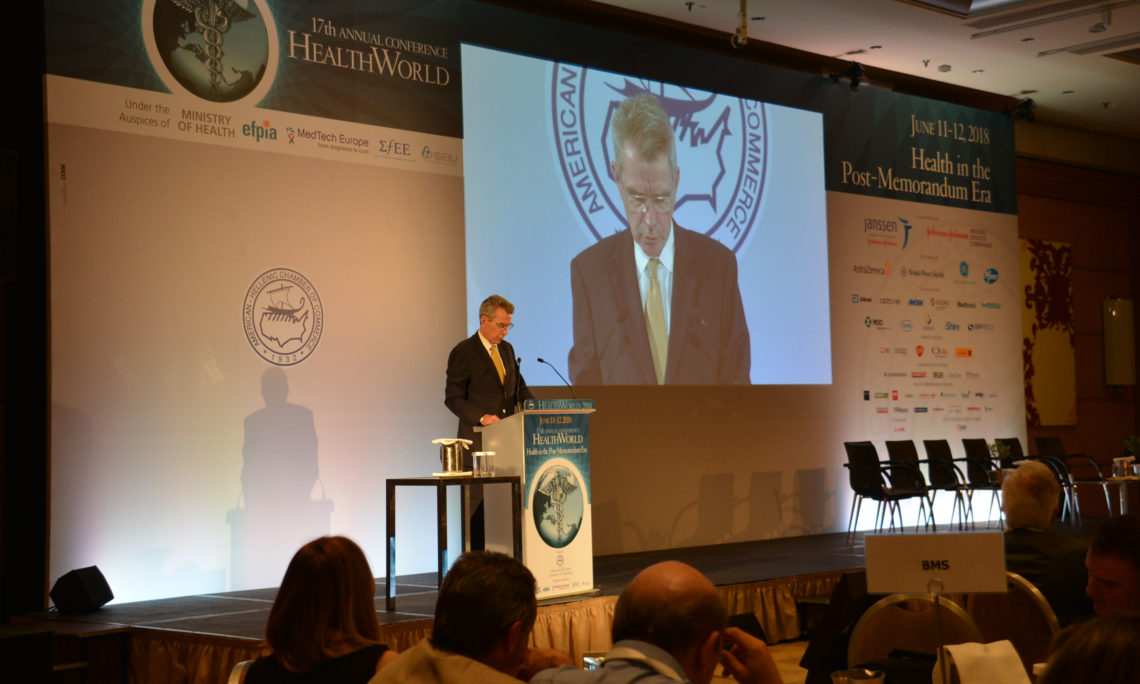 Καλημέρα. It’s a pleasure for me to be here at this year’s HealthWorld Conference, especially as this year’s topic, “Health in the Post-Memorandum Era” fits so well into the U.S. government’s strategy for Greece in 2018. As our top priority, we are working to strengthen and highlight our support for Greece’s emergence from the bailout in August, which will coincide, as Simos noted, with America’s participation as honored country at the Thessaloniki International Fair in September.

So I want to start by thanking our partners at the American – Hellenic Chamber of Commerce for organizing this conference, and for all their help this year in organizing the many events that have contributed to elevating the United States as the honored country at the Fair this year.

And I want to specifically recognize the contributions of the members of AmCham’s Pharmaceutical Committee and Medical Devices and Diagnostics Committee. Due to their efforts, working closely with senior executives of all member companies, HealthWorld has been a success over the past 17 years, and is a model of effective industry advocacy that transcends corporate rivalry.

I also want to point out that the vast majority of the American companies represented here are led in Greece by Greek citizens that count the Greek people as their most important shareholders. Their passion in putting together this event each year is driven in no small part by their collective desire to see the healthcare environment in Greece grow and prosper to deliver the most innovative and advanced healthcare to the citizens of the Hellenic Republic.

The next two days of the conference will bring together an impressive lineup of company executives, industry experts, and government representatives. This gathering of influential stakeholders will certainly help advance healthcare in Greece. More generally, the health sector can play an important role ensuring that Greece’s exit from the memoranda and return to world markets will succeed by being catalyst for research and innovation.

U.S. healthcare companies are perfectly positioned to help. They are globally regarded for their innovations and high tech products. Compared to several other industries including automotive, defense, and telecom, the medical device industry invests a higher percentage of yearly revenues into product innovation. This keeps the industry competitive, contributing to the constant innovation and improvement of existing technologies.

The U.S. biopharmaceutical sector added an estimated $1.2 trillion in economic output to our economy in 2014, representing 3.8 percent of the total U.S. output. More than 800,000 people work in the biopharmaceutical industry in the United States across a broad range of occupations, such as scientific research, technical support and manufacturing.

It is no coincidence that the United States has one of the most supportive domestic environments for the development and commercialization of pharmaceuticals with minimal market barriers, and U.S. companies seek similar partnerships here.

Another strength we see in the U.S. industry is an intellectual property system that rewards innovation through patent and data protection – a science-based regulatory system that is considered the most rigorous in the world.

American healthcare companies also have very high ethical standards for transparency that they are bound to comply with wherever they operate, including the Foreign Corrupt Practices Act, the Securities and Exchange Commission oversight (SEC), and internal Codes of Conduct and Ethics. In Greece, most of these companies have vibrant Corporate Social Responsibility programs that engage their employees in activities that have important and positive public health impacts.

And while the U.S. government is eager to see American companies succeed here, it is ultimately up to Greece itself to create the conditions that will attract and retain new investments. This is an important challenge in the post-memorandum era that I’ve been discussing with Deputy Prime Minister Dragasakis, but one that I believe can be achieved. So in this spirit, let me provide a few humble suggestions how based on what I have seen work elsewhere and from discussions I have had with the business community.

First, maintaining an open line of communication between the industry and the government is a critical avenue to ensure that key stakeholders in the health sector remain engaged in finding solutions to common problems here in Greece.

U.S. companies have a great deal of experience in other countries and in a variety of healthcare markets. They could be good partners, providing advice before decisions are made that might have any negative impact on the market. They could offer help in the effort to encourage increased investments in Greece’s healthcare sector and ensure that patients continue to have access to the most innovative and useful healthcare products.

I know that issues such as transparency in tenders; clawbacks and rebates; the price observatory list and problems related to outdated equipment loom large and are likely to be raised in discussions here over the next two days. I expect the future of healthcare will also include discussions of wearables, new drug delivery systems, e-health, big data, patient privacy and data security.

I would like to encourage constructive dialogue between the AmCham, U.S. healthcare companies here and the Government of Greece on these and any other topics. The best way to achieve positive results is to work together in a collaborative and competitive environment that ensures fairness and transparency.

The United States also seeks opportunities to deepen our economic relationships and connections with companies operating from Greece, that have an international profile. Last week, we had a great showing of U.S. businesses working with their Greek counterparts at Posidonia. Next week I will travel to New York with the AmCham and the Athens Stock Exchange and then to Washington, DC for this year’s SelectUSA Investment Summit and Greece roadshow alongside a delegation of Greek executives seeking to grow their businesses internationally through operations in the U.S. We welcome Greek health sector companies that want to expand globally through investments in the United States and through collaboration with American companies and research institutes.

And then, of course, in September, the United States will be the honored country at the Thessaloniki International Fair, immediately after Greece exits the memoranda in August. We have a very strong contingent of U.S. businesses committed to participating, a high-level political delegation to accompany them, and a series of cultural events that are ongoing both in Athens and Thessaloniki to celebrate our strong bilateral relations and provide real support for Greece’s economic recovery, with a focus on science, technology, and innovation. I know that several American companies are inclined to be there, and I encourage all of you to take a hard look at the opportunities at Thessaloniki 2018.

I hope I will see you all in Thessaloniki this September and thank you for your time this morning. I wish you continued success in improving healthcare for Greece’s economy and for its society.