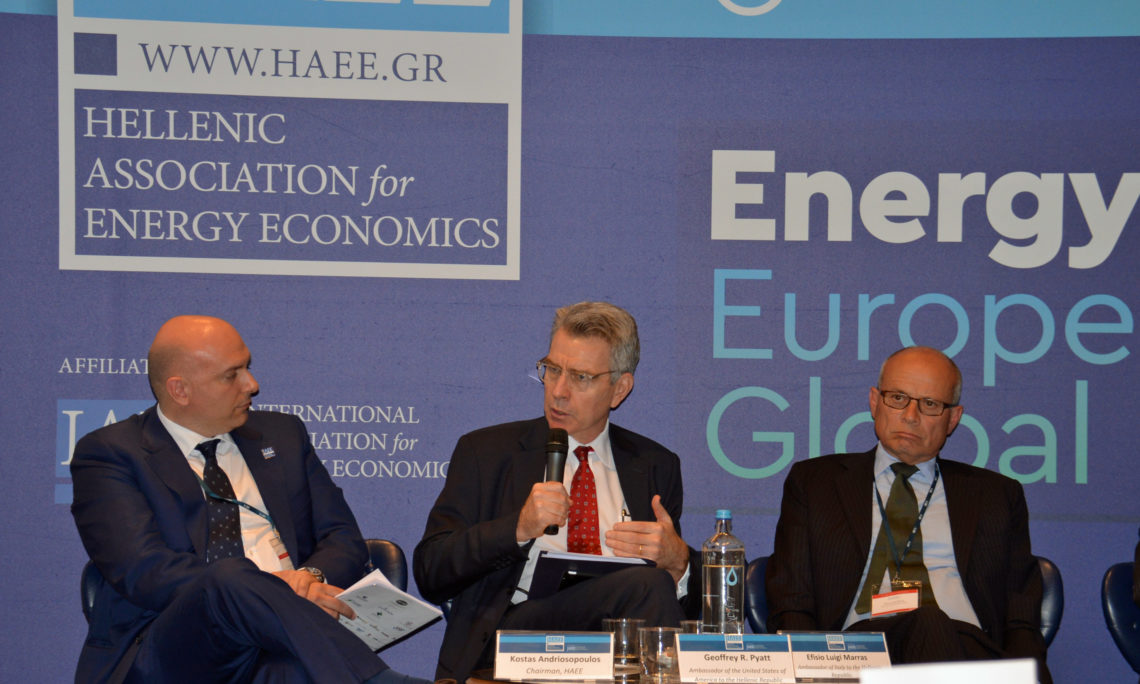 Thank you, Kostas, I’ll speak from the podium.  I get in less trouble that way.

Let me first say what a pleasure it is to have the opportunity to speak with some of my Ambassadorial colleagues who have been most deeply involved on issues of European energy security.

Since I arrived in Greece nearly two years ago, I’ve had many opportunities to speak about the importance of energy and energy security to the United States.  My team and I spend a lot of time on this issue because – as I think everybody in this room would agree: a steady, uninterruptible supply of energy is the foundation for economic growth and stability but also for political stability.

We also focus on this sector because energy is one of the most promising areas for attracting new investment to Greece that the country will need to sustain growth and leave the years of crisis behind. Energy, and Greece’s role as a European energy hub, is therefore a central part of the U.S. strategy to build up Greece as a pillar of regional stability.

It is because of these dynamics that the United States has taken such an intense interest in the energy security of our allies and partners here in Europe.

Our engagement on this issue reflects a long-standing U.S. policy that continues under the current U.S. Administration.  As our Assistant Secretary for European and Eurasian Affairs Wess Mitchell recently told the U.S. Congress, “The energy security of our allies is a fundamental U.S. national interest. When allies’ access to reliable and diversified energy is secure, they are less susceptible to pressure from outside powers.”

And that pressure is real.  Here in Europe we have seen time and again the use of energy as a tool to foment instability.  As our Assistant Secretary noted in his testimony to the U.S. Congress, “Russia has used its leverage over Europe’s energy as a political tool repeatedly.  One study found 55 instances of Russia using supply cutoffs for political purposes over a 14-year period.  Another study identified 41 examples in one year alone of Moscow linking political demands to energy deliveries.”

The energy mix in Greece, of course, already includes solar, wind, hydro, lignite, oil and natural gas.  Greece is also developing its own upstream potential, with companies from around Europe and the United States beginning to explore opportunities here, including the Spanish company Repsol which has cooperated with Energean – a Greek company with major U.S. investment.

The Revithoussa LNG terminal provides Greece with flexibility for importing natural gas from multiple sources into the local market.  A future terminal near Alexandroupoli would add to that resilience and is a high priority for the months ahead to complete financing and participation, hopefully including an American share. And the support that Greece has shown for the Trans-Adriatic Pipeline, which is now well under construction, further illustrates the country’s commitment to its own energy security, as well as that of its neighbors.  These projects are truly massive in scale and – I think – not fully appreciated by many who have not had the opportunity, as I have, to visit these sites and see them for yourselves.

Importation of LNG, including from the United States, can also play an important role in diversification of Greece’s and Europe’s energy supply. And that is why we were so pleased with Prime Minister Tsipras’ announcement in Washington last October that Greece intends to become the third EU importer of U.S. LNG.

The U.S. obviously wants to see our LNG exporters succeed, but we also believe, along with Greece, that the real winner will be the consumer, as the European gas market begins to experience true competition.  We are hopeful that Greece, as it continues to move forward with energy market liberalization, will see America as a reliable supplier and an investment partner.

The arrival of U.S. LNG to Poland, Lithuania, Italy, Spain, Portugal and Greece reflects the tectonic shift that is occurring in global gas markets as U.S. LNG surges into the international marketplace: a point that Luc’s presentation details much better than I could do.

To secure the maximum benefit that LNG offers to promoting diversification, the proper infrastructure is essential.  We anticipate that the privatization of DESFA, which the SNAM-led consortium recently won, will lead to further investment in the Greek system and create new opportunities for diversifying and strengthening resilience as Maria’s slides detailed.

Greece’s geostrategic importance has informed U.S. policy for many decades, and today it shapes our support, which we share with the European Union, for Greece’s emerging role as a European energy hub – an issue that featured prominently in Prime Minister Tsipras’ visit to Washington last October.

During that visit, President Trump expressed America’s appreciation for “Greek contributions to European energy security through its support of the Trans Adriatic Pipeline, the Greece-Bulgaria Interconnector, and LNG facilities that are capable of transporting diverse sources of energy to Europe, including potential LNG gas exports from the United States.”

President Trump further noted that “These initiatives make both our people safer and create good jobs for our hardworking citizens.”

Of course, none of these efforts are meant to exclude any specific supplier of gas from the European market.  Doing so is neither possible, nor desirable. The problem occurs when one country’s leaders view energy exports not as a matter of supply and demand, but as an extension of politics by other means.

Moscow is now working to construct two new pipelines– Nordstream II and a multiline Turkish Stream, which, if completed, would bypass Ukraine as a transit country, heighten the vulnerability of Poland and the Balkans, and deepen European dependence on the Russian gas monopoly.  None of these outcomes are desirable.

These large pipeline projects are, in essence, the opposite of using energy as a stabilization catalyst.  Instead, they give Russia new leverage over Europe – leverage which it has already demonstrated a willingness to use in the weaponization of energy.

We have seen a growing acknowledgment in the capitals of Europe, including importantly in Berlin, that Nordstream II is a political project.  We will continue to work with our European partners to encourage the European Union to abide by its own commitments to diversification under instruments like the third energy package.

By working together, we can help ensure Europe’s energy security and remove the risk that energy could again be used as a weapon or political tool. And for the United States, as we seek to support this European energy security agenda – Greece is an absolutely essential partner. Thank you very much.  Ευχαριστώ πολύ.