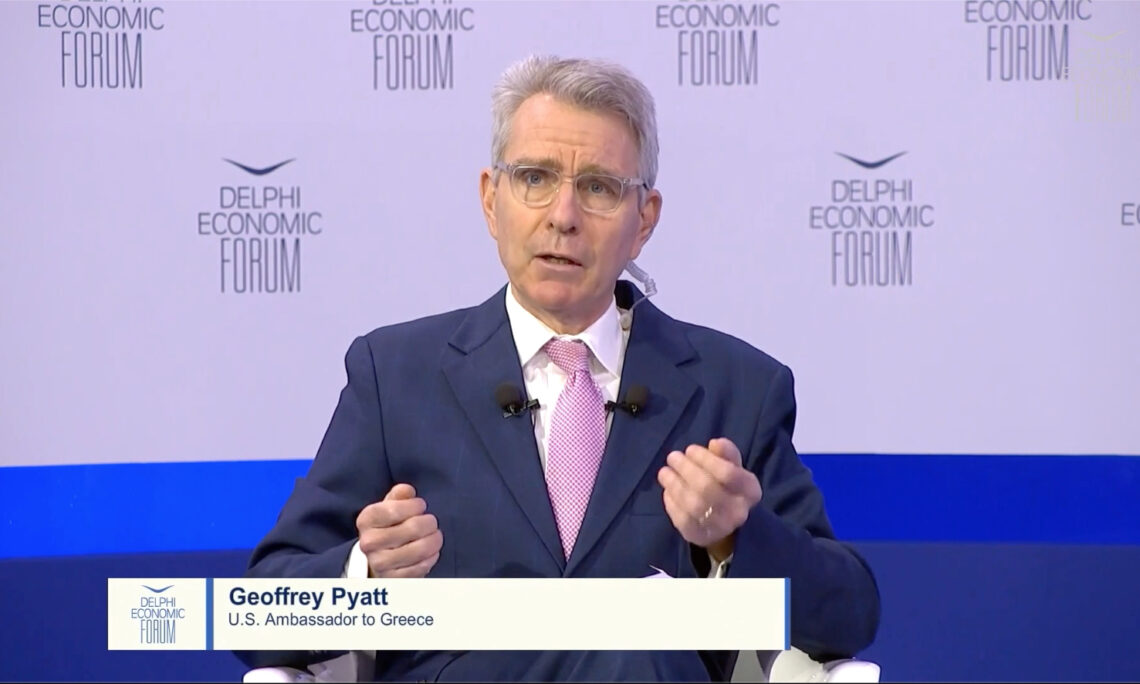 
Thank you very much, Katerina.  Let me start by saying a huge thank you to you and Symeon and the Delphi team for putting together this special event as part of this bicentennial year of the Delphi Economic Forum.  Katerina is a longstanding partner of the U.S. Embassy.  We greatly value her current role at the Atlantic Council as a Nonresident Senior Fellow, and the work we’ve been able to do together to help build a stronger and more dynamic U.S.-Greece relationship.

But this is a really special event because Katerina has pulled together a group of friends to offer a really impressive set of conversations about the legacy of the Greek Revolution and the unique ties between the American Revolution and the Greek Revolution.  This is part of a year-long campaign that we have undertaken here at the American Embassy in Athens to commemorate the Greek bicentennial and the 200 years of friendship between our two countries.

I also want to acknowledge in this context the very valuable partnership that we have built with the Greece 2021 Committee and the really important work that the Committee is doing under Gianna Angelopoulos to help educate Greek citizens about the importance and the symbolism of this bicentennial.

I’ve said before that I can still remember what it was like to be in the United States in 1976 when we celebrated our bicentennial.  And I’m very hopeful that Greece will have some of the same emotion around this important celebration.

We’re using our commemoration, which we call “USA and Greece: Celebrating 200 Years of Friendship,” to share some of the stories of the brave American women and men who 200 years ago stood up to support the Greek freedom fighters and their struggle for the same values that our founders held high: democracy, independence, self-determination.

American society has truly been enriched from its earliest days by our relationship with Greece and the Greek people.

And Katerina’s research has helped to illuminate the legacy of the philhellene movement in the United States.  It touches on so many aspects of what defines our international personality: the tradition of civic engagement, which in many ways began with the philhellenic committees in cities like New York and Philadelphia and Washington DC.  Some of the first foreign assistance that the United States provided internationally was in the form of shiploads of medical and food relief that came from the east coast of the United States to help the struggling Greek independence fighters.  And the legacy of the philhellenes helped to drive a narrative of liberty and equality that eventually led to the women’s suffrage movement and the abolitionist movement in the United States, forever changing the fabric of American democracy and American society.

I hope very much that this seminar this afternoon and the online report that Katerina will put together out of it will help to highlight some of the lesser known figures who have been so important to the early days of our relationship.  People like James Williams, an African American seafarer from Baltimore, who fought in the battle of the Gulf of Lepanto to help liberate the Greek people.  Or philanthropists like Emma Willard, who established schools in Greece to educate Greek women, directly leading to the legacy that we celebrate today with flagship American educational institutions like the American College of Greece, Anatolia College, and the American Farm School in Thessaloniki.

These are stories which demonstrate what the American philhellenes knew well: that the foundation of our societies and our democracies is uniquely intertwined, inspired by the same democratic ideals and values.  But also the reality that democracy is an ongoing project, and that a commitment to our democracies compliments our democratic values at home.

In this regard, the U.S. role in the Greek Revolution is unique.  Unlike the great powers of the day, who fought against the Ottomans to support the Greek independence movement for reasons of great power politics, our involvement was founded on values, our shared democratic commitment, and our founders’ attachment to the ideals of Athenian democracy.  American philhellenes, from the first days of the Greek republic, helped to strengthen cooperation between our peoples and had an important impact on the early development of U.S.-Greece relations, which is carried on today through our robust people-to-people ties, which are so important to shaping the fabric of our relations.

Early American newspapers, as Katerina alluded to, called our support for the Greek freedom fighters “Greek Fire,” because it was spreading like wildfire throughout the United States in the same way that the flame of democracy spread from ancient Athens to the United States.

I’m proud to say today that the relationship between our countries is at an all-time high.  As President Biden remarked recently, we have rich and important economic, business, and defense ties, but what really binds us are our values.  And the relationship between the United States and Greece is going to continue to be defined by those shared values and a president who has made it his commitment to see that U.S.-Greece relations in the years ahead are closer than they have ever been.

So we are very excited about this celebration of the Greek bicentennial.  I’m very proud of the Embassy’s support for this project that Katerina has led on, and I’m very much looking forward to the panel discussion this afternoon.