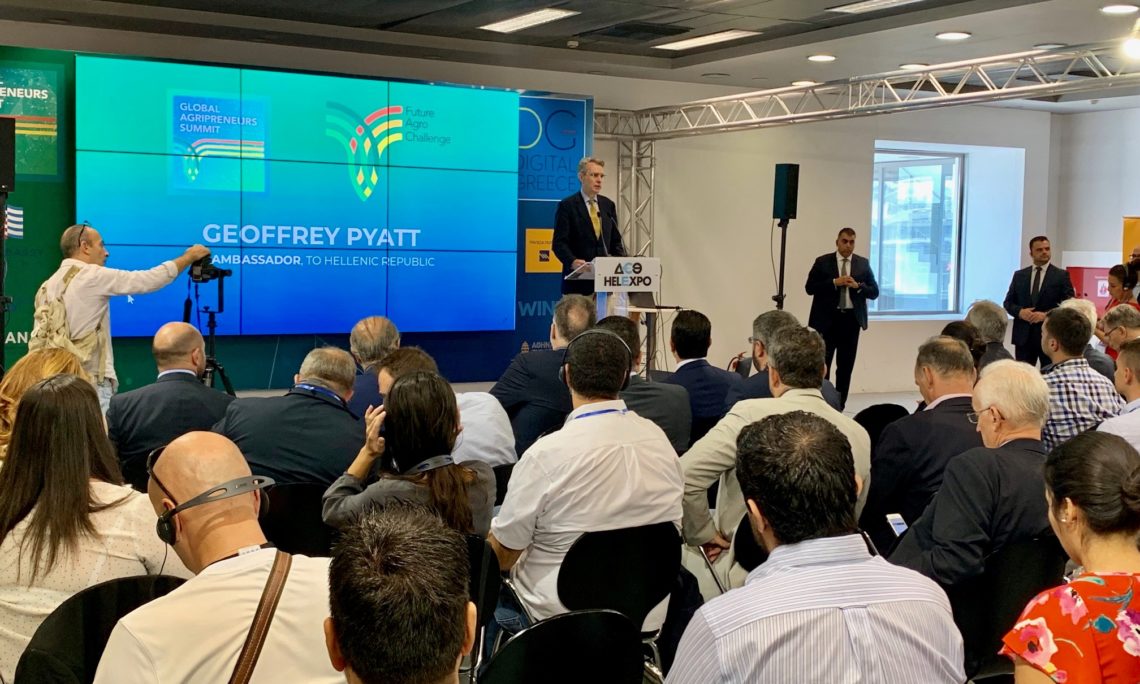 Ambassador Pyatt:  Καλημέρα! Let me start by thanking Minister Voridis for being with us here today, for being such a good friend and such a great champion of the agricultural relationship between the United States and Greece.

As I walked through the pavilion this morning with the Minister, I couldn’t help but be reminded of the similarities between what we see here and this region of Greece in particular, the agricultural heartland of the Hellenic Republic and my home state of California which, aside from having Hollywood and Silicon Valley and the beach, is also the biggest agricultural producer in the United States.

It’s been also a special pleasure to be here with Michalis and Carla and our partners from Industry Disruptors.  It’s really an honor for us to be working together to support this fourth Agripreneurs Summit here in Thessaloniki as part of our renewed presence at the Thessaloniki Fair.  But also to be supporting the programs in Pavilion 12.  And like Michalis I would encourage everybody to see what’s happening over there as well.  I’ll be with Minister Pierrakakis in just a couple of minutes highlighting that aspect of our cooperation as well.

I think it’s especially timely that we’re looking at these issues this fall in the context of a new Greek government, a new Greece which is so strongly committed to empowering entrepreneurship and helping to create opportunities, especially for Greek young people who have so much energy, so many entrepreneurial ideas.  And as I said to the Minister, are not looking for anybody else to do the work, but simply looking for signals to go for it.  To move forward.

I’m absolutely convinced that Greece will be successful in this context.  I’ve seen over the past three years so many inspiring examples of Greek startup culture and entrepreneurial energy, and a lot of those, not surprisingly, are in the agricultural sector.  In that regard I’m really glad that we have our partners here today from the American Farm School, Panos and the team there.  Also from the Farm School and Stavros Niarchos Foundation supported project, New Agriculture for a New Generation which the embassy has been proud to work with from the beginning.

I’ve seen a couple of companies here this morning that I have already learned about through our partnerships with Orange Grove.  Through projects like the Trophy Challenge, the startup competition that we helped support in July in conjunction with our partners from Rutgers.

I certainly wish Καλή Επιτυχία to all of the winners from that project as they compete now for Agripreneur of the Year.

I want to close by underlining the commitment of the U.S. embassy, the U.S. government, to our engagement especially here in the region of northern Greece, Macedonia, Eastern Macedonia and Thrace, which has so much of Greek agriculture.

I learned this morning that Minister Voridis, aside from everything else he does, is an apple grower, and I’m especially pleased to learn that one of the companies which is pitching as part of this competition, Map My Apple, is a San Francisco-based startup, and I was encouraging them to make their pitch to the Minister.

But it’s really, just one tiny example of this nexus between what we all know of the Mediterranean diet, Greek food, one of the best-selling points of this country.  And the new economy empowered by technology that is going to be so important to shaping the future of the global economy and the world we live in.