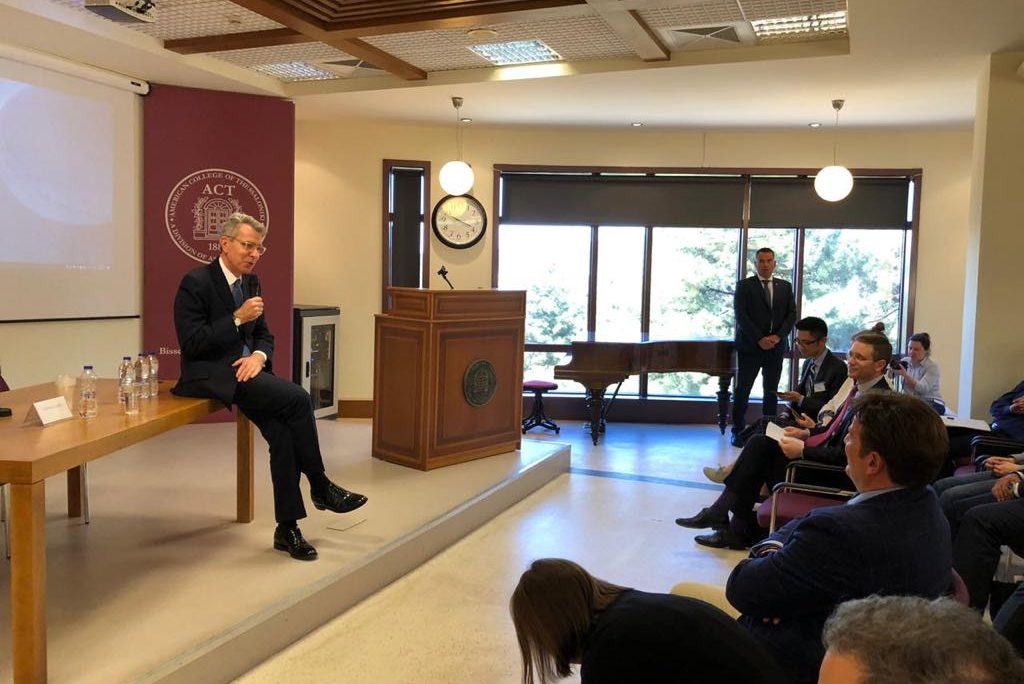 Good afternoon, everyone, or as we say in Greece, Καλησπέρα σας! It’s a really great pleasure to be with you here in Thessaloniki and I’m excited about this first-ever Gilman Scholar Regional Summit. I know you’ve all had a packed schedule over the past couple of days and met with many gifted Greek and American entrepreneurs, scholars, and artists who, like you, have benefited from studying or working abroad.

I want to thank Artemis and the whole team for co-organizing the summit along with our Consulate General as well as Assistant Secretary of State Marie Royce, Jennifer Lawson, and the Bureau of Educational and Cultural Affairs for all their guidance and support. And also I want to say a special thank you, to my friend Panos Vlachos and his whole team at Anatolia for hosting us today. Anatolia is one of the hidden gems of the U.S.-Greece relationship, and I’m very happy to be back on campus today.

Thessaloniki is a city very close to my heart, one with strong American ties. Greece and especially Thessaloniki form a bridge between East and West, and for centuries, people from Asia Minor, from the Black Sea, and most recently, refugees from the Middle East have migrated through here.

I was reminded on that crossroads role today as I traveled to Serres and Drama driving much of the time just a few minutes away from the Bulgarian border.

And that bridging role is only going to grow in the years ahead as this region becomes even more networked with the new infrastructure like the Trans Adriatic Pipeline.

As our two governments emphasized during the inaugural of U.S.-Greece Strategic Dialogue in Washington this December, Greece is an important US partner and a pillar of regional stability. That’s why we came out in force when the United States was recognized as the Honored Country at the Thessaloniki International Fair last September, bringing 55 top-tier American companies representing trillions of dollars in capital to highlight US innovation and technology.

And in so doing we built a very strong history of America’s presence and partnership in northern Greece.  American institutions like Anatolia and the American Farm School have a long promoted and strengthened ties between Greek and American people.

Every year, for example, a group of freshmen from Northeastern University spend their first semester of college here at Anatolia. For many of these American students, this is their first experience abroad, and they learn to adjust to university-level classes at the same time as they’re learning what it’s like to live abroad, to study a foreign language, and to explore the many treasures of northern Greece.

The Anatolia program highlights the foundational importance of experience abroad no matter what major you’re pursuing.

I always tell young people who ask for career advise that the most important single advise you can have going into a globalized job market is experience overseas. So congratulations to all of you having that advantage going ahead. And America is doing a lot more here in Northern Greece.

Across town at the American Farm School, the very impressive program called “New Agriculture for a New Generation” trains young people across Greece in the latest farming techniques and technologies while encouraging cooperation and innovation in the agro-food and alternative tourism sectors.  They are so important in Greek economy.

That program, led by Rutgers University in partnership with the Greek agricultural schools and supported by the Stavros Niarchos Foundation, is another great example of collaboration between the United States and Greece and how American strengths in modern agriculture and youth education can help to recharge the Greek economy. And I was delighted to learn from the Vice Governor who I met today in Serres from the American Farm School will participate in a major aggrotech conference in Serres later this year.

Finally, at Aristotle University, the Department of American Literature and Culture has hosted many of our Fulbright Fellows and created partnerships with American universities like Stockton and Salem State to bring students to Thessaloniki for cultural and academic exchanges.

In this regard I want to recognize Dr. Tatiani Rapatzikou, a dedicated professor in the department, whom you met yesterday. In 2009, Tatiani was a Fulbright Visiting Scholar at MIT, and since then, she’s worked tirelessly with the Consulate General to organize conferences, training events, and opportunities for her students to collaborate with students in the United States. And Rector Mitkas and I have agreed to work together on an ambitious program of further cooperation which I very much hope that the authorities in Athens will support.

Meanwhile, Technopolis, the technology park some of you have just visited, is poised to become a little Silicon Valley of the Balkans. The last time I was in Thessaloniki, I was blown away by the number of patents they had accumulated and by the professionalism of their presentation, which was just like a powerpoint you would see by a research group in California.

These US-Greek partnerships resonate with key themes of my personal life.

I’m from San Diego, a southern Californian city strongly marked by its high-tech industry and cross border linkages. I graduated from university in 1985, traveled to graduate school at Yale, where I barely survived my first real winter with snow and cold. And joined the diplomatic service in 1989, the year that Berlin wall came down, marking the End of Cold War and a Europe transformed.

So from the beginning of my career, I saw how important it is to know the world, to understand how we’re all connected and how rapidly the global economy is changing. As technology brings us closer together, as services and industries are transformed by artificial intelligence and ubiquitous data and as hundreds of millions of people enter the global economy, being able to look outward and understand what’s happening in other parts of the world becomes increasingly vital.

I’m sure you appreciate many of the benefits from your time in the Gilman program, even over just the past two days: the opportunity to explore new parts of the world, to forge and build networks like those with hospitable citizens here in Thessaloniki, and to explore cultural opportunities of this fantastic region of Macedonia. And I expect your visits to Deloitte and Veltio have given you a sense of how much companies value candidates with international experience.

I hope you’ll think of this experience five or ten years down the road when I say that your Gilman Scholarship will continue to pay dividends throughout your careers. You never know where your experience abroad will lead you, but you can be sure it will change you, and will change the way you look at the world.

Just ask Steven Tagle, who joined the Embassy last week as my new speechwriter. Steven, a native Californian like myself, came to Greece for the first time three years ago on a Fulbright Fellowship to study Greek mythology. Little did he know that he’d fall in love with this country and find a job here with help from the many Greek and American friends he made during his grant period!

Educational exchange programs like the Gilman Scholarship and the Fulbright Program are vital elements of our partnerships around the world. They nurture the people-to-people ties that bind our countries together and form the foundation of the strong, strategic partnership that U.S. enjoy with Greece.  The Fulbright Program is recognized as the premier international education program in the world, and the Fulbright Foundation in Greece, the oldest in Europe, just celebrated its 70th anniversary.

Since its inception in 2001, 28,000 Gilman Scholars from 1,324 US institutions have acted as American ambassadors in 149 countries, promoting our ideals and values while forming life-long friendships across borders and seas.

The State Department works through public diplomacy programs like these to create meaningful relationships that have lasting impacts. And while government leaders get most of the credit for the strength of our international relationships, we couldn’t do it without you. You young Americans are our future leaders, key to building a more prosperous future and a more peaceful and united world.

So in that spirit, now I’d like to give you the floor. What would you like to talk about? What questions do you have for me?