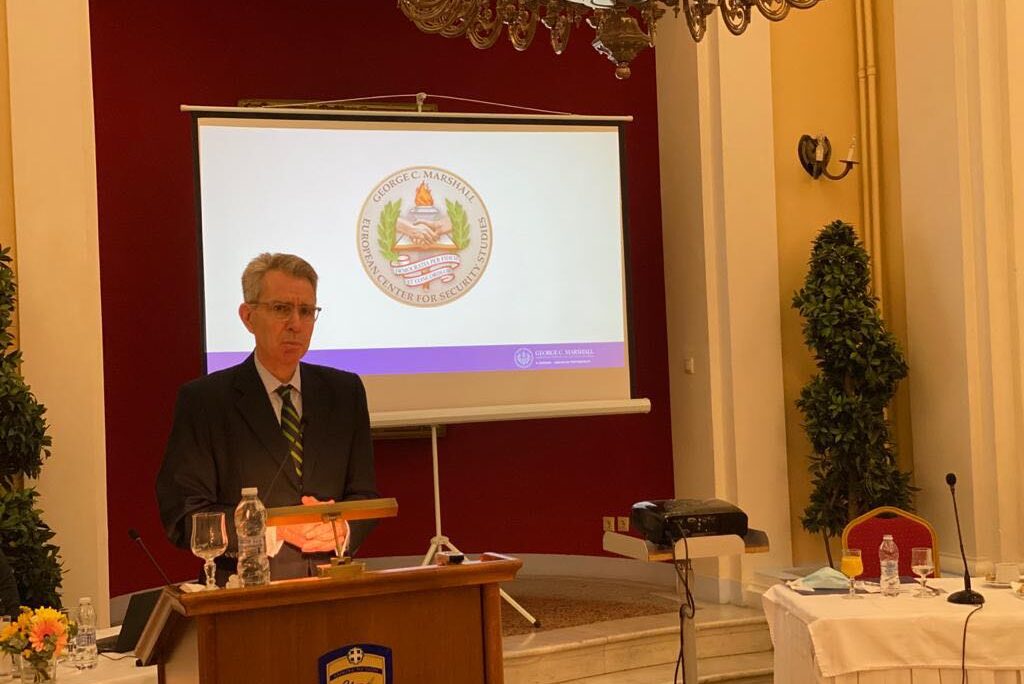 Good morning everybody.  Colleagues, friends, I want to start by thanking the George C. Marshall Center, along with our great partners at ELIAMEP, for organizing today’s seminar as an in-person follow-up to the excellent virtual event we held back in March.

Since we last met, the global pandemic has only accelerated great power competition.  If there’s one idea that I can leave with you today it is to reinforce that Russia and the People’s Republic of China are two global actors with a very different view of how the international system should be organized.  We are in the opening phases of what will be a generational competition.  One of the biggest challenges that we face in that competition is how to join forces with friends and allies in the region to encourage Moscow and Beijing to respect the rules-based, international order that has built prosperity and peace for all of our countries.  We must ensure that our democracies prevail in this global contest.

Here in Greece and worldwide, Russia continues to spread misinformation and sow discord inside our democracies.  Russia’s growing military presence in the Eastern Mediterranean, from bases in Syria to Wagner mercenaries in Libya, is profoundly destabilizing.  We also oppose Russia’s attempts to foment instability by breaking the unity of the Orthodox Church and manipulating energy resources to extract political concessions.  Russia also continues actively to support the authoritarian Lukashenka regime in Belarus, which has brutally cracked down on dissent in the wake of last year’s disputed election, including the hijacking of the Ryanair flight from Athens to Vilnius in order to arrest opposition blogger Raman Pratasevich.

The United States shares the EU’s concerns regarding Russia’s deepening authoritarianism and will continue to raise concerns about Russian human rights abuses and crackdowns on religious minorities, independent civil society, and media.  Then there’s cyber.  In April, the Biden-Harris administration imposed extensive new sanctions on Russia in response to the sophisticated “SolarWinds” cyber-attack which penetrated American government agencies and corporations, as well as governments and businesses in the EU and NATO, including here in Greece.

Over the longer horizon, we face the challenge of PRC propaganda and disinformation campaigns in the Eastern Mediterranean as the Chinese government works to control Eurasian trade and transportation routes through its Belt and Road Initiative.  China has demonstrated that it is willing to do whatever it takes to gain a technological edge, including the theft of intellectual property, engaging in industrial espionage, and forcing technology transfer.  Most recently, in July, the U.S., EU, UK, and NATO exposed the PRC government’s malicious cyber activities aimed at undermining American and European economic and national security.  The specific attack targeted Microsoft Exchange servers, affecting at least 30,000 organizations globally.

Finally, both Russia and China have exploited the pandemic to weaponize misinformation and sow confusion and division in Euro-Atlantic institutions.  Last month, Facebook removed hundreds of accounts peddling Russian-aligned disinformation about COVID-19 vaccines, including false claims linking the Biden-Harris administration to the idea of forced inoculations.

On the Eastern Mediterranean front of this global competition, Greece has emerged as a critical American ally.  American and Greek perspectives in this region are more aligned than they have ever been.  Our countries share a common interest in building peace, stability, and prosperity in the Eastern Mediterranean, Western Balkans and beyond.  U.S.-Greece defense and security ties are growing stronger every day.  We fully agree on issues of energy and climate change.  And Greece’s proactive foreign policy agenda is building a network of regional cooperation that helps to advance our shared strategic goals.

The geopolitics of this region have shifted dramatically as a result of Greece’s systematic effort over successive governments to build new relations with Israel and with Cyprus, as well as with other key players in the Eastern Mediterranean and the Middle East, including Lebanon, the UAE, Jordan, Egypt, Libya, and India.  This new geography of Greek foreign policy is changing dynamics around the region and opening new avenues for collaboration, especially in regional clean energy connectivity, security, and counterterrorism cooperation.

Meanwhile, to the north of Greece, it’s impossible to overstate the importance of the Prespes Agreement, which has unlocked Greece’s relationship with North Macedonia and thereby all of the Western Balkans.  We strongly support Greece’s leadership of efforts in the Western Balkans to break the Gazprom monopoly in Central Europe and eventually, I hope, in Ukraine.  We believe that the complex of projects around Alexandroupoli—the Alexandroupoli Floating Regasification Unit and the IGB pipeline connecting to the TAP pipeline—can play a key role here.  Unlike Nord Stream II, for example, these projects diversify sources and routes and undermine Russia’s ability to use energy as a geopolitical tool.

The United States strongly supports this more dynamic Greek foreign policy, and through two U.S. administrations we have bolstered the 3+1 cooperation framework with Greece, Israel, Cyprus, and the United States, which has been a signature element of this new geography.  Similarly, we’ve made good progress over the past few years involving Greece in our Three Seas Initiative.  We see this as another opportunity to strengthen the North-South connectivity from the Black Sea to the Aegean.

The U.S. Congress, too, has supported these efforts.  The East Med Act of 2019 provided a Congressional framework for U.S. support and engagement with the 3+1.  And Senator Menendez made clear during his visit to Athens and Cyprus recently that we will continue to build connectivity with our three close democratic partners in the region to address emerging challenges.  Congress has also expanded the mandate of the U.S. International Development Finance Corporation in order to finance and facilitate investments by American companies in Greece.  This expanded mandate was specifically designed to provide a positive agenda as a response to the checkbook diplomacy that the PRC has pursued through its Belt and Road Initiative.

Finally, the expansion and deepening of the U.S.-Greece Mutual Defense Cooperation Agreement has opened additional locations and facilities in Greece to U.S. military presence.  We’ve expanded our footprint at Souda Bay for the first time since the Cold War, and in northern Greece, the Port of Alexandroupoli has become a critically important logistics hub for U.S. Army Europe and Africa and for NATO.  Over the spring and summer, our forces used both rail and commercial line-haul to project military power and resources into the Eastern Europe and the Black Sea regions and will continue the same this coming year with the arrival of our U.S. Army Combat Aviation Brigade and the Defender 22 exercise.

All of these developments emphasize the importance of continued cooperation among our like-minded liberal democracies.  I’m proud to say that the Biden-Harris administration is deeply committed to our transatlantic relationship and the democratic values born here in Athens.  I know that Greece and the Greek government share this strong transatlantic instinct.  Because of the new collaborative relationships I’ve discussed, Greece is uniquely positioned as a NATO ally serving as a source of solutions across 270 degrees of the Eastern Mediterranean at a moment when the United States depends on our friends and allies in the region more than ever before.

I look forward to today’s presentations and hope to hear some spirited discussions during the Q&A period.  Thank you very much.