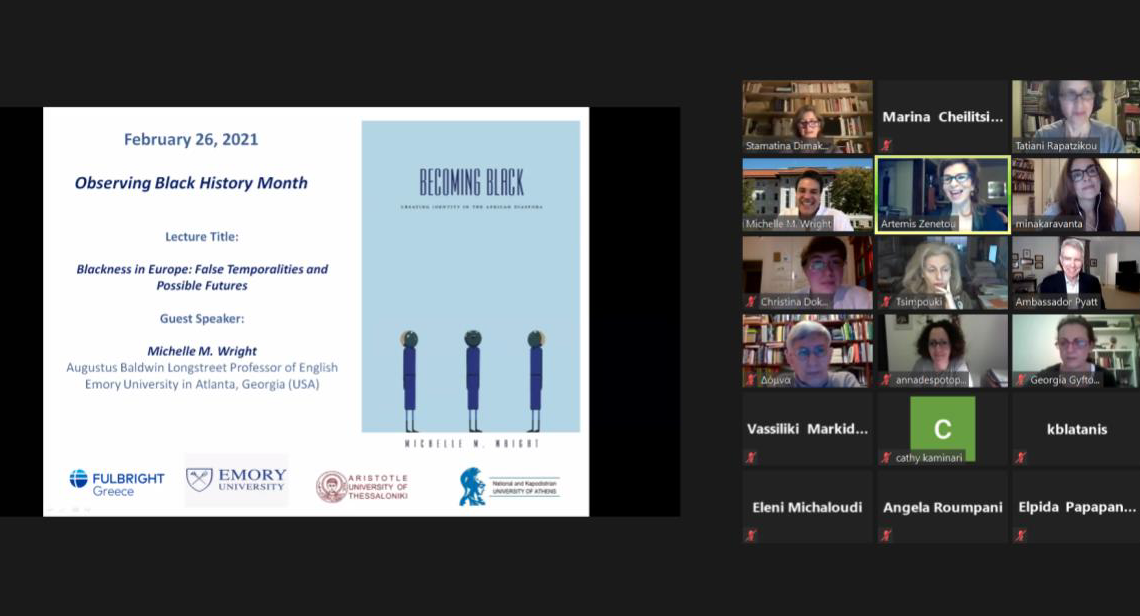 Thank you, Artemis, and καλησπέρα everybody.  Good evening.  Let me say what a huge pleasure it is for me to be part of the opening of this event, and I want to give a special shoutout and thank you to Artemis and the whole team at Fulbright for organizing this discussion in a way that puts a really positive spotlight on Black History Month.

I had the opportunity yesterday to participate in two events that reminded me how important this is.  One was a terrific panel discussion led by Minister of Education Kerameus and the team at IIE in New York.  I know that Professor Rapatzikou was on that Zoom discussion as well.  But it was a fantastically impressive conversation about all of the partnerships that have emerged over the past year or so between Greek institutions and counterpart institutions in the United States, and Professor Wright, I don’t know what at this point Emory does with Greece, but I’m not going to let you get off this evening without at least promising that you’ll be in touch with Cindy and our Public Affairs team about what we’ve been doing to build these bridges between American educational institutions and their Greek counterparts.  And it’s really impressive for me to see how much progress is happening on that initiative, which we launched literally weeks before the pandemic struck, so everything that we’ve done over the past year has had to be virtual, and I cannot speak too highly of all the work that Minister Kerameus has done.

The other event was kind of fun.  I had the opportunity with Cindy to sit down with Yorgos Karamichos, and because I’m not really good on popular culture, I didn’t know that Yorgos is one of the stars of The Durrells in Corfu, and is a Hollywood actor.  He spends part of his time here in Greece and part in the United States.  He is in Hollywood movies.  He’s also a director and a producer, and we’re working with him on a new cultural project.  But what was really inspiring to me was, I asked Yorgos about what his live is like in Los Angeles and how he ended up making it big in Hollywood, and he immediately turned to the life-changing impact of his Fulbright experience.  And it was just a terrific illustration of what Artemis does and how valuable it is.

I also want to say a special thank you to Professor Wright for joining us.  I, too, am really looking forward to the presentation, and I’m delighted that we’ve got this partnership with the University of Athens and Aristotle University.  I have a special warm spot for Emory University.  I haven’t been there in many decades.  I would welcome the opportunity to get back, but what I remember was, it was just about this time of year, late February, when I travelled from Washington D.C. down to Emory.  Washington was still in winter; at Emory, the dogwoods were blooming, the trees were saying it was springtime, and I hope you’re at least getting to that stage now.  It’s a beautiful campus, and a real treasure of American academic institutions.  But I also enjoyed reading that Professor Wright is the daughter of an American diplomat, and I want to read to you from her biography because I was so struck when I read that as a youngster, she lived in Rome, in Florence, in Rabat, the Hague, in Waterloo, Belgium before moving to the United States in 1982 at the age of 13.  It reminded me of my son, whose entire educational experience took place in India, in Pakistan, in Hong Kong, and Vienna, Austria, before he moved back to the United States as an 18-year-old to start as a freshman in upstate New York.  So I know what you went through, and I know what a sort of special background it gives you, so congratulations on that.

2021 is a really special year, for both Fulbright and for Greece.  Its the 75th anniversary of Fulbright, the oldest Fulbright program in Europe and the second oldest in the world.  And I will point out, Artemis, that I’m now on track to celebrate both Fulbright’s 70th Anniversary in Greece and it’s 75th, so top that!  And of course, we’ve very proud of the fact that since its foundation in Greece, Fulbright Greece has awarded nearly 6,000 scholarships, so it is a fantastic force multiplier in terms of our people-to-people relationship.

2021 is also the year, however, of the Greek bicentennial, the bicentennial of Greek independence, and we in the Embassy are working very hard on this, using it as an opportunity to celebrate the shared democratic values that unite our countries, the way in which our founders took inspiration from classical Athens, and the processes and values of Athenian democracy, and then the way in which  American Philhellenes in our young country rallied behind the Greek independence struggle 45 years later.

One of the things I’ve really loved about this effort is all the stories I’ve gotten to learn in the course of investigating these American Philhellenes.  One of the things you’re reminded of when you do that is that the word “polymath” does not go far enough to describe what these people are like.  A typical American Philhellene would have a biography that says, “poet, medical doctor, geologist, and painter,” and so it’s really been fun to learn about these individuals and how they came to Greece often times as young men, and in a few cases at great personal sacrifice because they truly believed in the importance of the Greek democratic model.

And since it’s Black History Month, I want to share the story of another American Philhellene whose story I’ve recently learned.  His name was James Williams, he was an African American seaman from Baltimore who reportedly “conducted himself with great coolness and intrepidity”—I love the language of that period–in the battle of the Gulf of Lepanto.

Williams, in all likelihood was likely born into slavery, and he certainly fought bravely to help liberate the Greek people.  And like many American Philhellenes, I’m certain that he was inspired by the belief that freedom is an inalienable right, exactly the same principle that led many of these American Philhellenes after they got done with their adventure in Greece, to join the abolitionist movement in the United States, and this includes one of the most famous, Samuel Gridley Howe of Boston, who made his name fighting on the island of Aegina and then returned to Boston to lead the abolitionist movement.

But Williams’ story is also a reminder that our democracy, like Greece’s democracy, is a constant work in progress.  For 245 years, the American people have tried to move our nation closer to the founding ideals that we inherited from ancient Athens, striving to create a more perfect Union that builds on the promise of “life, liberty, and the pursuit of happiness” for all.  And it’s up to all of us to engage in the fight for racial equality that is so much a part of that.  We have to have difficult conversations, and we have to renew our commitment to social justice and inclusivity.  I want to note also that at the State Department, we have our own work to do focusing on black diplomats like Professor Wright’s parent, who have represented the United States abroad over many, many years.

So in this regard, I want to thank Fulbright and Artemis in particular for giving us all an opportunity to focus on these issues, to talk a little bit about the work of perfecting democracy that we’re doing in the United States, but also what Greece represents in that regard, and with that, I’ll turn the floor back to the organizers and really look forward to hearing the discussion.  And again, thank you, Professor Wright, for joining us, and thanks Artemis for being such a valued partner for the Embassy.