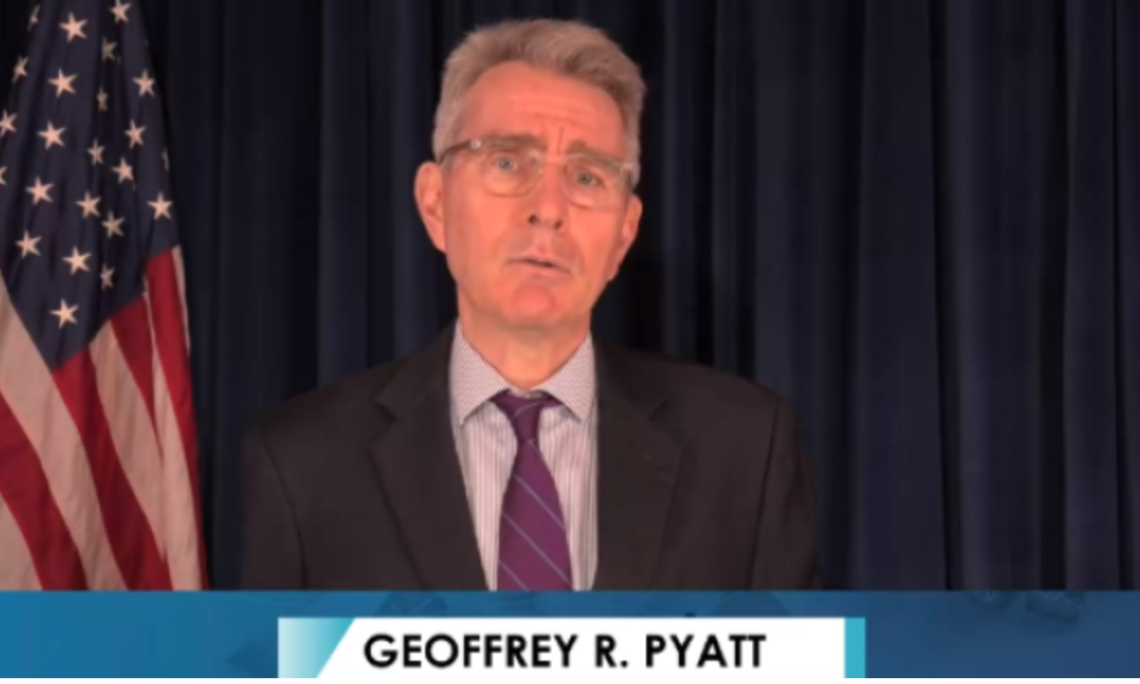 Καλησπέρα.  I want to thank Active Media Group and the Sports Management Society of Deree College for inviting me to speak at this conference.

Our Embassy has a long history of cooperation with the American College of Greece, and I’ve missed visiting Deree’s campus during the pandemic—including its beautiful sports facilities that were used by the U.S. Olympic team during the 2004 Athens games.

As we’ve launched the Embassy’s campaign to help commemorate Greece’s bicentennial this year, I’ve been thinking a lot about the important role that American-accredited educational institutions like the American College of Greece play in reinforcing the 200-year bond between our peoples.

The college was founded by American missionaries who started coming to Greece in the 1820s to help the Greeks establish a free society.  Since then, Deree has been fertile ground for intellectual and cultural collaboration between our countries, offering students a U.S.-accredited education and exceptional opportunities based on the values that our two countries share.

Many of these values – fairness, teamwork, equality, discipline, inclusion, perseverance – form the foundation for the sports world and are respected by athletes around the world.

The ancient Greeks believed that sports were part of a person’s overall education, cultivating our mental and physical faculties in a balanced and harmonious way.  To understand the importance of sports in ancient Greek culture, all you have to do is visit Ancient Olympia in the Peloponnese, the cradle of the modern Olympic Games.

For Americans, Ancient Olympia is probably the least well known, though most important classical site in all of Greece.

For twelve centuries, free Greek men from all walks of life gathered in this beautiful, open-air sanctuary to compete for athletic glory.  The Olympic Games unified the Hellenic world and helped to spread Hellenism throughout the Eastern Mediterranean.

Over the last few years, I’ve been honored to join dignitaries from around the world for the lighting of the Olympic Torch that begins in Ancient Olympia.  This moving ceremony showcases how athletics remain a fundamental force in humanity’s quest for self-improvement, achievement, and unified progress.

So I was excited to learn that Microsoft partnered with the Ministry of Culture to bring Ancient Olympia to our desktops through augmented reality.  As we approach the next American-hosted Olympics in Los Angeles in 2028, I very much look forward to building stronger links between Ancient Olympia and my hometown in Southern California.

Since Greece has played such an important and historic role in the development of athletic competition, and sports continue to unite athletes and fans from both our countries, the U.S. Embassy in Athens has frequently joined in and supported major sporting events.

We’ve had the pleasure of welcoming thousands of American athletes who have come to participate in the annual Athens Classic Marathon over the years, as well as the 2004 Athens Summer Olympic and Paralympic Games, and the 2011 Athens Special Olympics World Games, where the head of the U.S. Delegation was our current First Lady, Dr. Jill Biden.

In 2019, I enjoyed meeting members of the U.S. Olympic sailing team, who secured a slot for the Tokyo Games at the Finn Open European Championship qualifying race here in Piraeus.

And earlier this month, I joined Greek Minister of Sports Avgenakis in speaking with members of the U.S. Men’s Water Polo team who were visiting Athens to train with their Greek counterparts ahead of the Tokyo Olympics.

High-level U.S. participation in these major sporting events underscores the importance that our country places on sports as a tool for diplomacy and connecting people from all over the world.

That spirit of connection and love of the game is also central to the State Department’s Sports Diplomacy program, which the Embassy has brought to Greece in the past in partnership with the NBA and the WNBA.  We’ve brought prominent American basketball players to Athens and Thessaloniki to run clinics for young athletes.  We’ve also organized a celebrity basketball game to raise awareness about the fight against human trafficking, which drew 5,000 students from across the Attica region.

Athletes like these sports diplomats are among the greatest ambassadors for the U.S.-Greece relationship and for our bridge-building diaspora community.

Take, for example, my friend Dean Karnazes, a world-renowned American athlete, who is also very proud of his Greek identity and family roots.  Throughout his career as an ultramarathon runner, he has demonstrated the power of the Greek American diaspora to reinforce our bilateral relationship.

Dean travelled to Greece in the winter of 2018 to carry the torch from Ancient Olympia in the run up to the Pyeong Chang Winter Games.  He’s also been a sports envoy for the State Department’s Bureau of Educational and Cultural Affairs around the world, and whenever he comes to Greece, he’s been generous to meet with our Marine guards and others at the U.S. Embassy.

In the same way, Milwaukee Bucks superstar Giannis Antetokounmpo, who won his second straight MVP Award last September, has also stayed true to his Greek roots.  He’s dedicated to his family and gives back to Greece at every opportunity, something I respect enormously.

Giannis’ Greek values are always on display, and I’ve been especially impressed to hear him speak out about racial injustice and support young athletes and coaches from underprivileged backgrounds through an initiative with the Onassis Foundation.  These efforts to level the playing field and promote diversity and inclusion are exactly what the United States stands for.

Finally, before closing, I want to speak for a moment about the ongoing work that all of us must do together to make the sports world safe, inclusive, and welcoming for all.

Like many of you, I was heartbroken to hear Greek Olympic sailing champion Sofia Bekatorou speak out about her sexual assault in 1998 by a member of the Hellenic Sailing Federation.  I really want to commend Sofia for her courage in coming forward to share her painful experience, and I applaud the many Greek political leaders who have stepped forward to show their support.  These are issues that we all grapple with, also in the United States and in our sporting community, so I appreciate how challenging this is.

Finally, on a more personal note, I want to say how fortunate I’ve been over these four years to discover a lot of Greece’s sports potential, from hiking the spectacular gorges of Samaria in Crete, exploring the ski slopes in the winter, snorkeling in the Peloponnese, and cycling many thousands of kilometers all around this spectacular country.

I’m especially proud of my participation on several occasions in the Race of Sacrifice from Patras to Kalavryta, which has been an opportunity for me to join the Greek cycling community in commemorating Greece’s struggle for independence 200 years ago.

So as we look ahead to our celebration of Greece’s bicentennial this year and the Tokyo Olympics this summer, I know that sports collaboration between the United States and Greece will continue as part of our larger effort to celebrate Greece’s history, to honor the accomplishments of its people, and to uphold the shared values that have united our countries for the past 200 years.

I wish you the best for a successful conference, which I am confident will serve to strengthen the fields of sports management, marketing and tourism in Greece.