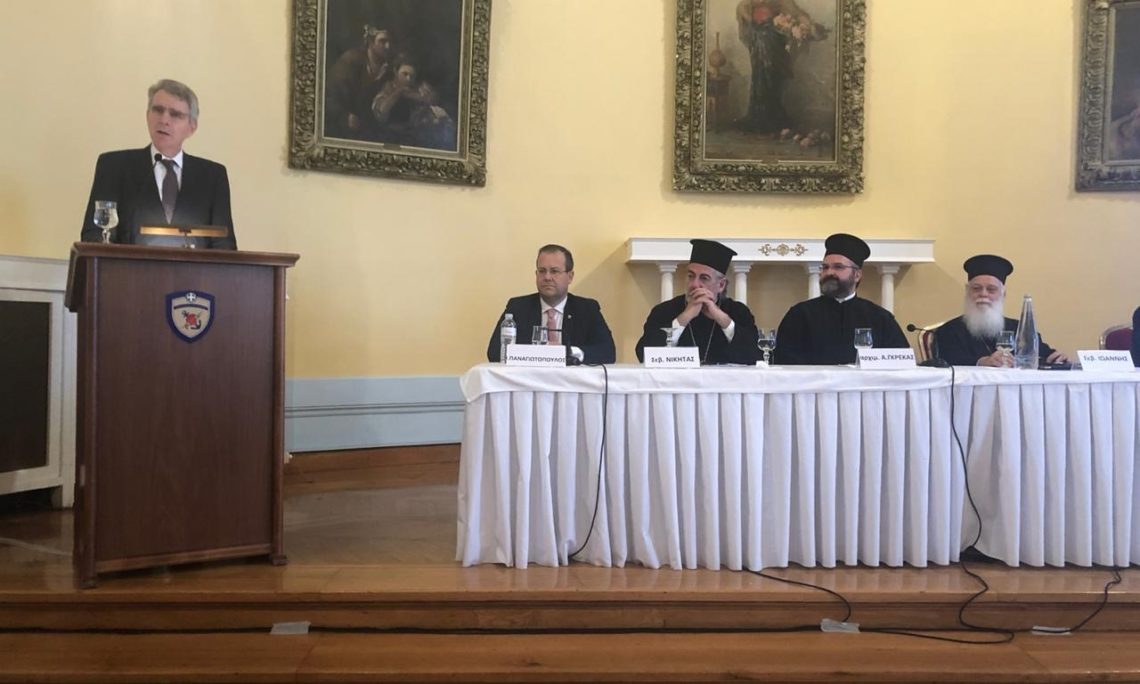 “The Role of the U.S. as a Guardian for Freedoms”

Καλημέρα σας.  Your Eminences, friends, I want to start by thanking the Ministry of Foreign Affairs, Greek Foreign Affairs Magazine, the National and Kapodistrian University, and the Holy Archdiocese of Athens for organizing this Conference.

I’m particularly grateful for the opportunity that this conference provides to exchange ideas with so many distinguished academics and religious leaders and to advance the cause of international religious freedom, which we in the United States hold so dear.

Religious freedom is a foundational American value, a cherished freedom, and a universal human right.  America’s first settlers left their homes and all they knew to create a “city on the hill” across the Atlantic where they could worship as they saw fit.

These settlers carved protections for religious liberty into the founding charters of our nation and our very earliest laws.  And after winning our independence, the crafters of the U.S. Constitution enshrined religious liberty as the first of our American freedoms, along with freedom of speech and the freedom of the press.

Our First Amendment’s Establishment Clause plays an important role in how we view religious freedom and the separation of church and state that is integral to the American Constitution.  The clause not only forbids the U.S. government from establishing an official religion, but also prohibits government actions that unduly favor one religion over another.

In countries like Greece, where religion plays a major role in public life, it is nevertheless important for us to have an open and honest dialogue with religious leaders like many of you.  Indeed, we recognize that for centuries, Greece has been a cultural and religious meeting point which makes dialogues like today’s especially relevant.

We also recognize the importance of Orthodoxy to Greek culture and the Greek people.  Orthodoxy preserved Hellenism through Ottoman occupation and has been key to keeping Greek society together during the economic crisis.  Greek Orthodoxy also plays a significant role in strengthening our people-to-people ties and connecting the Greek American diaspora to their homeland.

In the United States, there is deep respect for the Greek Orthodox Church, which played a key role in our civil rights movement and continues to promote our commonly held values of religious freedom and tolerance.

The United States has also long supported the Ecumenical Patriarch, valuing his firm commitment to interfaith dialogue and respecting his strong voice for the West.

In that spirit of understanding, I have greatly appreciated my visits with the Ecumenical Patriarch and was very pleased to accept His All Holiness’s invitation to visit Mount Athos last year.  I found the monastic community there to be a uniquely spiritual place where Greece’s rich Orthodox tradition thrives in stunning monasteries and remote sketes, amid a virtually untouched natural landscape.

I was honored to meet Abbott Ephraim and the monks at Vatopedi and Simonopetra, and I’m grateful for the warm welcome I received from the Holy Community and the civil governor.

Our Consul General in Thessaloniki Greg Pfleger followed up on my visit, including just last month.  Both of us went to the Holy Mountain as diplomats, hoping to deepen our understanding of the Orthodox faith, and open to the peace and enlightenment that the journey provided us with.

In America, we look forward greatly to His All Holiness’s planned visit to the United States in May of 2020, where the new Archbishop in America, our friend Elpidophoros, has been doing great work to deepen the already strong people-to-people ties between our countries.

And just as we respect and support the Orthodox Church, my Embassy team and I have also met with members of Greece’s many other religious communities to promote interfaith dialogue, religious tolerance, and diversity.

We believe in transparent engagement across all faiths, which is why we commend the Greek government’s ongoing efforts to open the country’s first public mosque in Athens, and why we denounced the desecration of religious sites like the Muslim cemetery in Alexandroupolis.

I’ve also attended many events organized by the Athens and Thessaloniki Jewish Communities to honor the memory of Holocaust victims and promote tolerance, and have greatly valued all that I have learned about the once thriving Jewish communities of Thessaloniki, Ioannina, and Athens.

At our second U.S.-Greece Strategic Dialogue, the United States confirmed our intention to intensify cooperation between the U.S. Holocaust Memorial Museum and the Greek government, to include a joint effort to retrieve personal items belonging to Jewish refugees from the 1946 Athina shipwreck off Astypalaia for inclusion in the museum’s collection.

Today, advancing religious freedom globally is one of the defining challenges of the 21st century and a top foreign policy priority for the Trump administration.

We feel deeply that people around the world should be free to believe, or not to believe, as they see fit.

The United States will proudly lead the charge to protect religious freedom wherever it is under attack, and we will advocate tirelessly for those seeking to exercise their freedom of religion or belief.

This is both a moral and a national security imperative.  When religious freedom thrives, nations reap the benefits: terrorism and violent extremism decrease and economies grow, civil society is strengthened, and opportunities increase for all.

The United States is committed to working with Greece and other democratic partners to defend religious freedom abroad.  That’s why the U.S. Ambassador for International Religious Freedom, Governor Sam Brownback, visited Greece in May, and why we appreciated Foreign Minister Dendias’ participation in the Second Ministerial to Advance Religious Freedom just a few days after Greek elections.

And as great power competition returns to the Eastern Mediterranean along with unprecedented migration flows into Europe, religious freedom has become an increasingly significant part of our mission to build peace and prosperity in the region.

It’s no surprise that malign actors like Russia, China, and Iran, who have different interests and values, “engage in or tolerate severe violations of religious freedom.”

In Iran, Christians, Jews, Sunnis, Bahá’ís, and other religious minorities are forbidden from possessing religious books and denied the most basic rights enjoyed by the Shia community.

Chinese oppression of Tibetan Buddhists goes back decades.  The Communist Party has also imprisoned more than a million Chinese Muslims in Xinjiang and targeted the Christian faith.

Meanwhile, Russia is using religion as part of its hybrid warfare strategy, as a tool to achieve political objectives and spread false narratives.

The United States is deeply concerned about abuses against religious freedom in Russia-occupied Crimea, and we’ve been very clear in our support for the right of the Ukrainian people to determine how they worship and in what context they practice their religion.

As Secretary of State Pompeo noted in January, “The announcement of Autocephaly of the independent Ukrainian Orthodox Church of Ukraine on January 6 is a historic achievement, as Ukraine seeks to determine its future.  At this remarkable moment, the United States of America expresses unshakable support for the sovereignty and independence of Ukraine.”

We see the Church of Greece’s support of the Ecumenical Patriarch’s decision to grant autocephaly to the Orthodox Church of Ukraine as an example of His moral courage and leadership.

By competing with the Ecumenical Patriarch, Russia is trying to use the Church as a wedge to foment instability and undermine democracy.  And just as Moscow manipulates energy resources to extract political concessions and high prices, it’s now cutting off tourism and sacred practices, like commemoration in prayers, from countries that are not toeing its political line.

When Secretary Pompeo visited Athens last month, he and his wife attended a Sunday service at the Greek Orthodox cathedral and then, with our friend Father Thomas, visited the chapel of Agios Eleftherios, the tiny, 12th-century church that captures so well Athens’ rich religious history.

Secretary Pompeo’s very successful visit to Greece, and all the progress we have achieved in U.S.-Greece relations in recent years, ensures that our countries will continue to work together to promote religious freedom and interfaith dialogue, ensuring liberty, stability, and prosperity in the Eastern Mediterranean and beyond.