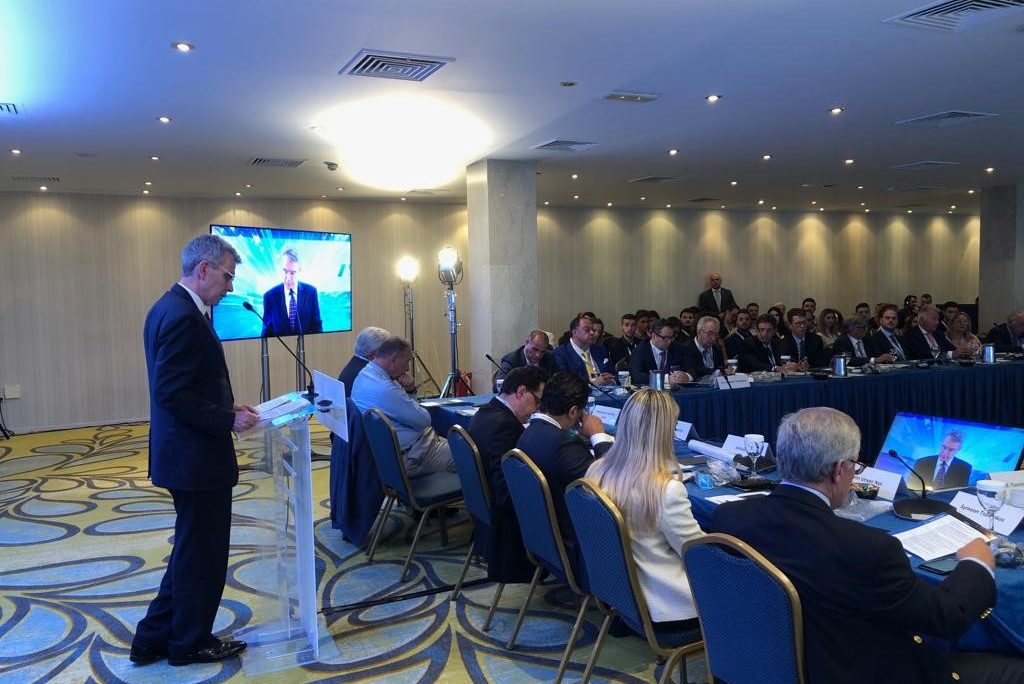 Καλησπέρα σας.  Thank you Sasha, thank you Symeon, thank you Transatlantic Leadership Network for having me, Professor Kotions and my teacher Professor Platias from the University of Pireaus. I think it’s terrific you all collaborated to organize this inaugural Eastern Mediterranean Energy Leadership Summit.  These are really important, timely, and constantly evolving issues, so I very much appreciate this new forum in which to discuss them.

And I’m of course glad to be joined by my colleague Josh Voltz from the State Department’s Energy Bureau who was here in August with Assistant Secretary Fannon, he is a frequent visitor so it’s great to have him back now as we are in the midst of preparing of the arrival of Secretary of State Pompeo on Friday for a particularly important visit in conjunction with U.S. – Greece Strategic Dialogue.

The large American presence at this conference and in Athens these days demonstrates Washington’s considerable interest in the strategically significant Eastern Mediterranean, where great power competition is back, and energy increasingly drives the story.

In an era of renewed great power competition and the largest hydrocarbon discoveries of the past decade, this global crossroads of Europe, Asia, and Africa has returned to the forefront of American strategic thinking.  After years of taking the Eastern Mediterranean for granted, the United States has stepped back to take a considered, whole-of-government look at how we advance U.S. interests and build peace and prosperity in this crucial region.

As Europe’s Southern vanguard, Greece is a key U.S. partner in the region, a trusted NATO Ally that shares not only our interests, but also our values, and as Foreign Minister Dendias put it in his comments last week in New York, “Greece is ready to do its part.”

Together with Greece and other democratic partners, we are working to push back on malign actors like Russia, China, and Iran, they have different interests and values and different visions for the future of this region.

The recent attacks against oil facilities in Saudi Arabia demonstrated that energy resources are part of the global commons, and that their disruption can have worldwide consequences.

In this regard, I should know that we really  appreciate Greece’s prudent and cooperative approach in dealing with the Iranian oil tanker Grace 1, which unloaded its cargo in Syria in violation of EU sanctions, just like U.S. predicted.

We commend Greece for making clear that it would have nothing to do with that ship, and this is another example of Greece playing a positive geopolitical role.

And as I’ve seen throughout my career in Europe, Russia continues to manipulate its energy resources to extract high prices and political concessions, deepening dependence with projects like Nord Stream 2 and the second line of TurkStream.  Meanwhile China, through its Belt and Road Initiative, is working to control trade and transportation routes across Eurasia.  None of these is good for us.

Amid this geopolitical competition, Greece has emerged as an important energy hub with the direct positive impact on Europe’s energy security and diversification.  This is most obvious through major infrastructure projects like the TAP and IGB pipelines the expanded Revithoussa terminal near us here in Attica, and the Alexandroupoli FSRU.

The Greek Parliament’s approval last week of four blocks for hydrocarbon exploration – including two blocks off the coast of Crete won by a consortium that includes ExxonMobil, Total, and Hellenic Petroleum – demonstrates that Greece is joining its East Med neighbors in looking for and hopefully developing new supplies.

America’s goal is to ensure that our European allies and partners have a number of reliable and transparent energy options. Greece is one of our most important partners in advancing this agenda, leading the region in diversifying energy sources and supplies and guarding multiple energy resources that transit through the Eastern Mediterranean.

For this reason, we strongly support the deepening energy cooperation between Greece, Israel, and Cyprus through the 3+1 framework.

We’re excited to see that the rhetorical cooperation among these three democratic partners is already leading to active political and economic partnerships.

We also support the East Med Gas Forum, which aims to create a regional gas market among Egypt, Cyprus, Greece, Israel, Italy, Jordan, and the Palestinian Authority. Just as  the European Coal and Steel Community facilitated energy cooperation after World War II, we believe this cooperative frameworks will also have a stabilizing effect, building confidence, peace, and prosperity in the region.

We continue to look for ways to use energy development and diversification to bring allies and partners together.  This includes dialogue between Greece and Turkey on energy development, which can start to build confidence between two important NATO Allies.  And in this regard we commend the Mitsotakis government for its solutions-oriented approach.

I also want to encourage Greece’s involvement in the Three Seas Initiative, which seeks to strengthen regional coordination among EU member states on north-south energy, transportation, and communications corridors.

Greece has been very active in bridging the flow of energy from east to west, and the Three Seas Initiative presents Greece with an additional strategic opportunity to collaborate with the United States and our EU partners from Central and Eastern Europe.  Participation in the Three Seas Initiative promises Greece additional investment opportunities in business, logistical connections, energy infrastructure, and digital communications.

The great dynamism of the Greek energy sector at this moment mirrors the dramatic progress that the U.S. is making in energy technology.

U.S. LNG exports to Greece have become the new normal, reshaping global energy markets and the role of private importers.  As LNG demand grows, Greek shipping is becoming a dominant factor worldwide in the transportation of U.S. LNG to global markets.  Some shipowners say that LNG could be the vehicle for the most profitable trade in shipping since crude oil tankers powered global maritime fortunes in the 1960s.

The price of LNG has dropped well below the price of Russian pipeline gas, and Greece recently delivered U.S. LNG from the expanded Revithoussa terminal to Bulgaria as its first ever non-Russian gas purchase.

As the floating regassification plant in Alexandroupoli and the TAP and IGB pipelines come online, I’m confident we’ll see additional opportunities to break the GAZPROM monopoly on the Balkan gas market.  And after the Prespes Agreement, Greece is well positioned here, and we look forward to more imports of U.S. LNG to Greece and via Greece to its northern neighbors.

All this activity demonstrates that Greece is quickly growing into its role as a regional energy integrator, as well as a guarantor of European energy security and diversity.

And I expect this will be a major factor of Secretary Pompeo’s conversations when he comes to Greece this weekend. The United States I want to underline is grateful for Greece’s leadership and its role as a pillar of stability in the Eastern Mediterranean and Balkan regions. We look forward to our partnership on these and many other issues taking strong bilateral relationship to even higher levels in the months and the years ahead.