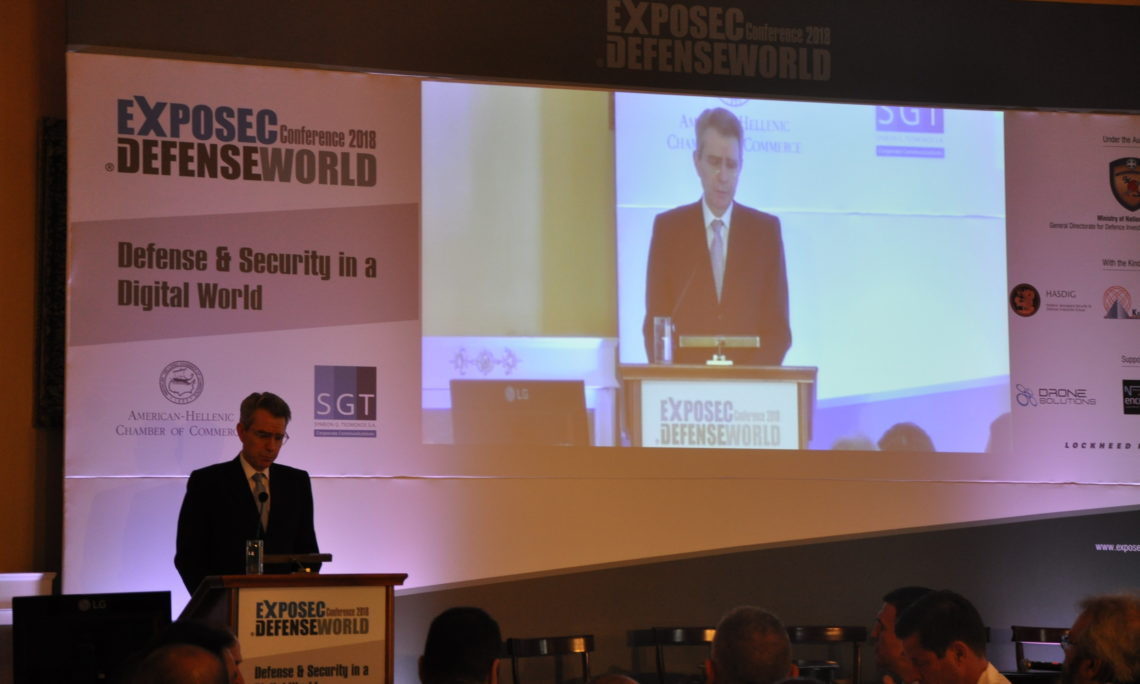 Good morning everyone. I’d like to start by thanking Simos and Symeon for inviting me to speak today. Both your organizations have been at the forefront of our efforts to support Greece’s economic recovery and to encourage U.S. companies to explore commercial opportunities in Greece.

Given how important our defense and security cooperation has been to the strengthening of our relationship, it’s very useful to have you engaged on that pillar as well. And of course it is a great honor to appear on the same program as Defense Minister Kammenos, Alternate Minister Toskas and Shadow Minister Kikilias.

I want to thank all of you for your partnership during what will be a crucial year for the Greek economy and the U.S. – Greece alliance. The next 100 days will be especially critical for the country, as it emerges from its bailout programs and sets a course on the path to recovery and sustained Greek-led economic reform. Our work with Amcham particular has represented one of the most important pillars of U.S. support for Greece’s economic recovery, and I look forward to our close partnership in the many upcoming economic and commercial events we are working on, which will culminate with U.S. participation as honored country in the Thessaloniki International Fair in September. As Simos noted we have a robust program lined up there and I’ll address that a bit later.

But here I will emphasize in the spirit of today’s conference that the American pavilion at Thessaloniki will have a major focus in digital technology and innovation.

It was a special pleasure for me to hear Minister Kammenos and Minister Toskas opening remarks this morning. We have worked very closely together on so many initiatives, deepening our already strong relationship on defense, security and counter terrorism, and I thank you for your and your ministries’ strong commitment to our bilateral relationship and for the work that you’ve done to keep both our countries secure and ensure that our alliance is at its strongest point in many years.

As Minister Kammenos noted a major focus on technology efforts is on of the refining aspect of the US – Greek defense cooperation.

We’ve been fortunate to have a series of visits by senior leaders of the United States which serve to underscore the close cooperation between our two governments on military and security matters. Last week the Commander of Naval Forces in Europe and Africa, Admiral Jamie Foggo, was in Greece. And the Commander of the Sixth Fleet was also here in Greece for the Phoenix Express closing ceremony, a multilateral exercise at Souda Bay focused on North Africa.

Admiral Apostolakis also recently traveled to Washington to meet with JCS Chairman General Dunford and others at the Pentagon, State Department and Congress. There we discussed new avenues for cooperation, the F16 upgrade program, bilateral security matters, as well as Greece’s role as a pillar of stability in the eastern Mediterranean and the Balkan and Black Sea regions.
With all these engagements over the past few months, we have sought to build on the positive momentum from the Prime Minister’s trip to the United States last fall and the commitment there to deepen our economic, defense and security cooperation.

This strengthening of our partnership reflects our understanding that the US has a strategic interest in Greece’s success. The stronger Greece is, the better our ability together to advance pressing defense and security goals across the region.

Greece’s geostrategic position is critical to stability along Europe’s Southern Flank. That was true in 1947, when the US committed to the Marshall Plan, and it’s true today.

Our military exercises and out of area operations are an important element of this defense partnership. I already mentioned the recent Phoenix Express exercise at Souda Bay, which focused on North Africa. Earlier in the year, Greece also convened the most successful INIOHOS exercise to date, including Israel and UAE as participants, and Cyprus for the first time, with Egypt in an observer role.

Greece has also taken initiatives to create new alliances and to convene an ever broadening group of regional partnerships with a mutual interest in security, stability and prosperity. In this regard the United States strongly supports Greece’s trilateral relationship with Israel and Cyprus, and the Greece-Egypt-Cyprus trilateral. And I noted publicly last week our appreciation of Foreign Minister Kotzias’ initiative in convoking the Visegrad-4 and Balkan Foreign Ministers at Sounion. This meeting made clear that Greece is back as a significant positive factor in helping its neighbors to the north move towards European and Euro-Atlantic institutions.

On NATO, I would stress that it continues to be the cornerstone of defense policy for Europe and for the U.S. This transatlantic alliance is our automatic starting point when we approach the most vexing challenges to global peace and security.

The NATO Foreign Ministers Summit was Secretary of State Pompeo’s first foreign trip. While there, he drew attention to the fact that: “Our collective defense demands greater burden-sharing,” including the commitment to increase defense spending to 2 percent of gross domestic product by 2024 with 20 percent of that share devoted to funding of major equipment.

Greece today is playing a leadership role as one of the few countries that is meeting its national obligations to NATO. The recent approval for F-16 upgrades is a great example of both addressing a top national defense priority and meeting these Wales Summit obligations. I have no doubt the F-16 Viper program will be a major success for both countries, helping to enhance Greek defense capabilities and leveraging the strong Greek industrial capacity I saw during my visit to Hellenic Aerospace last summer.

And we are grateful for Greece’s commitment to the most successful alliance in history. I know from my many conversations with US military colleagues how much they respect their Greek counterparts as capable partners that can tackle the numerous challenges in Greece’s complex neighborhood. And both our countries agree that our alliance must be made stronger in the context of emerging challenges; and that a lack of diligence in modernizing our alliance approach will only invite greater risk.

The U.S. has made it a priority to find solutions to keep Greece’s military modernized and capable so they can continue being a stabilizing force diplomatically and militarily.

Many American companies, like Lockheed Martin, Raytheon and ATK,  have established strong business partnerships in Greece. Greek defense companies such as IDE/Intracom and Hellenic Defense Systems are already working with American firms and competing globally. And there is definitely more interest from American companies, hoping to get involved in Greek ports, in the energy sector, and other technology-driven industries as the Greek economy rebounds.

At the same time, I note that one of the topics of this conference is “Managing the Downturn: How the Greek defense industry can overcome obstacles and achieve sustainability.” Reenergizing the defense sector will be a challenge in today’s economic environment because it requires investment, commitment, and cooperation from those in the public and private industry, academia, the military and the private defense industry as well as the ministries – to create rules which enable foreign direct investment and work force flexibility.

At the same time, I note that overcoming obstacles has been a huge strength of Greece over these long years of economic crisis. In my travels around Greece over the past 20 months, I have been very impressed with the level of innovation, research and development, and entrepreneurial spirit I have seen among academia, private businesses, and most importantly the youth of this nation. These are the key ingredients in building a sustainable and competitive defense industry here in Greece.

Greece has the right formula to succeed in merging innovation with the defense industry. When I was in Patras, for instance, I saw an innovative Greek company with strong ties to the United States that is developing world-class energy storage solutions with direct military applications. Likewise, during a recent trip to Thessaloniki, I saw great opportunities for innovation in the defense industry with companies at Thess INTEC.

So together, we need to look for new opportunities, to reassess how Greece integrates and consolidates its strengths in order not only to compete in defense industries, but also to determine where it can take the lead. A real world example of this kind of opportunity is the introduction of the Kiowa Warrior helicopter into the Hellenic Army.

We expect that this program will become another excellent example of our defense partnership, fostering evolution and innovations within our defense industries. I would also point to the regeneration of the P-3B aircraft and of course the F-16 upgrade program as opportunities to ensure that Greek technological capabilities thrive long after the programs themselves are complete.

Last October, I traveled to Washington with then Alternate Minister Vitsas as Greece established one of the newest chapters of AUSA, the Association of the US Army, a non-profit organization that supports all aspects of national security including defense institutions and the defense industry and advances the interests of military members and veterans.

AUSA is the “flagship” defense industry convention in the U.S., and Greece’s official representation there will be an important part of our work to develop innovative, multi-purpose solutions that reduce costs while meeting requirements across the government and internationally. AUSA will also figure prominently at the Thessaloniki International Fair, which, as I mentioned earlier, will be the culmination of a series of economic and commercial activities we have planned over the summer to strengthen our economic ties, highlight the end of the 3rd bailout and help to generate interest in Greece as an investment destination.

On top of the important participation of Hellenic AUSA and the Greek defense industry at TIF, we already have exciting promises of participation from mega companies like Google, Microsoft, Coca-Cola, Cisco, and Facebook. So TIF will touch on every sector of our economic, commercial and technological relationship, including defense and security. We also expect a high-level delegation from Washington to represent the U.S. at the fair, led by Commerce Secretary Wilbur Ross, and we are looking into the possibility of convening regional counterparts during the TIF, which would highlight our commitment to supporting Greece as a regional leader and our continued presence and partnership in northern Greece in particular.

In conclusion, I want to reiterate the importance the United States place on our alliance with Greece, the capacities of our Greek partners, and the fact that the friendship between Greece and United States has never been stronger. It is an alliance based on the strategic interests of both our countries, and we must use every opportunity to build on this momentum to ensure that 2018 will truly be a milestone year in Greek-American cooperation on all fronts. Ευχαριστώ πολύ.