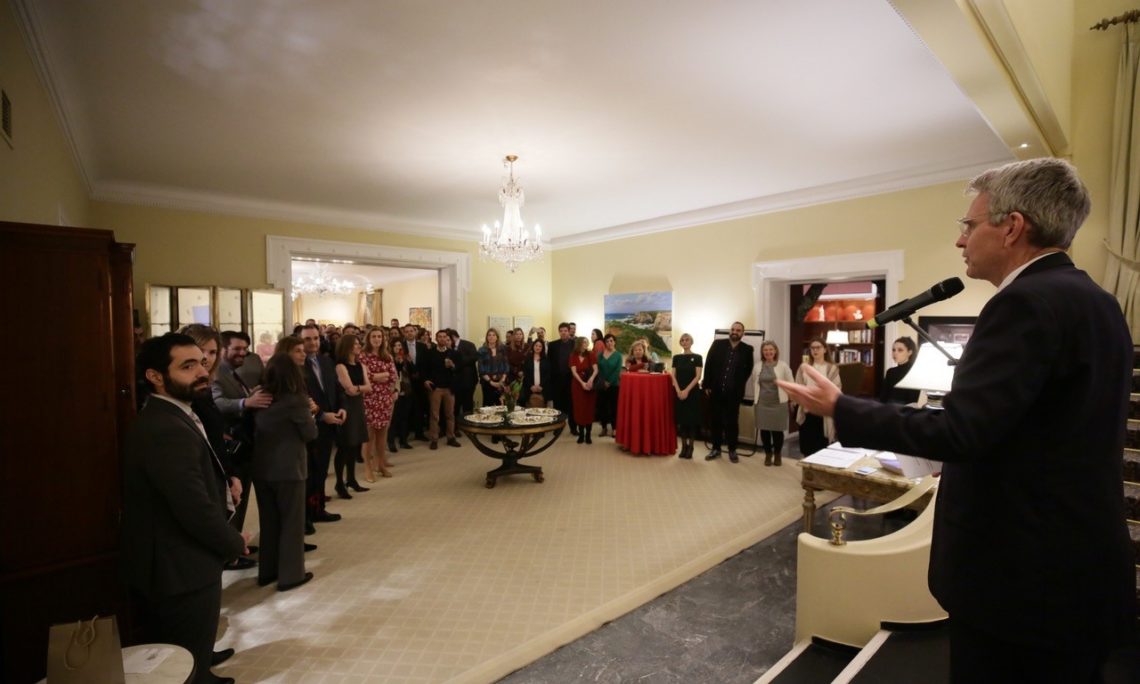 Good evening, everybody. Welcome. I’m going to make this relatively brief. This is a wonderful group of people. I love these events. These are some of my favorite events of the year. I just wanted to say a couple of quick words. Before I get to my remarks, though, I want to do a particular acknowledgement, and that is

of Parliament President Tasoulas, who is with us this evening, the third ranking official in the Greek political constitutional order. Mr. President, thank you very much for honoring us today with your presence.

I want to tell a quick story, which is the first time I went to see the President after the elections at Parliament, I had no idea that he was an exchange alumnus. So it was a great surprise for me when he mentioned that one of the defining aspects of his political experience was when he had the opportunity as a mayor to travel to the United States with a number of his fellow Greek mayor colleagues, and it’s just a wonderful illustration of the power of these exchange programs. So thank you, Mr. President, for being a wonderful advertisement for what we do with the exchange programs.

I also want to say a special thank you to everyone who has come from outside of Athens to join us today. I know we have guests this evening from Thessaloniki, from Crete, from Ioannina, from Trikala, from eastern Macedonia and Thrace, so thank you to all of you for making the journey to be here with us.

I’m also just back from travel. I was in Washington, DC, of course, with the Prime Minister. It was a spectacularly successful visit. It has really helped to bring our bilateral relationship to a new level, and the Prime Minister did a remarkable job of telling the story of Greece’s resilience and economic recovery, so it was a real privilege to be there.

Of course, all of my friends in the media, many of whom are here tonight, only wanted to talk about the Turkey parts of the visit. But for me, one of the most powerful results of the visit was the work that the Prime Minister did along with Minister of Education Kerameus, who was part of the delegation. It was so obvious in the presentations that the Prime Minister made that he cares deeply about the people-to-people aspects of our relationship, and it was also very clear to me that one of the most effective investments that we can make to capitalize on the positive moment in U.S.-Greece relations that we’ve arrived at is more of this kind of bridge building.

So it was incredibly powerful that Minister Kerameus announced a Greek contribution to the Fulbright Program, which we hope will be permanently written into the budget of the Ministry of Education. And also, that we, the State Department, were able to announce a State Department contribution to support the costs of a program that Minister Kerameus and we will work together on this spring to bring university administrators from the United States to Greece to explore opportunities to deepen the kind of partnerships and ties that you all are part of. So, first of all, I’m deeply grateful to Minister Kerameus and all of her colleagues from the Ministry of Education who are here tonight who worked hard on these issues, and I promise you that all of your hard work was not in vain, and in fact, really, was one of the most impressive aspects of everything that the Prime Minister accomplished over the course of the visit.

Most of you I’ve met before, we’ve done a couple of these exchange alumni receptions. I’m very glad tonight that I think all of you have now met Cindy Harvey, who is our fantastic new Public Affairs Officer, the boss of all of these programs, as well as David Burger, who is my deputy, both of whom have been here since the summer, although I’m guessing they both feel like it’s been longer because there’s been a lot going on.

But every time I meet with all of you, I’m impressed by the numbers of people with remarkable achievement, whether in the media, academia, politics, or business. You really are the very best of Greece, and I would like to think that at least a small contribution to those achievements was provided by the investments that the U.S. government made at one stage or another in any one of our exchange programs.

I’m told that at this point, there are ten sitting members of Parliament who are Fulbright or IVLP alumni, and six Cabinet members who are alumni, which I think says a lot about the orientation of this government and the choices that Prime Minister Mitsotakis has made.

Tonight is first and foremost a celebration of all of you, of what you have accomplished, but also how you have helped to contribute to a relationship between Greece and the United States that, as the Prime Minister and Vice President Pence both said last week, is better than it has ever been, but is also–and this is important for me and my Embassy team–I think also more important than it’s ever been in terms of the impact on the wider neighborhood, the strategic role that we see Greece playing in a really complicated and difficult region where we are competing for influence and trying to build stability against some sometimes difficult circumstances.

Every time we send a Greek exchange grantee to the United States, we’re making an investment in your futures, in the role and the confidence that we have in your professional prospects. So I really value this program. I know that Secretary Pompeo and the leadership at the State Department, and our colleagues in Congress, who provide the money, share the importance that we place on this program. What I sometimes have a hard time of conveying in Washington is just how life-changing these experiences can be. And what a pivotal experience they have been for many of you. So I’m very happy that we are continuing to maintain these connections.

I know there are a couple of you who have been part of our Exchange Alumni Grant Programs to do different things, and I’m very happy that we’ve got grants of up to $25,000, and this year, we’re focused in particular on programs that support women’s empowerment. So I hope very much that all of you–I know there are a lot of ideas out there, so Cindy and Jennifer and everybody are here to take them on-board, but please think boldly and let’s figure out how we can work together in this way.

I’m going to wind up. I just again want to thank Artemis, your whole team at Fulbright for the terrific partnership that we’ve enjoyed and all the work that we do between the Fulbright team and the Embassy here.

This is a formula that has proven again and again that it works. So, thank you everybody for being with us this evening. Καλή χρονιά! We’ve got a big 2020 ahead of us, we have a whole lot of momentum. I can’t believe it’s only the 16th of January, but we’re very, very excited about what this year holds for us, and delighted that we’re able to kick off the year as an Embassy by welcoming all of you, who are all, in one way or another, ambassadors for the United States. So, thank you very much. Enjoy the reception!