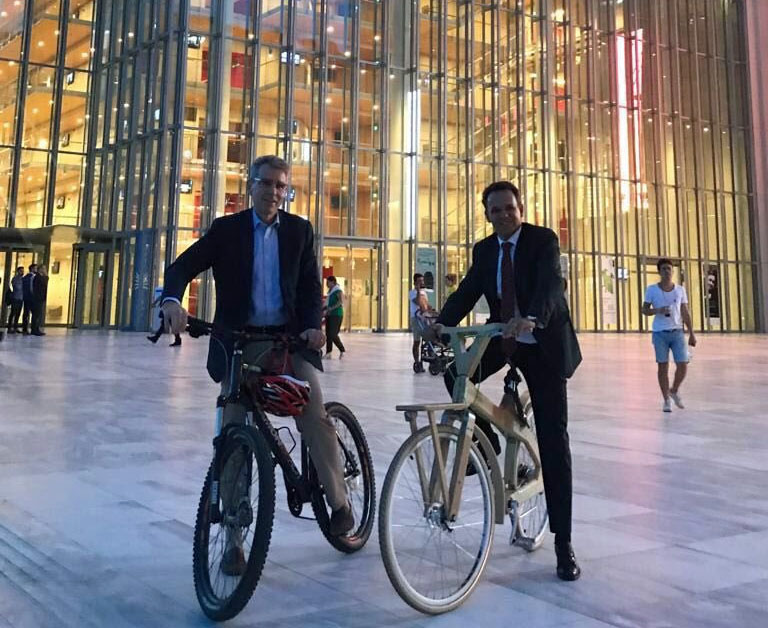 Kalispera, thank you very much, Spiros.

Let me start by saying what a real treat it is to be back here at the Niarchos Center, and I was saying to Gabriella, Nikos, and some of our Niarchos partners when we arrived, I’ve come here many, many times, but it’s my first time at this time of the evening. And first of all, the light is beautiful as you see the Renzo Piano building in the sunset, but also how much life this part of the city is filled with.

The other reason I was very excited when Spiros invited me to do this is that it gave me an excuse to finally discover the Kallithea-Thessaloniki Street bike path, which I knew existed, but it was like in mythology. Now I’ve actually, I know where it is and I know how to get, it exists, and to see how it connects the heart of the city, essentially the Acropolis here with the seaside.

But I am passionate about this and welcome the opportunity to share some lessons from the United States.

I think the first point that I would make, and it’s really important to understand in terms of how the bicycle has changed in many American cities, is to view it not as a toy or as a sport or a form of recreation, but as a core part of the transportation network. It’s just like buses or trams or subways. And once you make that leap, it’s a very different kind of conversation because yes, for instance it does require some road space to establish a protected bicycle lane. But if you look at the amount of road space that it takes to move say a thousand people on a bicycle compared to a thousand people in a car, one driver and maybe one passenger per car, there’s no comparison. And certainly the cities that have been most successful in this regard are the ones that have followed the European model of trying to integrate the transportation network and integrate bicycles into the transportation network.

As Spiros said, we’ve had some great successes with our bike share programs as part of the transportation network. Almost always driven by a determined Mayor. And I actually told the Athens Mayor I was going to be doing this event, because I really do believe that Athens has tremendous possibility in this area.

The most famous program in the United States, as Spiros said, is New York. It’s one of the largest bike share programs in the world right now outside of China. The largest programs are all in the big Chinese cities — Beijing, Shanghai, et cetera. Ironically, China has rediscovered the bicycle. You saw China in the ‘60s, and everybody was on a bicycle. And then they moved into cars. But now they’ve come back to the bike share programs.

The largest program in Europe is the Vélib‘  program in Paris which is fantastically successful. Barcelona’s also very large for that. And London is large. But New York has now surpassed London. So they have about 12,000 bikes; 60 neighborhoods; and 750 stations. And you see them everywhere in New York City. And what’s amazing to me, and I, in my recent jobs I’ve been to New York about once a year, every time you go back there is more, more protected bike lanes, there’s more bike infrastructure that is emerging.

And when you’re coming down Kallithea Street, one of the things that struck me as we came down the Athens bike path, was how much life there was around that bike path. Parks, and people walking their dogs, and pensioners out with their grandchildren. That’s the same thing that’s happened in New York City. The streets that have been given over to bicycle infrastructure have gone through a social transformation because instead of being in these large cars, closed off from their community, people are out and about, and it’s an important transformative impact.

So New York City is the best example that even in a big urban environment you can make transformational change.

Another program, which has been very successful, is in our capital, in Washington, D.C. The Washington, D.C. bike share program just surpassed 20 million users and they have about 4,300 bikes and more than 500 stations.

These have been, unlike say in the Netherlands, especially in our big cities, people don’t have bikes parked in their garage at home all the time unless they are serious cyclists. But what these bike share programs have done, as I said, it’s changed the bike into a means of transportation.

The last point I should make is, my home town now of Los Angeles, which is a lot like Athens. Very car dependent, very spread out. But even Los Angeles now has a growing bike share program, completely integrated into the urban transportation network so you can use the same touch card on your bike share, a bus, on the metro, and you can transfer from one to another.

One of the lessons from Los Angeles, and it’s very relevant to Athens, because like Athens, Los Angeles is, in fact, a number of smaller municipalities. So just as you have, across Attica you have these small cities, the challenge in Los Angeles has been to build the networks across this very large urban region.

But I think in the U.S. certainly, it’s here to stay. And I know that Spiros, I think here in Athens you had one reception on e-bikes which have become, are growing very, very fast. The fastest growing sector of the bicycle market in the United States is e-bikes, largely for transportation.

In Greece I’ve been impressed, one of the first Greek startups that I met was a company that’s headquartered in Thessaloniki, that does bike share across Europe. And then not to long ago I went to Trikala and I discovered the Trikala Bikes and had the Mayor tell me how successful that program has been. In fact rode a bike around Trikala with the Mayor and some of his colleagues.

And I still, every once in a while, I’ll be in a Greek city for the first time, and I’ll discovered this little pocket of bicycle culture. As Spiros alluded to, I’ve been very committed to my cycling here in Greece. I say to people, especially the outskirts of Attica, some of the best coastal cycling
I’ve seen anywhere in Europe is right here in Attica. The ride from Athens out to Sounion is fantastic. You’ve got some very difficult climbs, to Parnitha to Hymettus and I think with a little more work this could be not just a means of transportation in the city, but also something that will grow the tourism economy and help the Greek economy in that regard as well.

I was glad to see in the most recent edition of the “Greece Is” magazine, there’s actually a section dedicated to the Attica bicycle culture. So I think there’s something to this.