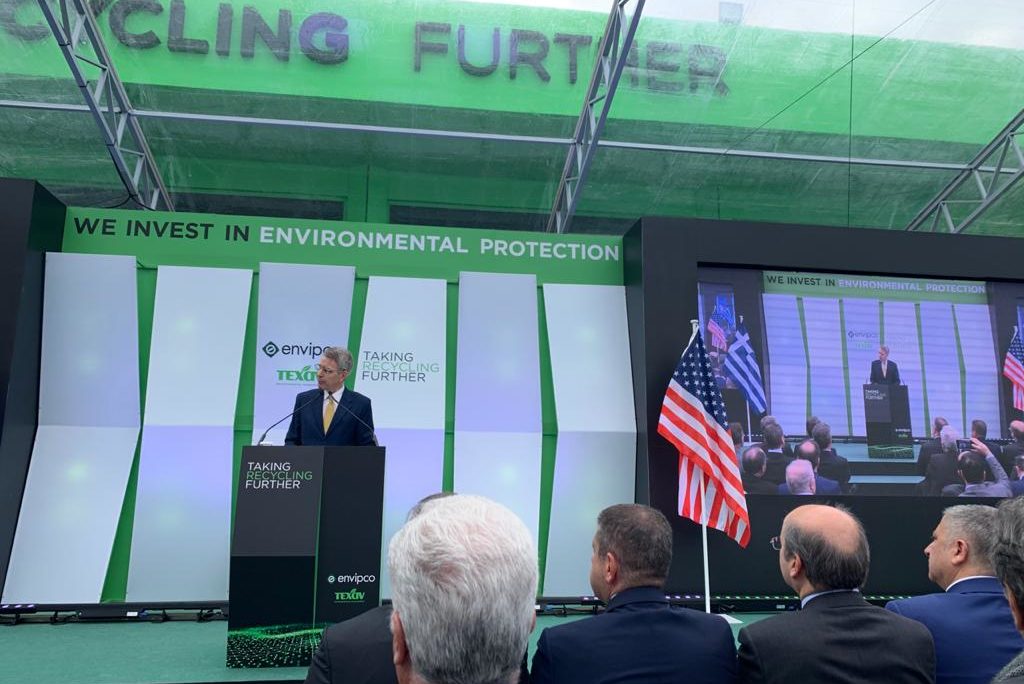 Kαλημέρα σας.  Prime Minister Mitsotakis, Minister Hatzidakis, Minister Theodorikakos, Mr. Patoulis, friends. Thank you for being with us here today, and thank you especially to Texan and Envipco for inviting me to speak.

As the effects of climate change become clearer and more acute around the world, these kind of efforts to protect the environment and conserve our natural resources are attracting serious interest in investment.  That’s as much true here in Greece as it is in the United States.

And what I would like to emphasize today is our appreciation for the fact that Prime Minister Mitsotakis has been bold and visionary in his approach to these environmental policy issues.  We welcome, for instance, his commitment to the elimination of lignite power by 2028, but also his plans to eliminate the use of single-use plastics by 2021.

We also welcome the government’s policy on waste management and recycling that Minister Hatzidakis unveiled last month, especially the efforts to increase public-private partnerships and to upgrade the recycling network in Greece, another example of this government’s resolve to think big and act boldly.

Both our countries are working to develop a circular economy, where the goal is to minimize waste by maximizing the recovery and reuse of materials.  This is not just a defensive measure for our planet, but an opportunity for large-scale investment in an area where U.S. companies benefit from America’s unique business climate, with its emphasis on innovation and investment in creativity.

Envipco is headquartered in the U.S. state of in Connecticut, where I worked for two years, and I’m very grateful for their partnership with the Embassy.  It is a world leader in the manufacturing and development of automated recycling machines.  Together with Texan, Envipco Hellas has been established to assemble these machines in Greece using parts imported from the United States.

This is the first Envipco manufacturing plant outside of the United States.  An 8.5 million dollar investment that, from the beginning, will create 60 new jobs in Greece.  Its aim is to cover the recycling machinery needs of the Greek and European markets, serving as a regional distribution hub for all of Southeastern Europe.

I’m also proud that Envipco had a stand at the U.S. Pavilion at the Thessaloniki International Fair in 2018, which I visited with Secretary of Commerce Wilbur Ross and separately with Prime Minister Mitsotakis when he was the leader of the opposition.

Like my home state of California, in Greece, there is, in the abstract, clear agreement that the recycling of plastics is important. But work must still be done to raise awareness about what products can be recycled, and to create market incentives.

Envipco’s automated machines clearly will help to incentivize recycling and to teach best practices. Envipco’s “reverse vending machines” make it easy and convenient for the public to redeem container deposits on glass and plastic bottles and cans.

I’ve already seen these machines located all over Greece, including through recycling agreements with the Hellenic Police and the Ministry of Defense. They are located at metro and tram stations through an agreement with Urban Rail Transport, in municipalities, and in supermarket chains like AB Vassilopoulos, Lidl, and Masoutis.

Today’s inauguration, like our shipyard re-opening event in Syros yesterday, underlines the strength of the U.S.-Greece trade and investment relationship, a theme that I hope will be central when Prime Minister Mitsotakis travels to Washington next month to meet with President Trump at the White House and to meet with our companies and representatives in Congress.

As a resident of Athens who has traveled widely in this beautiful country, I fully support Prime Minister Mitsotakis’ and his government’s efforts to preserve Greece’s unique cultural and environmental heritage by protecting the environment and reducing waste.

We at the Embassy look forward to continuing to partner with Greece on sustainability and renewables initiatives. I look forward to seeing more of these Envipco machines around the country, and we look forward to Greece’s leadership in exporting these technologies and best practices to the wider Balkan region.  Ευχαριστώ πολύ.