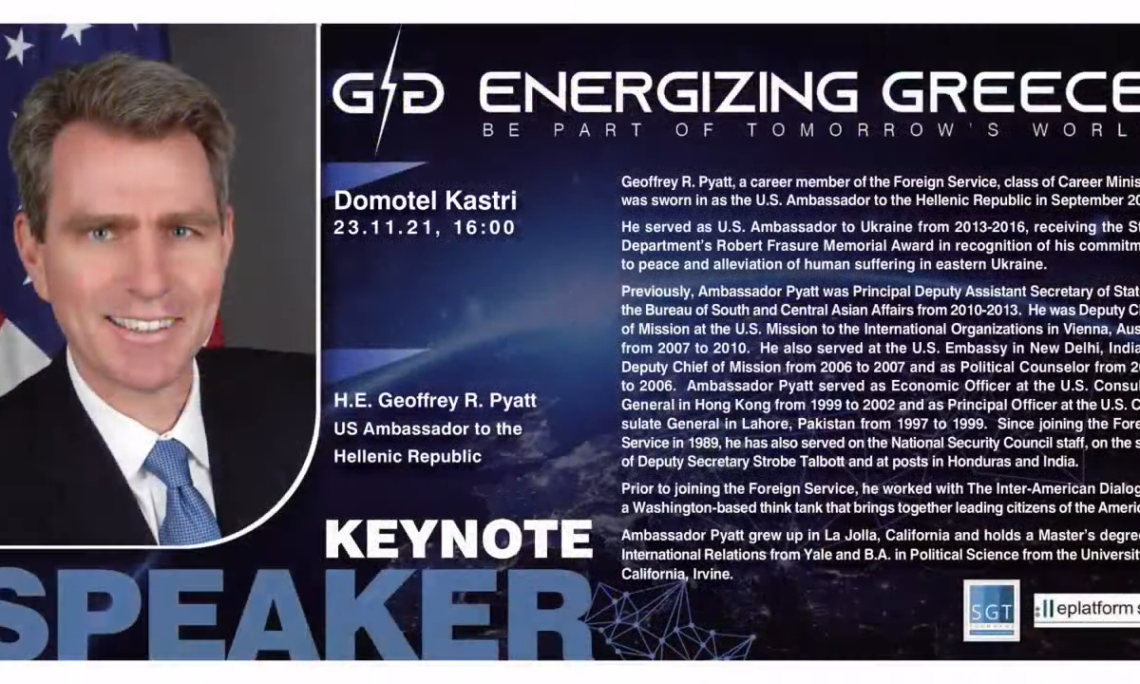 Kalispera sas.  Minister Plakiotakis, Secretary General Smyrlis, Symeon, colleagues, and friends, thank you for inviting me to today’s inaugural Energizing Greece event.  It’s a tremendous honor for me to be here to join in the discussion on a topic that everybody here knows is near and dear to me, and one that I’ve worked to advance throughout my tenure here in Greece: that is, the critical importance of Alexandroupoli as a strategic hub for Southeast Europe, in a region of vital importance to the United States.

There is a lot that I could say about our robust defense cooperation in Alexandroupoli, which Minister Plakiotakis alluded to, and I’m very much looking forward to joining Minister of Defense Panagiotopoulos, General Floros, and others for our Distinguished Visitors day there in Alexandroupoli next week, but tonight I want to focus on the city and its port as a vital economic and energy hub, full of potential for greater U.S.-Greece cooperation, as we leverage our converging interests and our shared values in the Balkan and Black Sea regions.

Alexandroupoli is much more than just another Greek port town.  It plays a leading role in our countries’ shared goals of increasing European energy security and regional stability, as well as combating climate change.  It’s a gateway to a market of more than 30 million people across the Western Balkans.  It’s an entry point for goods and services and with the completion of the projects Minister Plakiotakis alluded to — the FSRU, the IGB pipeline, and a GE power plant — it will become a major entry point for clean energy that will supply all of southeastern Europe.

As it has since the days of Alexander the Great and the first Persian War in Greece, Alexandroupoli occupies a strategic position bridging key ground and maritime routes at the nexus of Europe, Asia, and Africa.

The United States is supporting Alexandroupoli’s development on multiple fronts.  First, and most importantly, I’m very proud that we have two strong American bidders for the Alexandroupoli port privatization in the form of Quintana and BlackSummit.

These firms are committed to bringing world-class expertise and resources that will help Alexandroupoli to reach its potential as a thriving logistics and energy hub.  And I was glad to hear Minister Plakiotakis emphasize that aspect of the Alexandroupoli privatization.  And I want to ensure you that the two American bidders are in this contest to win.

We are also working closely with our partners here in Greece under the people-to-people pillar of our bilateral relationship to promote inclusive and sustainable growth in Alexandroupoli and throughout Eastern Macedonia and Thrace.

For example, I’m very excited about the launch of Women Act Alexandroupoli, expanding on the success of their launch in Thessaloniki three years ago with the support, among many others, of Mareva Mitsotaki.  I’m confident that Women Act’s presence in this strategically located city will encourage more women to take a seat at the table and to contribute to the decision-making processes that will define Alexandroupoli’s future growth and regional prominence.

Turning to energy cooperation, I’ve spoken a lot over the past few years about how Greece and the United States are working together in support of our shared energy transition and climate goals.  Alexandroupoli is a key piece of this puzzle as we seek to tackle the climate crisis together.

We can easily point to the progress on several major energy projects over the last year, like TAP pipeline, the IGB, and the FSRU.  Alexandroupoli has a piece of all of these.

Ensuring secure and climate friendly energy supply is one of the pillars of the Biden-Harris Administration’s foreign policy.  That is why Secretary Blinken appointed Amos Hochstein to serve as the State Department’s Senior Advisor for Energy Security.  Amos is a longstanding friend of Greece and recognizes the critical role that Alexandroupoli can play in ensuring energy security for eastern Europe.  In fact, he and I were in that city together in 2017 for the first AmCham Northern Greece Energy Summit.

As everyone in this room is keenly aware, spot gas prices have reached all-time highs, and Russia has been clear with its intention to use gas as a tool for political and economic leverage.  Alexandroupoli is part of the solution to this challenge.

In the Western Balkans, Greece has rapidly normalized its relations with northern neighbors, including through the Prespes Agreement, something that my government strongly supports.  Greece and the Balkan countries are now collaborating on energy security and diversification, working to break external gas monopoly with joint investment projects including the FSRU and IGB.

I am glad that the gas transmission operators in Greece and the region are looking at how to leverage existing networks like the Trans-Balkan pipeline also to deliver gas from Alexandroupoli and TAP to markets as far north as Ukraine and Moldova.  This too would further reduce Gazprom’s monopoly power in eastern Europe and therefore Russia’s political leverage over the countries of the region.

In the future, Alexandroupoli will also have a critical role to play in the energy transition.  We strongly welcomed the bold vision Prime Minister Mitsotakis outlined at Glasgow, where he talked about Greece becoming a hub for the transfer of clean energy in the Mediterranean, a leader in decarbonization of the maritime sector, and incubator for innovative projects like the green island initiative.

Alexandroupoli is poised to support this vision in many ways.

For example, the FSRU will increase supplies of cleaner LNG, much of which we hope will be sourced from the United States, for a wider region that includes Greece, Bulgaria, North Macedonia, and Serbia.  All of these countries will need stable, secure supplies of natural gas to decommission dirty energy sources like coal-fired power plants.

Alexandroupoli will also host a new natural gas combined cycle power plant built by the Copelouzos Group featuring cutting-edge GE gas turbines, which will make that plant one of the most efficient in all of Europe.  The plant will also be an important symbol of Greece’s growing regional cooperation in energy since North Macedonia will co-own the plant, and the facility will be designed to export electricity to all of Greece’s neighbors.

As countries around the region transition to cleaner energy sources, Greece is also positioned to be among Europe’s major generators of wind and solar power.  Alexandroupoli can play a leading role here as well, with the port able to help service offshore wind facilities and the potential to become a transit point for clean hydrogen.

We are very fortunate that American and Greek perspectives and interests in the Eastern Mediterranean, Western Balkans, Black Sea and beyond are more aligned than ever before.  And the growth of our bilateral economic and energy relationship naturally translates into benefits for the wider region, where we share a common vision for advancing peace, stability, prosperity, and democracy.

President Biden has underscored the United States’ commitment to the transatlantic relationship and the U.S.-Greece relationship as we together face today’s global challenges, from climate change to the pandemic and threats to regional energy security and political stability.

Nowhere in the region is this more evident than in Alexandroupoli, which I have seen grow in strategic importance during my five years as Ambassador.

Building on the 200-year friendship between our countries, of which our robust trade, investment, and energy partnership is a key part, we are working together to advance our shared vision for stability, security and prosperity.  Alexandroupoli is at the heart of this cooperation.

Partnering with the best of American industry, drawing from the ingenuity of our countries’ shared passion for innovation, I look forward very much to realizing together Alexandroupoli’s great promise and potential, and I’m very excited to be part of this evening’s conversation.