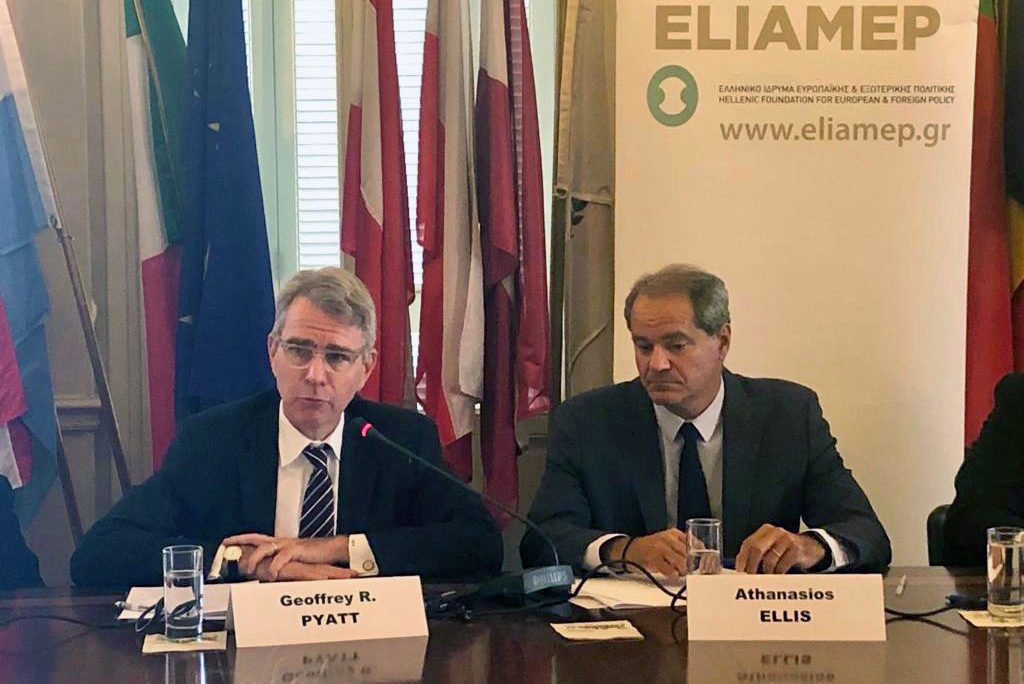 ELIAMEP and American College of Greece

Ambassador Pyatt:  I will try to mirror my Cyprus counterpart and be brief so we have time for discussion.

Let me start by commending Thanos, ELIAMEP and Claudia and DEREE for putting this event together.  This is a really important set of issues and I’m delighted to be able to have this prestigious audience, to have Ambassador Theodorou here, and also to have my new Israeli counterpart whom I look forward very much to working with in the months and years ahead.

I would also note, we’re meeting at a particularly busy time for the American Embassy in Greece.  We had Secretary of Commerce Wilbur Ross here two weeks ago for a visit that highlighted the United States’ enthusiasm for the changes that are happening under the new Greek government and the investment and economic opportunities, the green light which we see in the decisions that are coming from Prime Minister Mitsotakis and his team.

I’m just back from Alexandroupolis, a strategically important visit which focused both on our exceptional military to military relationship with Greece, but also the strategic investment that the United States government is making in Alexandroupolis, in recognition of the role that Eastern Macedonia and Thrace is achieving as an energy crossroads for Central and Eastern Europe.  It also comes on the heels of our renewed presence at the Thessaloniki International Fair, and I was really delighted, both by the success of our continued partnership with the American Hellenic Chamber of Commerce and our enduring presence at the Thessaloniki Fair, but also to see how the initiatives that we set in motion last year with the Ministry of Digital Policy to support Greece’s startup ecosystem were delivering results and have now been institutionalized and embraced by Minister Pierrakakis and his team.  And of course we had in Thessaloniki the third Northern Greece Energy Summit hosted with our partners at AmCham, highlighting both the enduring U.S. commitment to our presence in Northern Greece, but also the significant role that energy plays in that effort.

Right now, of course, at the Embassy and with our counterparts at the Foreign Ministry, we’re all working 24/7 on the preparations for Secretary of State Pompeo’s visit and the Strategic Dialogue that will take place when he is here.

Energy issues will feature prominently in that visit and in the Strategic Dialogue because they have been one of the great bright spots of U.S.-Greece relations.

Tom mentioned that Kyriakos is the Dean of our Diplomatic Corps here.  I found out recently that I have become the Dean of the State Department Ambassadorial Corps in EUR.  So I’ve been in the region as Ambassador longer than anybody else in the bureau.  I’m entering year seven now.

So I have some perspective on this.  And when I think about — and as I look at this period, one of the things that has changed most dramatically in our agenda with Greece over my three years here has been the prominence of energy issues in our bilateral relationship, but also the progress that we’ve achieved across a broad range of issues: the inauguration of the Revithoussa Terminal; the completion of the TAP Pipeline; the inauguration of the IGB Pipeline; the commencement of U.S. LNG exports to Greece, which have become a sort of new normal now; the rapid transformation of the role of private importers in the Greek energy market.  And if you look at the data that Mytilineos put out as they have emerged as Greece’s largest LNG importer and how that’s changing the market, this is a very, very dynamic moment in the Greek energy story.  But that dynamism parallels changes that are happening in the U.S. role as the United States has now emerged as the world’s largest exporter of oil and gas  — something that was completely unforeseen a few years ago, as the U.S. is making dramatic progress in energy technology and is poised to continue to play a major role in the transformation of the energy marketplace.

I read in Kathimerini yesterday about the decision for the closure of most of Greece’s lignite coal plants.  Some of that power requirement will be filled by gas-fired power including a new Mytilineos facility using state-of-the-art General Electric technology that we will be inaugurating the construction of early next month.  So there are a lot of trend lines coming together.

I was speaking yesterday with a major Greek ship owner who told me that he has just signed a transportation agreement with America’s Cheniere for the carriage of U.S. LNG to global markets.  This ship owner is also now contracted for two additional LNG carriers which highlights the fact that Greek shipping is a dominant factor in the global LNG market and it’s a market that’s particularly dynamic.

So there’s an awful lot that is coming together.  I’ve probably spent, other than Minister Dendias, I’ve probably spent as much time with Minister Hatzidakis as any member of the new cabinet in a reflection of the priorities we’ve placed on these issues.  I was delighted that Minister Hatzidakis was able to meet with his U.S. Department of Energy counterpart, Secretary Perry, in his first couple of weeks in office; but also that we were able to have the State Department’s Energy Envoy, Frank Fannon, here in Athens for a 3+1 Ministerial, which from an American standpoint was tremendously successful, hosted by Minister Hatzidakis, but with counterparts from Jerusalem, from Nicosia, from Washington.  And I think it was important for us that that was a discussion that wasn’t just the high politics, which is what we had in Jerusalem when Secretary Pompeo was with Prime Minister Netanyahu and with counterparts from Greece and Cyprus to launch this process, but it was really about practical cooperation: how we work together on issues ranging from emergency preparedness to cyber security to non-carbon renewable sources.

So this is an important basket of issues.  I would emphasize that from an American standpoint our engagement in this area, our Embassy’s work in this area, our support for the 3+1 is not just something we’re doing because it’s nice.  It’s part of a considered strategy as we look to an era of renewed great power competition in Southeastern Europe and in the Eastern Mediterranean.

We see Greece as one of our key partners, a country which shares our interests, but also our values.  We are working with other democratic partners in the region to push back on maligned actors like Russia and China who we believe hold different interests.  And on Russia in particular, you can see, and certainly, again, my ambassadorial tenure in Europe has been marked by the use of Russia of energy as a tool of malign influence, and it’s something that multiple U.S. administrations have sought to push back on through a strategy of advocating the diversity of routes and supplies and sources of energy for our European Partners.

And Greece has become one of our most important partners in the European Union in advancing that agenda.  So we applaud Greece’s leadership in this regard.  We strongly support the trilateral  — Greece, Israel, Cyprus — which brings together, again, countries who share interests and values as democracies.  And we believe that this partnership is just getting going.

Like the European coal and steel community facilitated energy cooperation after World War II, we hold out the hope that this emerging cooperation between Greece, Israel, Cyprus and Egypt and perhaps other neighbors, can provide a catalyst to a much broader strategic political and economic cooperation to build confidence, to build prosperity and to build peace in a strategically significant region which has not always been at the forefront of U.S. strategy, but has now emerged as an area of considerable Washington interest.  You see that from Congress in the Eastern Mediterranean Strategy Bill which was advanced in the Senate and is moving ahead in the House.  You see that in the State Department where we have a considered Eastern Mediterranean Strategy, which I should add is not an easy thing to accomplish in our bureaucracy because the Eastern Mediterranean is a strategic space which cuts across multiple bureaucratic stovepipes in our system.  For the military it’s divided between Central Command, European Command, Africa Command; and for the State Department it’s divided between the Bureau of Near Eastern Affairs and the Bureau of European Affairs.

So the fact that we’ve stepped back to take a systematic, whole of government look at how we advance U.S. interests in this region tells you how serious it is being taken as a policy proposition.

As I said, energy has moved rapidly up the agenda of U.S.-Greece bilateral relations.  It reflects all of the progress I’ve discussed earlier, and we see the prospect to do much more in the years ahead.  We see Greece playing a lager role in the Western Balkans energy story as a result of the Prespes Agreement, the conversations that have begun between Athens and Skopje.  And I was glad when I was in Thessaloniki to be joined by the North Macedonia Environment Minister who had good conversations with his Greek counterparts.

And we also talked about the possibilities there for Hellenic Petroleum and unlocking the potential for pipeline connections between the Thessaloniki refinery to deliver refined product to consumers in North Macedonia, but also the prospects as the pipeline comes on stream for using TAP and using projects like the IGB to unlock the GAZPROM monopoly on the Balkan gas market.  That’s already happened in Bulgaria where American gas delivered from Revithoussa is the first non-Russian gas purchased by Bulgaria.  We expect and we hope we’ll see much more of that in the years ahead.

I was really interested in Alexandroupolis to hear from the community there, to hear from political leaders how they see all these things connected.  They see the U.S. military presence is providing a security umbrella.  That’s something they welcome.  They see the privatization of the port supporting the implementation of the FSRU which supports the new gas-fired GE power plant which Gastrade and the Copelouzos group has proposed for Alexandroupolis which in turn complements and supports the privatization of the Egnatia Odos which relates to the rail link to the Port of Alexandroupolis.

So you can see, geopolitics has come back to Greece and Southeastern Europe in a big way, and energy geopolitics is a significant part of that, and Alexandroupolis is front and center.

We also are very focused on the role that American companies can play in this space in Greece.  Whether it’s the ExxonMobil offshore concession with Hellenic Petroleum and Total, which we hope very much will be approved soon by the Greek Parliament.  I’ve had good discussions with the President of the Parliament and others on that.  The renewed presence of American companies like GE and Invenergy in the renewables sector where Greece has so much potential to do more than it’s doing today, and the potential of Greece to continue expanding its role as a transshipment point.  Whether it’s through Revithoussa, the FSRU, the underground storage at Kavala, the expansion of the Thessaloniki Port.

So there’s a lot to talk about.  There’s a lot that we’re doing at the governmental level.  But to finish where I started out, I really applaud what ELIAMEP and Deree are doing because in a democracy it’s really important also that the think tank and public affairs communities are connected into this.

It’s a very dynamic moment.  It’s a great time to be the U.S. Ambassador working on these issues.  We’ve got a lot of good stuff in play, and we’ve got strong partners to work with.

So thank you very much.