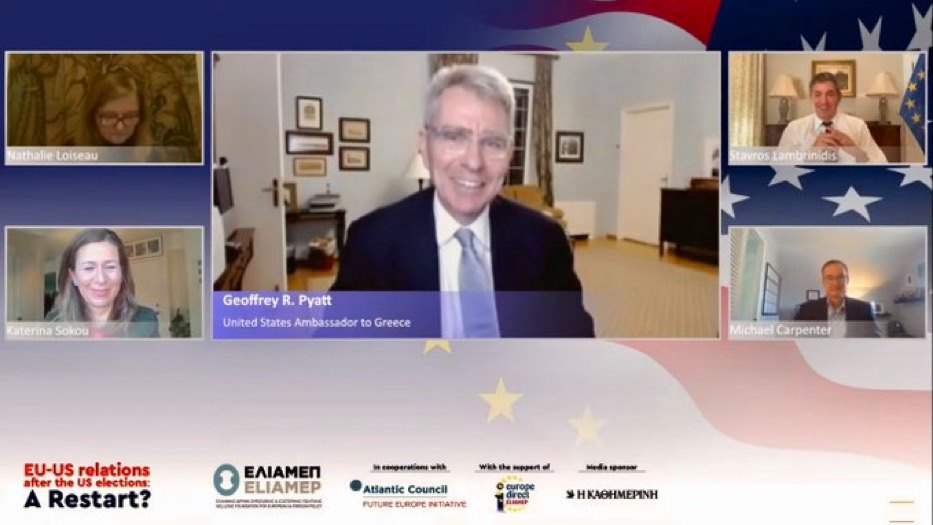 Katerina Sokou: Ambassador Pyatt, you recently said in an interview that, no matter who the American people choose, we’re in a good place as regards U.S.-Greece relations. And I was wondering, from your vantage point, what are the successes that you indicate that you can build upon for the transatlantic partnership more widely?

Thanks Katerina, and thanks to ELIAMEP for putting this together. It’s been too long since I’ve done one of their presentations, and it’s a real special pleasure to have my friends Mike and Stavros on the line at the same time.

I will answer your question, but before I get to that though, since we’ve got a Greek audience, I want to start with a larger point about what’s just happened in the United States. I’ve seen a lot of gloomy commentary about the future of American democracy, but I think that gets it wrong in the sense that we all need to recognize the really extraordinary exercise of democracy that we’ve just seen in the United States.

And sitting here in Athens, where I drive past the Ancient Agora every couple of days, you can’t help but admire the fact that in the midst of a global pandemic, with all the constraints that that presents, the United States has just had the most widely contested election in our history. More people voting and exercising their democratic franchise than ever before, local authorities that have systematically exercised their legal obligations so that the votes can be counted and we can see the results.

I would also note in this capacity something that Madame Loiseau alluded to, which is the issue of misinformation. And I think it’s really quite notable that despite some very well founded fears about efforts by our adversaries to undermine our election process, to create doubts among Americans about their voting, those efforts have been thwarted, largely thanks to systematic efforts by our national security agencies —the FBI, Homeland Security, and others —to prevent those efforts at interference. So there’s a lot for us to be proud of.

As a career official, I have an obligation now to stand aside while the process plays itself out.  But I have to say, as American Ambassador to Greece, I was really deeply touched by the outpouring of congratulations that I received on Saturday, both public and private, from Greek political leaders, from everyday Greek citizens, across the political spectrum. I think that goes, Katerina, to what you alluded to, which is the really remarkable foundation that we have built over multiple administrations now for a strong and important strategic relationship between the United States and Greece.

I also want to say, as somebody who’s spent 31 years telling America’s story abroad as an American diplomat, there are few things that are more inspiring than the story of Kamala Harris. The fact that we have somebody now poised to be Vice President of the United States, the first woman in that office, a woman of color, and the most highly ranked person with an Indian American background ever to rise to that office in our system — all of which is a reminder that for all of the challenges that our democracy faces, we continue to perfect ourselves. And as many have said, nobody has found a better system than democracy to decide our rulers. And I know that’s a principle that Greeks hold deeply, in part because they helped to invent it.

On your question of issues, I must say, I’m really encouraged. There’s very little that I would say differently from what Stavros said. I think we’ve got a fantastic opportunity to continue building in a positive direction. Obviously, job number one for all of our leaders right now is to defeat the pandemic, and in that regard, I was enormously encouraged, of course, by today’s announcement from Pfizer. Mike, what you many not know, is that aside from being a transatlantic partnership, this is also a Greek American partnership.

I got to know the Pfizer CEO Albert Bourla when I was recruiting him to have Pfizer be one of the leading American companies at the Thessaloniki International Fair in 2018. Albert supported that, Pfizer was there showing the best of American technology, and his company was one of the first to answer the challenge when Prime Minister Mitsotakis was elected last year and made it a priority to attract American investment. And so Pfizer has committed to and now established a very successful technology and innovation center in Thessaloniki, which they’re doing to advance the interests of their shareholders, but which I’ve supported because it’s another way to build these transatlantic ties, especially in a city, Thessaloniki, which has been a strategic priority for me, and it’s very much part of the wider American strategy to leverage our relationship with Greece to advance broader objectives in the neighborhood, and to advance the station of Greece as a pillar of stability that helps to advance American interests.

In terms of the vocabulary of the relationship and the question you put to us, Katerina, about where the focus would lie: I’m just going to be very brief in these introductory remarks, but I would flag three issues in particular where we work very well with the Greek government, again over multiple administrations, and of course having been nominated by President Obama and sworn in to this job by Vice President Biden, I’m in a very good position to talk about continuity in policy. But the three issues that I would flag where we work very well with the Greek government, and again under multiple Greek governments, is: great power competition; energy in all of its dimensions, which would embrace the climate issues that Mike alluded to; and then digital.

I would say first and foremost on great power competition, presence matters. And presence in all of its dimensions: economic, diplomatic, military. That’s what we’ve been doing in northern Greece over the past few years.  That’s what the Thessaloniki Fair was about.

In a geostrategically pivotal region where we face challenges from all of our adversaries, building up American presence is important, and Greece has been a key enabler of that —whether in terms of our expanded military and defense cooperation agreement, the MDCA, the expanded basing that that has facilitated; the kind of operational collaboration that we’ve achieved through our Strategic Dialogue; our practical work together through the 3+1 process, which involves Greece, Israel, Cyprus, and the United States, an initiative that I hope very much will continue in the years ahead, and which has been very important, both for establishing U.S. presence, but also for building a coalition among democracies. And then our work on the Balkans, which has been enabled by the Prespes Agreement and the way in which that has unlocked a much more strategic Greek role across the Western Balkans. And you see it in the progress that Greece has achieved in its work with Bulgaria, with Albania. So, presence, presence, presence. Great power competition.

……has in many ways redrawn the energy map of Southeastern Europe over the past few years. We’ve done that jointly with Greece through major projects like the Trans Adriatic Pipeline, the floating regassification unit in Alexandroupoli, the Bulgaria Greece Interconnector pipeline. We’ve also been helped by Prime Minister Mitsotakis’s very ambitious goal of eliminating lignite coal power by 2028. The only way you get to that in Greece is with a lot more gas, and I’m very proud of the fact that a lot of that gas in recent months has not been Russian pipeline gas but LNG, including LNG from the United States.

But this isn’t just about Greece.  It’s really about building energy security and energy independence across Southeastern Europe.  And Greece has become one of our most important partners in the European Union in advancing what is very much a shared agenda between us.

And then finally on digital issues, Stavros put it extremely well in talking about the challenge of China’s algorithmic authoritarianism. I would just note in this regard that Prime Minister Mitsotakis was ahead of the curve in terms of identifying the democracy challenges that 5G technology would bring with it, and then working with the United States on some very innovative models to secure Greece’s 5G infrastructure. And the one that’s really interesting to me — and frankly has lessons for us in the United States — is this Faistos Fund, which is a fund (audio missing) investment in innovative new applications of 5G technology. And the really good story of this, and the transatlantic aspect of it, is that the government has been very clear that they hope very much that the fantastic progress that we’ve seen on U.S.-Greece technology investment in the past few years — Microsoft, Pfizer, Cisco, Deloitte — that we can get some more U.S. startups coming in to Greece, leveraging the monies that this 5G revenue will unleash.

So we’ve got a lot to do together.  And I’m very confident that Greece, among all the European states, will be a key partner in that regard.

EU-US relations after the US elections: A Restart?