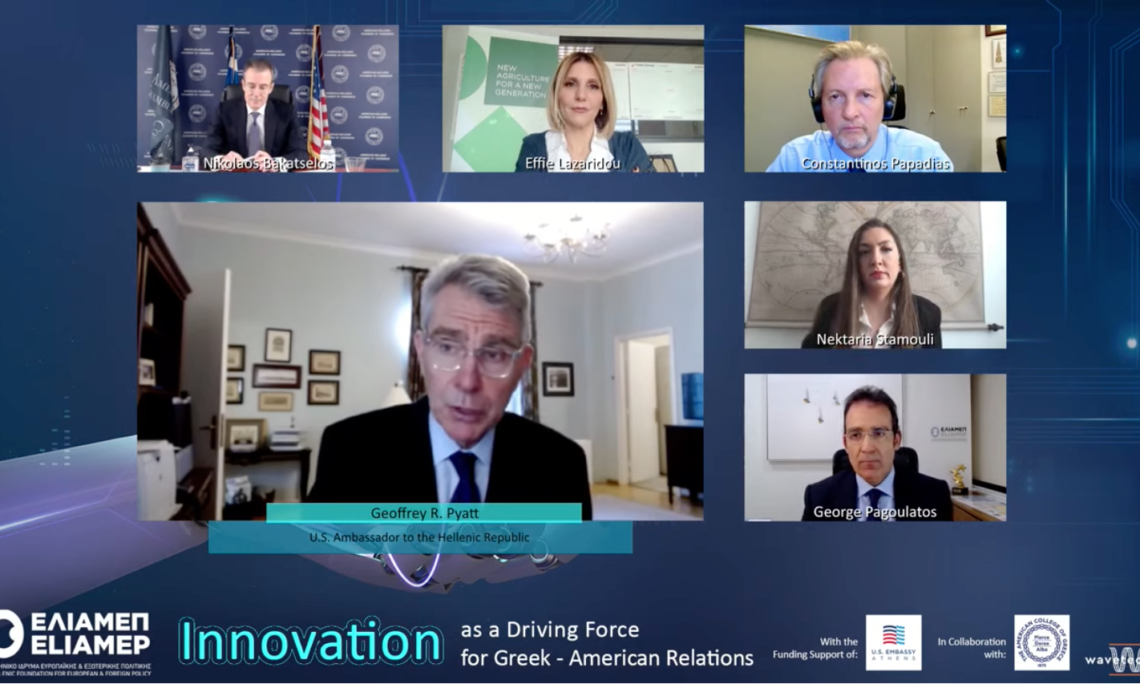 Thank you, Nektaria, great to see you.  And thank you to everybody for joining what is the fourth session of the Embassy-sponsored program on “U.S.-Greece Economic Relations and the Future of the Greek Economy.”  This is a fantastic topic, and I couldn’t agree with you more, Nektaria, that it is really important to have a conversation not just about the military and security dimensions of our expanding cooperation but also this area of innovation and entrepreneurship that’s so important.

I want to thank the whole team at ELIAMEP for partnering with us on this project, and say how proud we are of our strategic partnership with both ELIAMEP and with the American College of Greece-Deree.

I also want to thank all our speakers.  It’s great to see Effie, Niko, Constantinos.  Thank you for sharing your perspective, and I look very much forward to hearing what you have to say.

I also want to congratulate George and ELIAMEP on their really impeccable timing.  I don’t think that there is any precedent in modern Greek history for the past two weeks of good news on the Greece foreign investment front.  If you look at all of the enormous deals that have been announced, JP Morgan’s investment in Viva Payments, Meta/Facebook picking up Accusonus, and Prodege investing in Pollfish.  All three are great indicators of how American business is really starting to focus systematically on the tech sector opportunities here.

But, as everybody on this screen knows very well, none of this happened overnight.  I’ve seen tremendous progress over the past five and a half years on how our two countries work together, drawing from the greatest strengths of the U.S. economy, our ingenuity, our entrepreneurial environment, but also the fantastic human capital that Greece possesses, and the success of Greek business people literally around the world.

I am especially proud when I think about this period of the extraordinary success of the 2018 Thessaloniki International Fair, which played a really important role as a catalyst to greater American investment throughout Greece, coming at just the right time to help Greece’s return to economic growth after a really difficult decade.  But, also, in helping to put a spotlight on the knowledge-based economy, the tech sectors that have been such an important part of the story over the last couple of years.

We tried to reinforce that since 2018.  In 2020, we had the signature of the Science and Technology Agreement between our two countries, creating a framework to further advance collaboration on research and market-oriented innovation.  I am very proud of all the work that we’ve done there with the Ministry of Development.

I’m also a great fan of everything that we have going on in the university to university space, our work with Aristotle University in Thessaloniki, with FORTH in Crete, all the American Institutions, NYU, Tufts, Duke, that have come here, working with Greek Institutions including, of course, the University of Athens, working on everything from diseases to cutting-edge solar technology.

One example that I talk about probably too much because it’s such a nice fit, is a Boston-based Greek-American company, Advent Technologies, which I feel like I discovered.  I stumbled on Advent the first time at the Science Park in Patras, when they were a scrappy start-up working on some ambitious ideas for hydrogen fuel cell technologies.

Since then, Advent has won contracts from the U.S. Department of Defense.  They’ve had their IPO.  They’ve begun to make acquisitions in Silicon Valley.  But they’ve also grown here in Greece.   It’s a fantastic example of the synergy that’s happening in a really important sector.  Because, among other things, Advent is the main technology provider for the White Dragon project, which is such an important part of Prime Minister Mitsotakis’s energy transition strategy in Western Macedonia.  And, in particular, the big ideas, the giant Greek companies like Hellenic Petroleum and Motor Oil have for the hydrogen sector.

We’re, of course, hugely enthusiastic about everything the Greek government is doing in terms of digital reforms.  Kyriakos Pierrakakis is really one of the heroes of the past two and a half years.  If you look at everything that his team has done to advance governance and digital transformation of government, but also to create the kind of environment that is attracting so many American tech giants — Digital Realty picking up Lamda Hellix, Amazon Web Services, of course, Microsoft.

And there are literally, seems like every week, there is another one of these that’s announced.  We see these creating jobs and opportunities for Greeks, but also helping to grow the tech sector ecosystem in a way that’s really powerful.

We’re also very interested in what Minister Pierrakakis and his team are doing in the 5G sector, which I hope people can talk about a little bit.  All of these transformative telecom innovations which are going to be so important to shaping the knowledge economy of the future.

Couple of other quick sectors I will mention.  Obviously shipping has been part of Greek identity for three thousand years.  And we’re great supporters of what an American company ONEX has done on Syros to revive the shipyards there, their interest now in the shipyards here in the Attica region.  But also the kind of partnerships that we’re seeing, for instance, between ONEX and CISCO to establish a technology innovation center in the Cyclades to help the shipping sector move into the digital future.

Also healthcare.  Pfizer is the flagship example of that success in Thessaloniki.  But there is so much more that can be done in this area as well.

And then, finally, I would mention as something worth keeping an eye on, is all the programs that the U.S. Embassy has sponsored, many of which are also with our key diaspora partners like the Hellenic Initiative and MIT Enterprise forum, focusing on Greek young people, upskilling, groups likes Mindspace, Found.ation, MExoxo, all of which have helped to create an environment that empowers Greek young people to experiment in this technology space and move forward jointly.

So, we’ve got a lot going on.  I just touched on the climate issue which is obviously so important to our collective future, a high priority for Prime Minister Mitsotakis, but also for President Biden and his administration.

And finally, to finish where I started, and you started, Nektaria.  I would come back to this visionary strategic collaboration.  If you look at all of the areas where Greece and the United States are working together in the wider neighborhood.  Our work with the 3+1, with Greece, Israel and Cyprus, our collaboration, also, with Egypt, our work in the Western Balkans.  And, of course, we just had a historic visit by the President of Montenegro.  The Prime Minister will be going to Zagreb and Belgrade in the not-too-distant future.

And, then, as far north as the Black Sea, Ukraine.  These are all important parts of Greece’s strategic space, but they are also areas where there is a natural role to be played by Greek entrepreneurs, by Greek business, which has come out of this really difficult decade and is now well-positioned to help reinforce this new more strategically engaged phase in Greek foreign policy.

You only have to look at the example of Mytilineos.  I saw the Mytilineos partnership with GE for the reconstruction of the electrical network in eastern Libya is moving ahead.  The work that Greek companies are doing in the Middle East, in the Gulf, all of these are ripe areas for collaboration between American companies and Greek partners, like what we see between GE and Mytilineos in Libya.

And I hope that we can keep an eye on how those partnerships are going to continue to expand, especially in the immediate neighborhood where Greece has both deep historical ties but also a lot of local knowledge that American companies can leverage to their advantage.

So thanks a lot, and I look forward to the conversation.