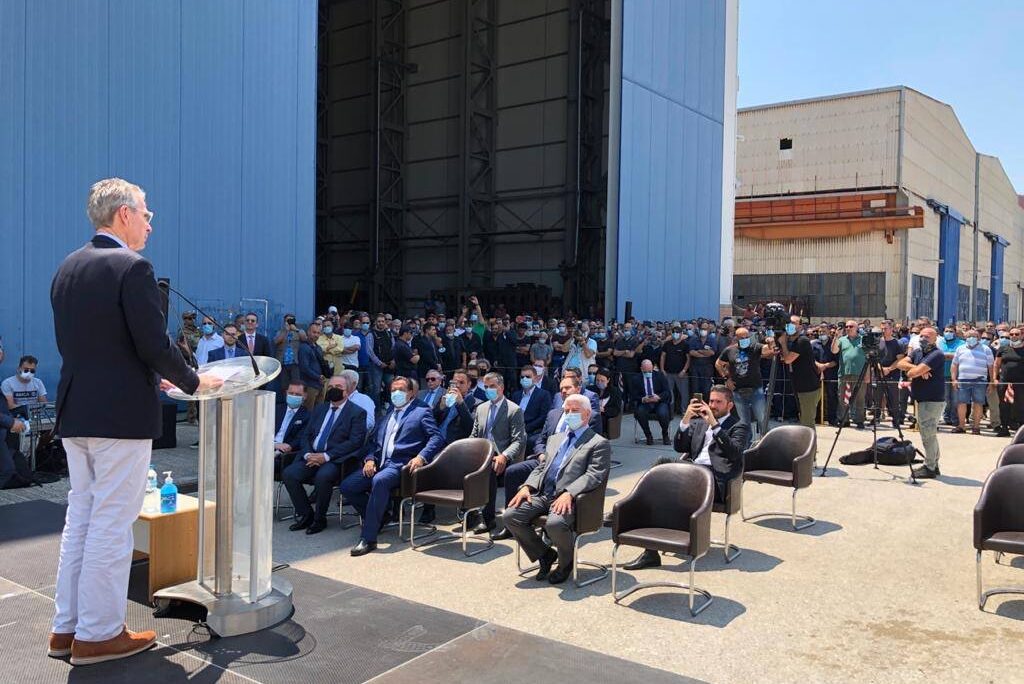 Καλημέρα σας. It is a tremendous honor for me to be here at the Elefsina Shipyard on this beautiful day with my friend Minister Georgiadis and his right hand, Minister Papathanassis, and our countryman Panos Xenokostas to highlight the opportunities we see to further develop the energy and maritime ties between our two great democracies.

Today’s event builds on a long history of maritime cooperation between the United States and Greece, which goes back to the days of the Marshall Plan and the Liberty Ships which came from America and helped to give birth to Greece’s world-leading shipping community.

As the Minister has described, we are especially pleased that the United States International Development Finance Corporation has signed a retainer letter with ONEX to pursue the purchase and renovation of the Elefsina Shipyard, building on what Minister Georgiadis appropriately described as the miracle of Syros.

Starting last year, Minister Georgiadis has been the champion of this project, working with the Development Finance Corporation the highlight this strategic infrastructure both for the asset it represents but also for the signal that U.S. government support for this investment provides to the broader international investment community. The support which he has achieved reflects the backing of the most senior levels of the U.S. government, including of course Adam Boehler at the Development Finance Corporation but also Secretary of State Pompeo, who is the chair of the DFC board, and Commerce Secretary Wilbur Ross, somebody who knows the Greek maritime industry as well as anybody in Washington. In its retainer letter, the Development Finance Corporation highlighted ONEX’s record of success in revitalizing the Neorion Shipyard and emphasized the potential of this project to support significant job creation in Greece.

In this regard, I want to address myself for one minute to the workers of the Elefsina Shipyard. Three years ago, soon after my arrival in Greece, I had the opportunity to visit the Syros Shipyard when it was in a circumstance much like we see today at Elefsina. I then returned last December with Minister Georgiadis and saw how ONEX had revitalized the strategic asset and created a driving power for the economy of Syros island. It was also in Syros that I had the opportunity first to meet with some of your colleagues, the workers of the Elefsina Shipyard, and promised to do all that I could as U.S. Ambassador to help replicate the ONEX success. So, I am very happy to say today that we are now, with the DFC letter, a significant step closer to that objective.

A successful investment in the Elefsina Shipyard will be good not only for you, the workers, but also for the U.S.-Greece trade and investment relationship and will establish Elefsina again as a critical hub including for the support of LNG tankers, recognizing that Greek-owned LNG tankers account for over 15% of global tonnage.

ONEX’s vision, which my government shares, is to make Elefsina the main shipyard for supporting Greek, U.S. and international shipowners in the Eastern Mediterranean. With ONEX’s investment, Elefsina can become again a world-class facility, supporting the growing number of LNG ships, the U.S. Navy 6th Fleet, floating regassification units and offshore platforms, and other defense and commercial vessels.

I want to conclude by emphasizing how much the United States values our maritime partnership with Greece, the long traditions of relations between Greek shipping and the United States, the critical support that Greece provides to the U.S. Navy through NSA Souda Bay, and through the additional opportunities that we see in ports like Alexandroupoli as a result of our expanded defense cooperation agreement. So, we are committed to this partnership. We are committed to this alliance, and I personally am committed to the partnership with Minister Georgiadis, which is helping to achieve so much for both of our countries. Ευχαριστώ πολύ.

Ambassador Pyatt’s Statement to Media at Elefsina
The Minister covered most of the key issues. What I would simply emphasize is the U.S. government’s commitment to continuing to partner with Greece and with the Greek government, recognizing the critical importance that Greece is playing on regional energy issues on regional security and stability, and the long history of maritime cooperation between our two countries. This facility brings together all of those pillars of our relationship and as the Minister alluded to, we appreciate greatly the fact that we are building this partnership not just with the support of the Prime Minister, with the Ministry of Economy, but also with the Ministry of Defense and with Minister Panagiotopoulos, and with the Ministry of Energy and Minister Hatzidakis. This project, as ONEX implements the rebirth of Elefsina, will bring together all these strands in a way that reflects the converging strategic interests of our two governments and Washington’s identification of Greece as a critical partner to build stability in a challenging and rapidly evolving region.