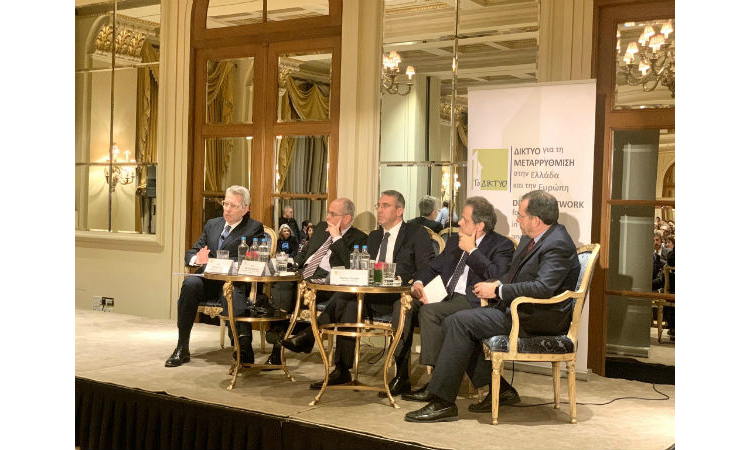 Thank you very much. Καλησπέρα σας. I will start by saying, Anna, thank you very much for the invitation. I want to thank the entire DIKTIO network for organizing this event and inviting me to be with you for what I think is a very important conversation. I also want to say what an honor it is for me to be here with my colleagues, Ambassador Özügergin and Ambassador Amrani. I think it’s a very important signal that the three of us are up here and also that none of us can say no to Anna, so I also want to congratulate DIKTIO for your new International Council, which is a really impressive group of personalities from across Europe, and I am quite confident that this new body is going to help further encourage the kind of sophisticated conversation that we really need today about Europe, the future of Europe, but also about the future of our transatlantic relationship.

Anna and I were together in Washington, DC in November for the Delphi DC conference, which focused heavily on the question of U.S. interests in the Eastern Mediterranean. It was clear there that Washington is beginning to think in a more sophisticated and systematic way about the Eastern Mediterranean and the challenges and opportunities that it presents. And certainly one of the main points of agreement between our two governments, Greece and the United States, during Prime Minister Mitsotakis’ fantastically successful visit to Washington last month was that great power competition has returned to the Eastern Mediterranean in a big way, and that the U.S. presence in this region remains essential. I look forward very much to hearing what Ambassador Loukakis has to say this evening, but I know that this is an issue where the Greek Foreign Ministry and the U.S. government are powerfully in agreement.

So the message that I want to share with you this evening, and with my colleagues from Israel and Turkey, is that all of our nations need to work together closely to ensure peace and stability in this strategically important region.

I spent some time this weekend watching the livestream, the debate at the annual Munich Security Conference, where a very large U.S. delegation, led by Secretary of State Pompeo and Secretary of Defense Esper, emphasized the critical challenges we perceive today from Russia and China, two powerful global actors who have far different interests from the United States and which clearly do not share the values that we hold in common and both of which have sought to achieve new footholds in the Eastern Mediterranean region.

Russia today, the United States believes, is running in the Eastern Mediterranean the same playbook I saw up close and personal in my time in Ukraine, seeking to destabilize the Balkans and the Black Sea and fueling the civil war in Syria and spiking violence in Libya. The migration and refugee crisis also, of course, continues to send shock waves through this region.

And major energy developments, including progress on the IGB pipeline with Bulgaria, the Floating Regassification Unit in Alexandroupoli, as well as the completion of the TAP pipeline from Azerbaijan through Turkey to Greece, Albania and Italy, and continued discussions on the EastMed pipeline, are literally redrawing the energy map of Europe and increasing Greece’s importance as a regional energy hub, which is helping dramatically to strengthen the energy security and independence of our European allies.

For all of these reasons, the Balkans and Eastern Mediterranean have returned to the forefront of American strategic thinking.

Washington views Greece as a steadfast and reliable partner in our efforts to help transform the Eastern Mediterranean and the wider region into a zone of cooperation and shared prosperity, beginning with constructive engagement between Greece and its neighbors on regional security and energy issues.

During my time as Ambassador, U.S.-Greece bilateral military cooperation has expanded substantially, and I would be remiss if I didn’t acknowledge here this evening the presence of Admiral and Minister Apostolakis, who played such an important role in helping us to achieve this progress.

Greece has now emerged from the decade-long financial crisis as a pillar of stability and a source of solutions to problems in this region. Greece has consistently exceeded NATO’s 2% of GDP defense spending benchmark, and we welcomed Parliament’s ratification of the updated Mutual Defense Cooperation Agreement at the end of January. My boss, Secretary of State Pompeo, aptly described the agreement as “a strategic touchstone in our defense relationship.”

The updated MDCA enables us to expand our bilateral activities at Larissa, Stefanovikio, and Alexandroupoli, and to sustain increased activity at Souda Air and Naval Bases in coordination with NSA Souda Bay, and in support of our shared NATO goals. It also allows the United States to use Congress-appropriated funds to develop mutually beneficial infrastructure projects at all these locations.

Defense Minister Panagiatopoulos emphasized in Parliament that our MDCA is a tool which enhances the U.S.-Greece defense relationship to address the challenges of tomorrow. And I would agree, having worked on these issues in very similar terms with two successive Greek governments.

We also welcome the news that Greece and Turkey this week have resumed talks on military confidence building measures, which can help to improve communications and reduce tensions in the Aegean and throughout the region.

As I’ve said on many occasions, Greece and the United States agree on the importance of continuing to work together with Turkey as a NATO Ally. I commend Greece’s leadership for its calm and mature approach in looking for the best way forward.

Leaders on both sides of the Atlantic are thinking deeply about how we can better build peace and stability in the Eastern Mediterranean. So it’s not surprising that President Trump at the end of 2019 signed into law the East Med Act, and two days into the new year, our democratic friends Greece, Cyprus, and Israel signed the East Med Pipeline Accord.

The East Med Act, sponsored by Senators Rubio and Menendez and passed with strong bipartisan support in the United States, directs our government to step up engagement in the Eastern Mediterranean and to view the East Med as a coherent strategic space. It specifically reinforces American support of the 3+1 collaboration with Greece, Israel, and Cyprus that Secretary Pompeo launched in Jerusalem in March 2019, as Ambassador Amrani knows well.

The deepening energy and regional cooperation among our four democratic nations has already led to active political and economic partnerships. Last August, under Minister Hatzidakis’ leadership and with the participation of State Departarment Assistant Secretary for Energy Resources Frank Fannon, our nations formed working groups to increase cooperation on infrastructure projects, renewable energy, energy storage, cybersecurity, and emergency preparedness and environmental protection in the upstream sector. Assistant Secretary Fannon was back in the region this month to kick off the first 3+1 working group discussion in Nicosia together with Minister Lakkotrypis.

The more inclusive the conversation is, the better it will be from the perspective of the United States. That’s why we support inviting Turkey to participate in the East Med Gas Forum, which aims to create a regional gas market among Greece, Cyprus, Israel, Egypt, Italy, Jordan, and the Palestinian Authority.

And just as the European Coal and Steel Community facilitated energy cooperation after World War II, we believe these cooperative frameworks in the Eastern Mediterranean can both have a stabilizing effect and grow into something much larger.

In recent years, Greece has become a regional hub and integrator for a number of major projects. The Alexandroupoli FSRU, the IGB, TAP, the EastMed pipeline, all underwrite political and economic stability. These significant energy investments diversify sources and routes, in contrast to projects like the second stream of TurkStream and Nord Stream 2, which only deepen dependence on Russian gas and the political vulnerability that brings. As TAP and the IGB come online, and as the East Med pipeline and Alexandroupoli FSRU move ahead, Greece will be positioned to help us further break the Gazprom monopoly on the Balkan energy market.

In his letter to Prime Minister Mitsotakis last month, Secretary Pompeo expressed the U.S. commitment to Greece’s prosperity, security, and democracy. The warmth of that letter is emblematic of the tremendous appreciation felt in Washington, from Republicans and Democrats, for Greece’s leadership role in promoting cooperation and stability in the Eastern Mediterranean.

Against the background of geopolitical competition in the Eastern Mediterranean, the United States is committed to collaborating with Greece more than ever before as strategic and economic partners, and I greatly appreciate the role that DIKTIO and others in the Greek academic community are playing to help us fulfill that vision.

Ευχαριστώ πολύ, and I look forward to hearing the conversation.