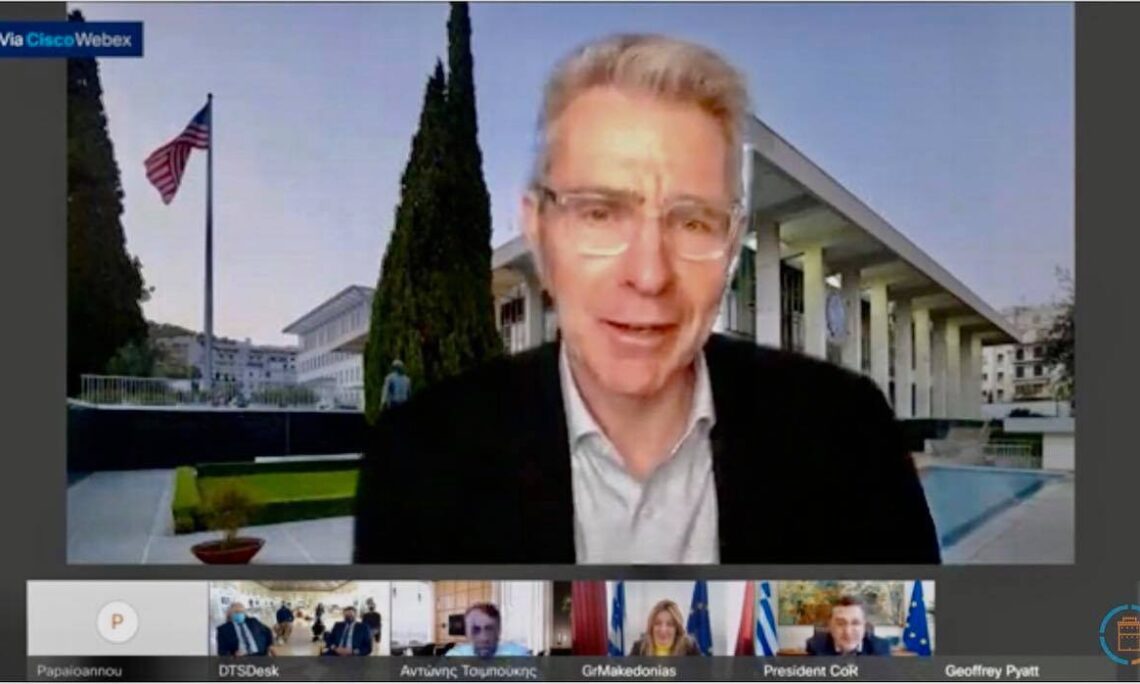 Thank you very much, and thank you both to the Cisco Hub and to DCN for inviting me and putting this event together.  The best part of it is just seeing everybody again, especially all of my friends in Thessaloniki.

In so many ways, this has been a partnership between us, between the authorities in northern Greece and the U.S. government, and it’s fantastic to see the efforts that we began at the Thessaloniki International Fair in 2018 now beginning to deliver real results.  We are very, very excited about what we’ve seen over the past few years in terms of new investments in Thessaloniki by Cisco, by Pfizer, by Deloitte, and the way in which northern Greece has put itself on the global map for the technology sector.

All of our lives have been turned upside down by the pandemic over the past year.  And again I’ll say thank you to Antonis and the whole team at Cisco for making available tools like this which have allowed us to continue our work and the great work that Cisco and other American technology companies have done to support the Greek government’s response to this pandemic.  I think it’s also worth remembering that as we now begin to look towards the end of this adventure, we all owe a huge thank you to Albert Bourla, a proud son of Thessaloniki, probably the most famous Thessalonikian in the world today, who has worked so hard with all of his colleagues at Pfizer to bring the reality of vaccines to the global community.

I also want to say, it’s a huge pleasure for me to be here with Minister Pierrakakis.  If there is one positive aspect of this terrible year, it has been the dramatic transformation that Minister Pierrakakis and his team have achieved with the digital modernization of the Greek state, the remarkable progress that Greece has made with the application of technology and especially American technology tools to make democracy more responsive and more effective.  We see it today with the deployment of the digital system for vaccination.  We could probably use something like that in the United States, where I know in the case of my own parents, we have my siblings online trying to get their appointments lined up through the portals that the state of California has made available.

So again, Minister, you and your team deserve enormous credit for all that has been accomplished, and also the way in which Greece has grabbed attention, and not just in Thessaloniki, but from big American companies like Microsoft, Amazon Web Services, Digital Realty, Applied Materials, which have made big investment commitments across Greece, recognizing the value proposition offered by Greece’s technology space.

I’m also very proud of how American technology companies are reaching out to other parts of Greece.  I’m very glad we have Mayor Papastergiou on here, and I will tell you, Demetris, I talk about Trikala all the time with my Embassy team and remind people that Trikala was the test bed for a lot of these ideas.  And I was very proud to be part of the launch in December of Cisco’s new partnership with Onex on the island of Syros to bring advanced technology tools to the maritime sector that is so important to Greece’s identity now and in the future.

We have big plans, talking about the future.  I was last in Thessaloniki with Minister Georgiadis.  We signed our Science and Technology Agreement right next to the Cisco Hub there, and we look forward to leveraging that agreement to open new avenues for technology cooperation.  We’re also very pleased to see what Greece is doing in terms of its policy measures, whether in the Digital Governance Code, the modernization of Greece’s intellectual property regime, and then, crucially, the subject of today’s discussions, Greece’s sensible, prudent approach to the question of its 5G networks.  On this, Prime Minister Mitsotakis was clearly ahead of the curve.  We started talking about these issues when he was in Washington D.C. in January of 2020.  He made very clear his understanding that 5G technology was going to touch every aspect of our lives and would create both national security issues and also economic development opportunities, whether it’s smart cars, smart appliances, the opportunities in terms of digital medicine that have already been talked about.  And it’s really important that the government, led by the Prime Minister with Minister Pierrakakis and the rest of the team, have been so smart about approaching 5G in a way that protects our citizens’ most sensitive information.

The United States continues to be very concerned about Chinese companies like Huawei and ZTE, that are required by Chinese law to cooperate with the government’s intelligence services and to hand over data no questions asked.  And as my boss, Secretary of State Blinken made clear in his Senate confirmation hearings, we believe that China continues to be willing to do whatever it takes to gain a technology edge, including stealing intellectual property, engaging in industrial espionage, and forcing technology transfer.

So it’s really important that we build these transatlantic links.  I know Governor Tzitzikostas understands this, and we’re very proud to have him as President of the European Council of Regions to help advance that transatlantic conversation between Washington and Brussels about how we jointly address these challenges.  I also want to applaud in particular COSMOTE and their decision to build their 5G network exclusively with a trusted vendor, with Ericsson.  That sends the right signal.  We’re also very excited looking to the future about the model that Minister Pierrakakis developed with the Faistos Fund and the opportunities that will provide for investors including, hopefully, American investors to develop innovative applications for 5G technology in Greece, using Greece as a test bed for these cutting-edge innovations.

This is a very exciting time to be working on these issues.  As I said, I’m incredibly proud of everything that we have accomplished together, especially with northern Greece, with Thessaloniki, with the region of Macedonia with Mayor Zervas and his team in the Mayor’s office.  And I promise you, we’ve just started.

Thank you very much to Cisco for putting this event together, and I very much look forward to hearing the conversation and especially the ways in which Minister Pierrakakis, I know, is thinking every day about how to continue to set the pace in terms of these innovative policy structures.  Ευχαριστώ πολύ.