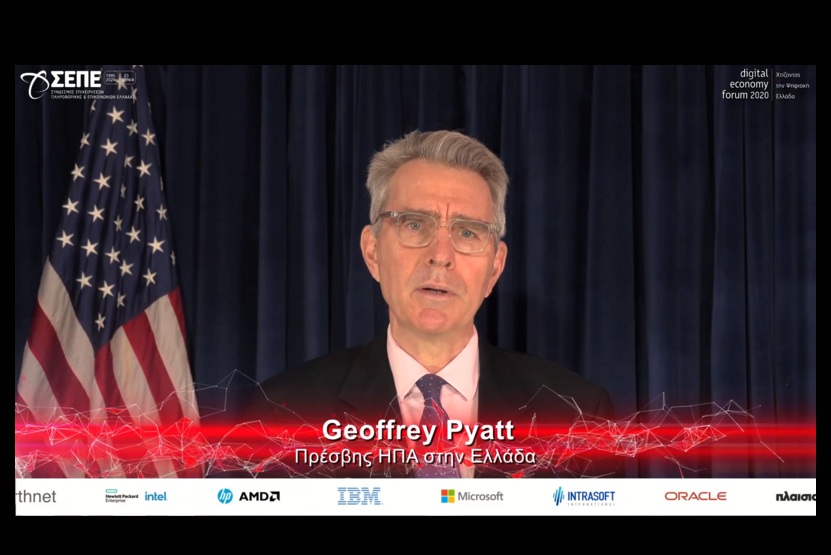 Καλημέρα σας, and thank you to SEPE for inviting me to speak at this Digital Economy Forum.

I used to say that the growth of Greece’s startup and innovation sector during the financial crisis was your country’s greatest untold success story, but now that secret is getting out.  When I arrived in Greece four years ago, I was immediately impressed by the talent and creativity of the Greek young people I met at universities, laboratories, and technology parks around the country.

These students and young professionals were hungry for opportunities to employ their skills and passions after the financial crisis narrowed traditional paths to success. They shared the drive, resilience, adaptability, and values of young people from my home state of California.  So I knew that nurturing an entrepreneurial ecosystem similar to California’s Silicon Valley could generate sustainable, long-term growth here in Greece.

The U.S. Embassy has engaged systematically in this area, helping to unlock the potential of young Greek scientists and entrepreneurs through programs like Code Girls, Tech Academy, Tech Camp, and our Greek delegation to South by Southwest.  The progress we’ve seen over these past four years is phenomenal.

Today, I’m happy to report that the word is out: Greece has garnered international attention as an emerging destination for digital investment, thanks to an enabling environment created by Prime Minister Mitsotakis and his team, strong initial interest from a number of top-tier U.S. technology companies, and ongoing support from the U.S. government and our Embassy.

The new Science and Technology Agreement that Secretary of State Pompeo signed with Minister Georgiadis in September will promote closer bilateral cooperation in basic sciences and cutting-edge research.

The State Department’s Science and Technology Adviser Dr. Mung Chiang visited Athens last month to discuss how this new agreement can accelerate the transfer of technology from the laboratory to the marketplace, further strengthening our trade and investment ties.

The United States and Greece are also working to further cooperation on artificial intelligence, cyber security, and 5G, all cutting-edge technologies where American companies and researchers lead the world.

Pfizer, Cisco, and Deloitte have expanded their footprint in Thessaloniki, and their innovation centers are recruiting hundreds of talented graduates from Thessaloniki’s leading universities.  Pfizer CEO Albert Bourla told me that Pfizer’s investment has exceeded expectations, and he just announced at the AmCham Conference that Pfizer will open a second hub in Thessaloniki, employing another 350 people.

I also met recently with Cisco’s Digital Transformation and Digital Skills Board in Thessaloniki, and was very impressed by the board’s plans to promote digital innovation, applications, and women’s empowerment in cooperation with the Ministries of Development and Digital Governance and other partners that share their mission.

I’m confident that this trend of American investment in Greece’s digital economy is just beginning.  American business leaders no longer ask me, “Where is Thessaloniki?” but rather, “Where else can we invest?”

American investors are noticing the clear signals of support that Prime Minister Mitsotakis and his government are sending about Greece’s digital transformation.

Not only has the Prime Minister’s team used the pandemic to accelerate the digitization of government, but with its recently passed Digital Governance Code, the Greek state is creating a political culture that facilitates Greece’s progress towards a digital future.

These reforms are positioning Greece for the quickest possible recovery from this year’s pandemic-induced global slowdown. And I believe that the reforms will unlock even greater growth in the coming years.

Greece was also ahead of the curve in recognizing the far-reaching impact of 5G wireless technology on every aspect of our lives – from national security and intellectual property to economic development.

We applaud COSMOTE’s decision to build its 5G network exclusively with trusted vendor Ericsson and proudly welcome Greece to the Clean Network.

I was also pleased that Wind finalized a contract for its 5G core network also with trusted vendor Ericsson, and I am hopeful that both Wind and Vodafone will select a trusted vendor to replace their existing Huawei antennas early next year.

We’re also very excited about the Greek government’s new Faistos Fund, which will support the development of innovative applications of 5G technology when COSMOTE’s 5G network launches in Attica and Thessaloniki this spring.

In coordination with our Greek partners, we will encourage U.S. investors to join the fund and invite U.S. startups to come to Greece to take advantage of this seed money, deepening our bilateral collaboration on emerging technologies.

The Greek government’s efforts have prompted leading U.S. tech firms to make big bets on cloud infrastructure in Greece.  Microsoft will invest hundreds of millions of dollars in a complex of data centers around Athens that will help to position Greece at the forefront of European cloud computing services.

The new technology infrastructure will make Greece an even more appealing destination for digital nomads, who are already drawn to your world-renowned climate, food, and hospitality.

Together with the Greek government’s announcement of tax incentives for digital migrants, this new infrastructure has enormous potential to attract highly skilled expats and reverse the brain drain of the past few years.

American tech giants will provide Greece’s workforce with the latest skills they’ll need to succeed in the new professional landscape.  Microsoft has committed to training 100,000 young Greek professionals and students in digital technologies.  And Google has committed $1 million in grant funding to provide digital skills to vulnerable groups.

Based on these commitments, we can begin to imagine how STEM education and employment opportunities with U.S.-affiliated companies and programs will prepare young Greeks to create innovative products that will further attract direct investment.  We hope this multiplier effect will pay dividends for years to come.

Greece has become the distribution hub for these companies in Southeastern Europe because of its skilled tech workforce and rich natural resources.  ConsideringPrime Minister Mitsotakis’ ambitious goal of eliminating lignite coal power by 2028, the green energy sector is ripe for further U.S. investment.

With growing interest and support from the U.S. business community, Greece is on track to become a magnet for technology and innovation in Southeastern Europe and the Western Balkans.  I’m confident that these investments will help contribute to greater stability and prosperity in the region while putting more talented Greeks to work.

Greek citizens are known around the world for their passion, resourcefulness, and ingenuity.  We are committed to working with Prime Minister Mitsotakis and his team to unleash this power of the Greek people and the Greek economy.

Our shared values and our belief in the power of hard work is the reason why the Greek diaspora in the United States is so successful, and it’s what drives Greek success stories like Think Silicon and Softomotive.  It’s personified by Pfizer CEO and Thessaloniki native Albert Bourla, whose COVID-19 vaccine is leading the fight against the global pandemic.

We will do everything we can to keep up the momentum in our trade and investment relationship as we enter the post-pandemic recovery period and a new administration takes power in the United States.

I’m confident that as Greece celebrates its 2021 bicentennial, it will also be forging towards a bright and dynamic digital future, hand in hand with the United States.