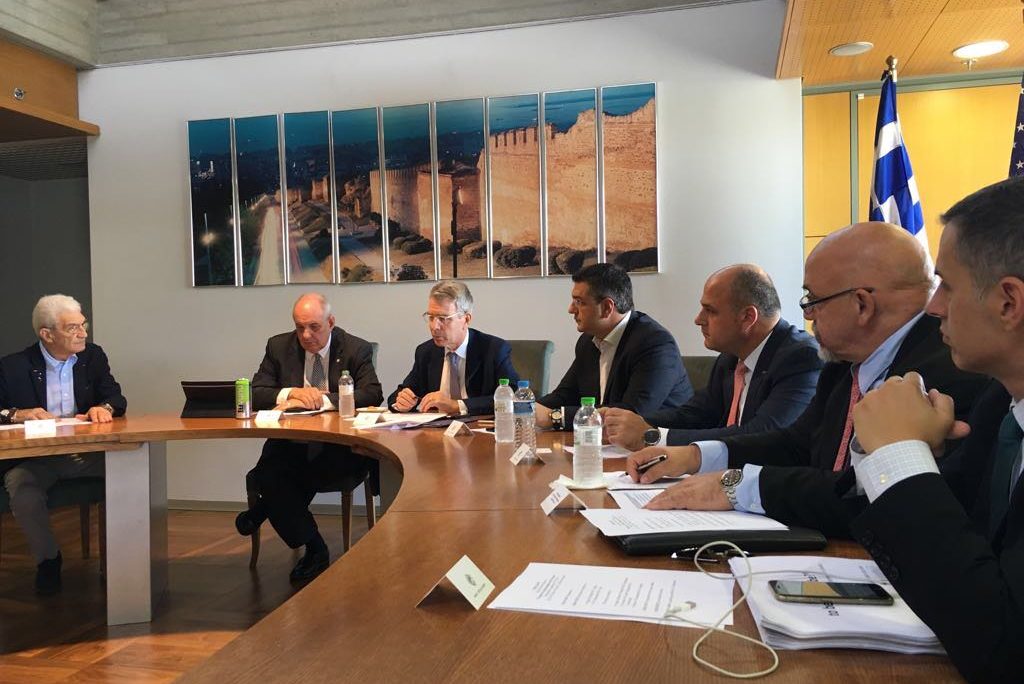 Ambassador Pyatt:  — and I will be very brief because I know you want to hear from the participants.

Let me start by thanking Deputy Minister Terrence Quick, Maria, the whole Foreign Ministry team.  First, for putting this event together, but also for the terrific work that Minister Kotzias and the rest of the Foreign Ministry have done to build this relationship between Greece and the United States.

I know especially for you in the business world the work of diplomats and foreign ministries can seem rather abstract from time to time, but I think the work that is being done between Foreign Minister Kotzias, Secretary of State Pompeo, the Strategic Dialogue that we will launch between our two countries later this year is of real value in the business world and that’s reflected in the fact that two of the key pillars of our Strategic Dialogue will focus on business and economic issues.  We have a commitment to working together on energy and then we will also have economic and commercial cooperation as one of our lines of effort.

So thank you, Minister, and thank you to the A7 Division and everybody else who works on this relationship day to day.

I want to underline to all of you as you heard very clearly from Secretary of Commerce Ross on Saturday, the Trump administration’s strong commitment to our bilateral relationship and to capturing this positive moment.  I also want to echo the point that the Minister made about the importance of the Diaspora in that relationship.

A lot of you know I have invested a lot in helping to build the Diaspora ties.  I see it as one of the great assets of the bilateral relationship that helps to stabilize and advance what we’re doing together.  I’ve put a lot of energy into the embassy’s dialogue with the key Diaspora groups like AHEPA which is here, of course, at TIF, like the Hellenic Initiative, like AHI.

I was actually with Father Alex last night in Athens and we talked a little bit about how to continue to grow those Diaspora ties, and I’m very proud of the fact that our TIF effort, the Thessaloniki Fair, has had a significant Diaspora component.

In terms of where we are now, I think one of the big messages of all the conversations that have happened this week in Thessaloniki is the importance of capturing this moment.  The U.S. interest in supporting Greece’s emergence from economic crisis, finding ways to grow trade and economic ties.  You as members of the Diaspora play an important role in that. Phil is a perfect example.  Kelly Vlahakis from ECOS earth-friendly products, one of the TIF sponsors.  Kelly’s is an American company, but the fact that they’ve opened their first European facility here in Greece is obviously a function of her family background and her commitment to the relationship.  [Dmitri Tuvanu], another great example of an American owned company with Diaspora roots adding value to the Greek economy.

So we want to continue to look for those kinds of opportunities.

I want to give you a little sense of what we’re going to do in the weeks ahead.  First and most importantly, as the Governor knows, I am committed to the idea that TIF is not an end state. It is a launching pad for where we build forward.  We’ve got our terrific new Consul General here in Thessaloniki.  I will be back in November for the Thessaloniki Dialogue, and we will continue to work on our engagement here in Northern Greece in particular.

Meanwhile, Prime Minister Tsipras will be in New York later this month for the UN General Assembly.  Secretary of Commerce Ross has offered to travel up to New York to meet him there to facilitate the business dialogues that I know Ambassador Lalacos and the team in Washington are starting to put together for New York.

Then I will travel to Washington in November with the AmCham and Minister Kammenos for the AUSA conference and the delegation there will be focused in particular on opportunities in the defense and security realms.

So we are in no way resting on our laurels, and thank you, Minister, for your positive comments.  But we really want TIF to be remembered as I said, as both a landmark in the bilateral relationship but also a launching pad for the next stage in terms of how we work together economically.

Let me also, since he’s now returned, acknowledge the terrific support as well of Mayor Boutaris and all of hit efforts.  And I’m honored that we have both the Governor and the Mayor with us this morning.