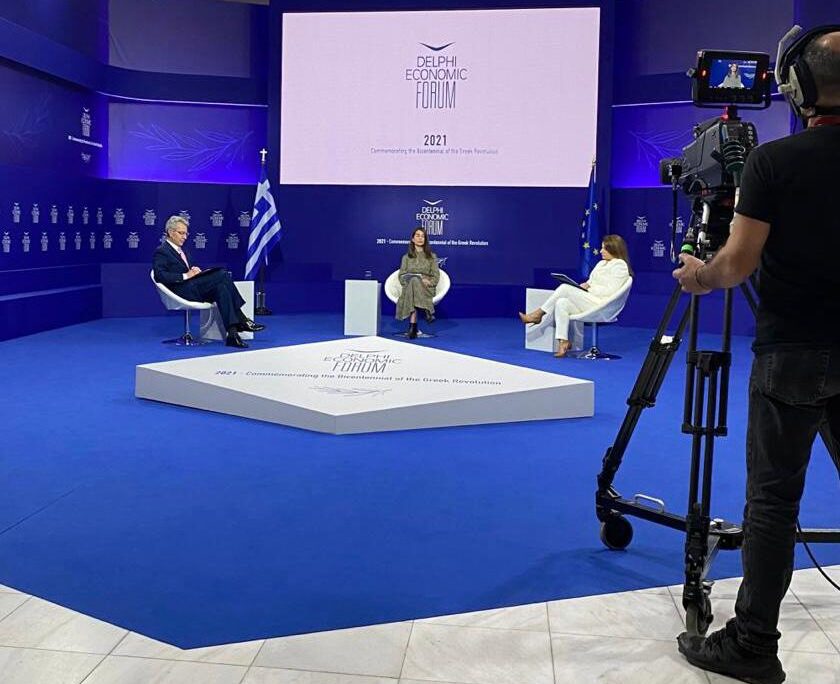 I want to start with a huge thank you, first of all to Secretary General Hormova, for being with us today and also for providing your patronage for the event.  And of course, to Stella and Pinelopi at Women on Top.  We are so proud of our partnership with you on the Inclusivity Lounge.  I also want to say thank you to Symeon and Yanni for hosting us at Delphi, and finally to Women Act for being another terrific partner in this space.

And I would flag for everybody, right after the Inclusivity Lounge this evening, you’ll have an opportunity to hear from somebody who I respect enormously, Congresswoman Dina Titus, who will have a conversation with our partners at Women Act focused on her journey in political participation in the United States.  And she’s both a great friend of Greece and also a great personal friend, so I would encourage everybody to tune in for that.

I love your focus this year, Stella, on “The Future of Work.”  Clearly, the pandemic has changed a lot of things and has placed additional strains on our society.  It’s also very clear that this is really just the beginning of the end.  That is, that we’re still in the process of understanding what is work going to look like in the post-pandemic era?  How do these new collaboration tools affect the way that we all interact going forward?  And making sure, as you said, that we address issues of gender gap and gender inequality in the process of shaping this new world.

I’m very proud that we’ve got some terrific American speakers this afternoon.  Kathleen Walch and Robbie Melton in particular, and thank you to both of them for sharing their time with us.

Earlier this afternoon, I had a panel discussion that was chaired by Katerina Sokou focused on the bicentennial, which looked at the role of the American philhellenes and how the American Revolution was influenced by classical Athens and how the American Revolution in turn influenced the Greek revolutionaries.  But a really interesting part of that story is how the process of empowerment that unfolded in our country, which was only 45 years old at that point, spilled over from the philhellene movement into questions of society and politics in the United States.  So you have the example, for instance, of American women, American philhellenes, who were inspired by their experience through the philhellenic movement to become involved in the suffrage movement in the United States.

And of course, pushing for greater participation in American politics, it’s the advocacy of these American suffragettes that culminated in the passage of the 19th Amendment to the U.S. Constitution in 1920, which paved the way for women political leaders in the United States.  I’m very proud of the fact that we now have the highest ranking female political leader in our American history in Vice President Kamala Harris.  We also have lots and lots of other female political leaders in the United States.  I mentioned Congresswoman Titus earlier.  There’s another great example in Eleni Kounalakis, a dear friend, prominent Greek American Lieutenant Governor of my home state of California, who was with us at Delphi yesterday.

The United States is going to continue to work on these issues at home at the same time that we work internationally to champion issues of women’s leadership in the economic and social space, and in politics.  Because it’s crucial to the health of all of our societies and the health of our democracies.

Here at the Embassy, we’re going to continue to work on these issues, building programs to aid women entrepreneurs, to help bridge the gender gap in science and technology, to raise awareness of gender issues, which I think is so much of the story.  I had an opportunity to do this back in March, on International Women’s Day, and I had the great honor of recognizing Emine Buruci, who was the Embassy’s nominee for the International Women of Courage Award this year in the State Department.  Emine has been a fearless advocate for the Pomak community in Eastern Macedonia and Thrace, and has worked hard to increase access to education and to advocate for the female side of her community, and she’s just a fantastic example of the kind of courage and resilience and bravery that you see so often in this sector in Greece.

We’re going to continue with other programs over the course of this year.  We have a program coming up with MeXoXo focused on tourism, we’re going to continue to work with Women Act on the question of women in politics.  And then finally, we have our TechCamp in Thessaloniki, which will happen live and in person around the Thessaloniki International Fair this fall, which is focused on women in entrepreneurship and women in startups, which is an area where I see so much potential.

I want to conclude with a personal point.  I’ve been an organizational leader for about three decades now, a manager.  And the one thing that has become very clear to me is that these issues of women’s participation, women’s empowerment, are not just the right thing to do.  It’s a question of organizational effectiveness.  It enhances performance.  If we don’t bring women into the conversation, we’re not going to have our organizations—whether they’re in politics, or business, or society—operating at the maximum level.

So bravo to you guys for what you’re doing.  I look forward to the conversation today in the Inclusivity Lounge, but not just today, on a daily basis continuing to work together on these issues.  Efcharisto poli.